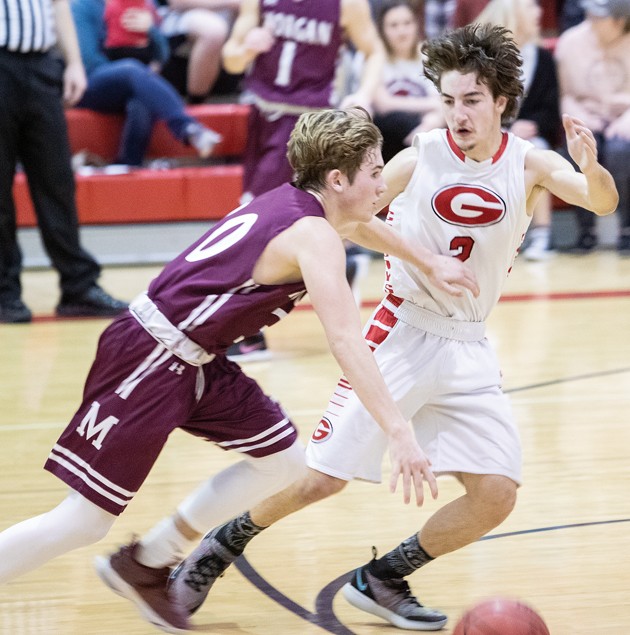 Grantsville’s Zach Capell (2) defends Morgan’s Sam Hansen during a Jan. 16 game at Grantsville High School. Grantsville defeated Summit Academy 70-57 on Wednesday in Bluffdale to pick up its first Region 13 victory of the season.

The Cowboys used 13 players, eight of whom scored in the win — Grantsville’s first of the Region 13 season.

“I’m doing my best to give everyone a shot, I want to ride with who’s hot,” Grantsville head coach Bryan Detweiler said. “We got our team through that second half through adversity. We chipped away.”

The Cowboys were down by 12 shortly after the second half started and tied the game at 44 with a 3-pointer by Jake Cafarelli with 1:05 to go in the third quarter.

The senior guard scored a team-high 18 points in the win, his career-best as a Cowboy.

“From the first 3 I hit, I just knew it was going to be a good night. It was just one of those days where the basket felt eight feet wide,” Cafarelli said. “My team came together on defense at the very end, and we played great as a team.”

Grantsville senior forward Isaac Riding started the fourth quarter with a driving layup to make it a one-point game, and junior forward Jackson Sandberg had a basket 30 seconds later to make it 50-49 Cowboys — their first lead since midway through the second quarter.

Riding hit a pair of free throws another 30 seconds later, forcing Summit Academy to call timeout with a three-point deficit.

Senior guard Izaiah Sanders hit a 3-pointer to go up by six points three minutes into the fourth quarter, capping off an 11–0 run that spanned three minutes.

“We were trying to pound it down low for the most part, then they started collapsing on that, so it opened up the arc a little bit,” Riding said.

As a team, Grantsville made nine shots from long range, and 15 of 23 from the foul line.

Helped in part by Summit Academy using fouls to slow the game down, Grantsville scored 24 points in the fourth quarter — nearly as many as the Cowboys scored in the entire first half.

Riding had two defensive blocks in the final two minutes to help the Cowboys outscore the Bears by 16 in the final period. He also finished second in scoring for the Cowboys with 16 points.

Freshman Carter Killian scored 11 for Grantsville, all in the second half.

The Cowboys improved to 1-3 in region play and will face South Summit at 7 p.m. Friday.

“Right now we have our backs against the wall,” Riding said. “All the rest of our games are going to be playoff games. We’re going to have to go out there and perform. We can’t have a night like tonight where we had a second quarter off.”