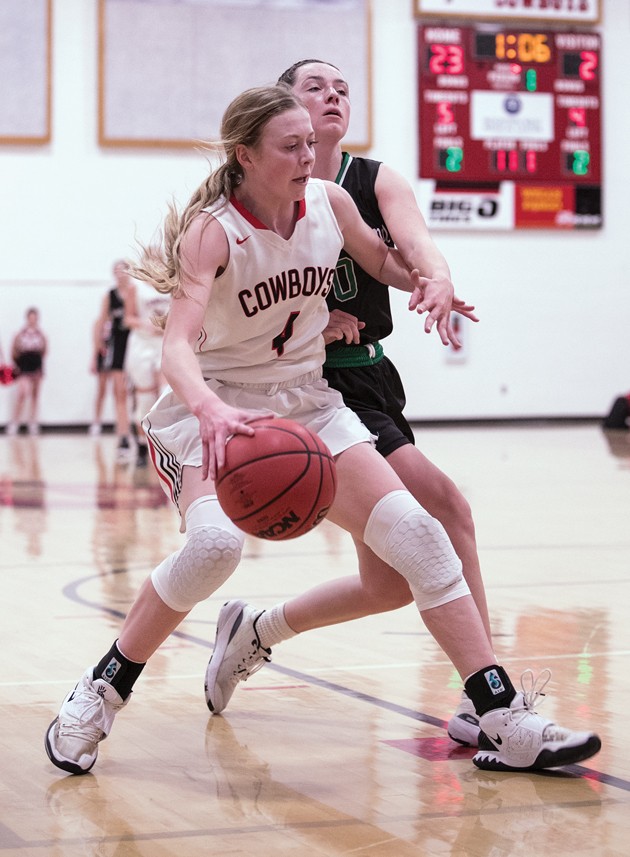 Grantsville junior Ellie Thomas (4) works her way to the basket against South Summit’s Averie Snyder during a Region 13 girls basketball game on Jan. 19 at Grantsville High School. Thomas and the Cowboys will face Judge Memorial in a Class 3A state quarterfinal game in Richfield on Thursday night as they chase their first-ever state championship.

The Grantsville girls basketball team has come tantalizingly close to its first state championship over the past few years, but has come up just short.

The Cowboys hope this year will be different, though their path to the title is filled with familiar foes. That begins tonight at 9:10 p.m., when Grantsville faces sixth-seeded Judge Memorial, a fellow member of Region 13, in a quarterfinal game at the Sevier Valley Center in Richfield.

“I think the girls are prepared,” Grantsville coach Megan Vera said. “I think they kind of have the mentality like we’ve been here. Our seniors have done this — this will be their fourth time. They don’t know anything different than playing at the state tournament. There’s a feeling of preparation and confidence.”

The Cowboys (20-3) and Bulldogs (13-4) have met twice this season, with Grantsville winning both meetings — a 53-48 triumph on Jan. 26 in Salt Lake City, followed by a 56-48 win on Feb. 11 in Grantsville. The matchup features two of Class 3A’s premier centers in Cowboys senior Maison White and Bulldogs junior Teya Sidberry, with White averaging 25 points and Sidberry averaging 18.5 in the teams’ first two meetings. White also averaged 20 rebounds to Sidberry’s 11.

Grantsville may have the advantage over Judge Memorial when it comes to depth. Emily Backus averaged 14 points per game the first two times the teams met, including 20 points off the bench in February. Sophomore guard Kenzie Allen scored seven points in each game.

“We just know that this game’s really going to come down to who executes better, who’s more focused and who faces in-game adversity better,” Vera said. “It’s definitely going to be a game of runs and there’s going to be highs and lows for both teams, so it’s going to be about the response in those moments.”

Should the Cowboys manage to defeat Judge for the third time this season and avenge last season’s state semifinal loss to the Bulldogs, they’ll be facing one of the deepest fields in recent memory in Class 3A if they want to claim the state title. A semifinal matchup against either No. 2 Emery — which beat the Cowboys in the 2019 state championship game — or No. 7 Delta, which beat Grantsville earlier this season, would take place at 5 p.m. Friday. A Cowboys loss would send them into an elimination game at 10:30 Friday morning against either the Spartans or Rabbits.

The other side of the bracket features the likes of top-ranked South Sevier, No. 4 Carbon and No. 5 Richfield, all of whom are capable of making a title run.

“There’s no weak teams,” Vera said. “You have to play your best basketball, but I feel like that’s kind of where we’re at. We’re playing well at a good time.

“There’s six or so teams that on any given night, they could be the team to go all the way,” Vera added. “I think at this point in the season, yeah, you have to be ready to execute and you have to play good basketball, but you’ve got to get some things to go your way, also. It’s going to be a fun tournament. I don’t think I’ve ever been to a state tournament where there’s so much depth. It’s going to be a lot of good basketball.”

The tournament will conclude with the championship game at 4:30 p.m. Saturday. The fifth-place game will tip off at 10 a.m., with the third-place game at 1 p.m. All tournament games will be live-streamed, with links available on the Utah High School Activities Association’s website, www.uhsaa.org.