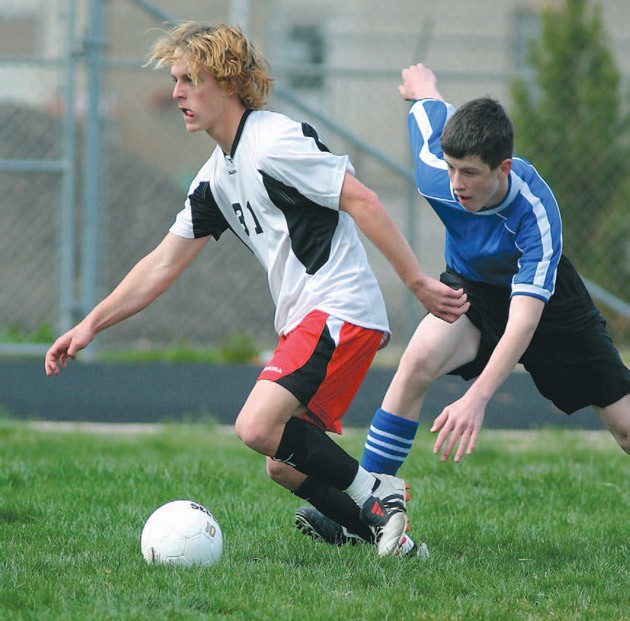 Grantsville’s Ben Smith races past a Millard defender in a match March 5 at Hurricane. The Eagles captured the victory 3-2 over the Cowboys in the preseason match. Grantsville opens Region 11 boys soccer action Friday with a 7 p.m. affair against Ben Lomond. photography/Mike Anderson

Grantsville has continued to improve its win totals and boys soccer program every spring. And the 2005 season is expected to be no exception.

The Cowboys have already notched a pair of preseason victories over Carbon and South Summit and finish the preseason slate with a 2-4 overall record.

But Grantsville has lost two non-league affairs by one goal and could easily sport a winning record heading into Friday’s Region 11 opener against Ben Lomond.

Ilan Lemmon and Ian Anderson produced a goal each to lift the Cowboys to a hard fought 2-1 triumph over Carbon March 2 in Price.

Grantsville did drop a tough 2-1 contest to Hurricane March 5 on the Tigers home field, in spite of a goal by Gordon Smith.

Millard also handed the Cowboys a one goal setback, 3-2, March 5 in Hurricane.

Tyson Cook and Ben Smith produced a tally each to keep Grantsville within striking distanced of the Eagles.

The Cowboys did lose a pair of consecutive preseason 3-0 decisions to Union March 8 and Cyprus Friday.

However, Grantsville regrouped Tuesday to whip South Summit 9-2 in Kamas to finish off the preseason schedule on a positive note.

Galana Eshete logged a hat trick while Ben Smith and Ilan Lemmon recorded a pair of tallies each. Ian Anderson and Taylor Clark also hit a goal each to complete the lopsided victory.

Now, the Cowboys have bigger fish to fry as the Region 11 schedule begins Friday.

Grantsville hosts Ben Lomond Friday at 7 p.m. on the GHS football field. The JV opens play at 5 p.m. The entry fee is $2.

Grantsville Coach Casey Walker said his team has never recorded a league triumph in three previous seasons and looks to register their inaugural region triumph this spring to keep the program headed in a positive direction.

“We are playing well right now,” Walker stated.” We’re decent but we haven’t quite reached our potential. We expect to improve and continue to work hard in practice. We’ve won a couple of matches so far and that helps the confidence of our team. But we expect to win a few region games which our program hasn’t been able to do just yet. We’re excited about the season and look forward to posting our first few region wins.”

The Cowboys start Josh Rowley in goal while Ben Smith and Tim Williamson are the starting sweeper and stoppers on the squad.

Seth Krieser and Skylar Phelps have notched down the starting defender positions for Grantsville.