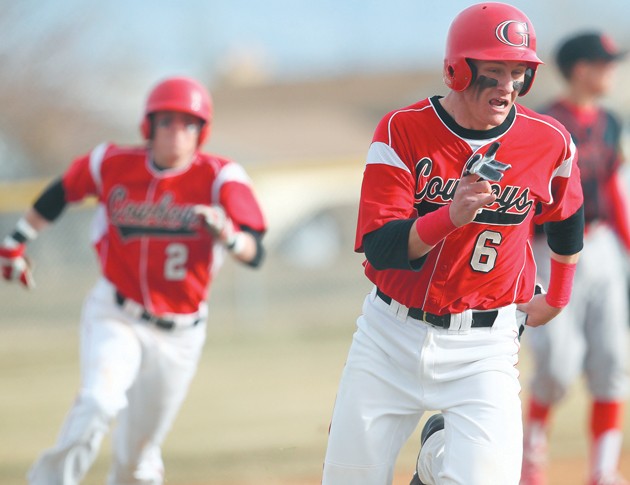 Grantsville High School senior catcher Kelby Landon (6) runs home with senior outfielder Quinton Smith (2) on his heels Wednesday to push Grantsville ahead of Park City in the sixth inning. Grantsville picked up the win thanks to that rally.

With the game tied 3-3 in the bottom of the sixth inning and runners at second and third with no outs, the Miners brought in an outfielder and put defensive players about 15 feet from home plate on the first and third baselines to guard against a bunt. The alignment left the area near third base vacant.

“I’ve seen that type of shift before, but was a little surprised they would try it this early in the season,” said Grantsville coach Loren Andersen. “It is a situation where we normally would want to bunt. With the shift it was to our advantage to hit away. We had our best hitter up there.”

Grantsville catcher Kelby Landon blasted a hard grounder where the third baseman would have been. Wyatt Smith and Dallin Williams sprinted home to give the Cowboys a 5-3 lead on the double. Landon and Clay Matthews, running for Skyler Cloward, also scored in the inning to give the Cowboys a 7-3 victory.

“Park City is a good team and it’s always good to pick up a win to start the season,” Andersen said.

Grantsville ended up with 10 hits and committed only one error in the game.

Braydon Hamatake pitched the first four innings for Grantsville with Landon Hammond pitching the final three innings of the game. Hammond picked up the victory because the score was tied when he entered the game.

Park City took advantage of an error by the Cowboys in the first inning to go up 1-0.

Landon fired a perfect throw to second base to nab a runner trying to steal in the top for the fourth. Hammond came in to pitch in the top of the fifth and retired the first three batters he faced.

The Cowboys took the lead in the bottom of the fifth thanks to a dropped ball by the Park City left fielder and hits from Landon and Cloward. Landon singled to right to start to start the inning and Smith reached on a dropped ball in the outfield. Cloward powered the ball to the right-center gap for a two-RBI double to score Landon and Smith.

Park City tied the game in the sixth inning with a pair of runs, and the Cowboys scored four runs in the bottom of the sixth for a comfortable lead.

Grantsville plays at Delta Friday and hosts Maple Mountain on Tuesday before a trip to Hurricane for the Tiger/Panther Classic on Friday and Saturday March 15-16.