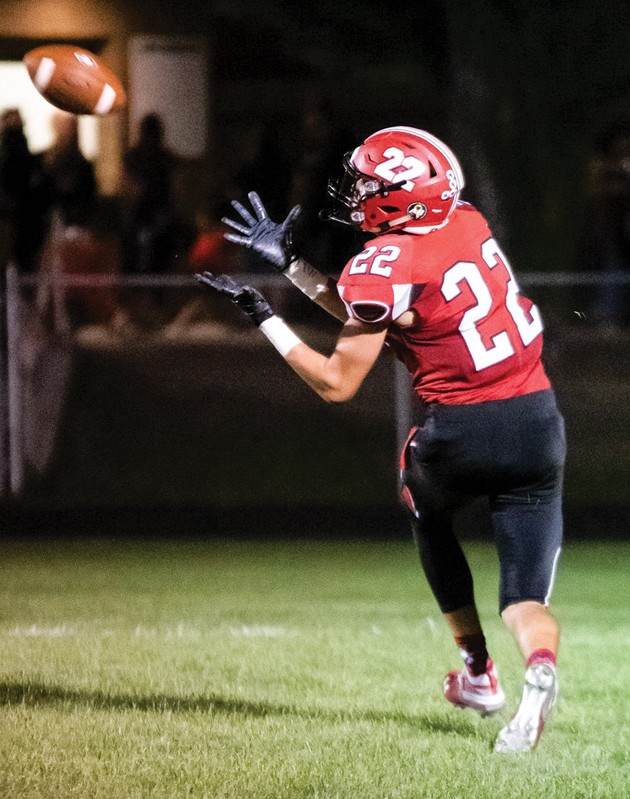 Grantsville’s Taylor Wood reels in a touchdown catch during the third quarter of Friday’s non-region football game against Delta at Grantsville High School. Wood caught one of quarterback Jackson Sandberg’s four touchdown passes in the Cowboys’ 35-8 win over the Rabbits. (Photo courtesy of Corey Mondragon)

After three nail-biters to open the season, Grantsville scored five consecutive touchdowns during the second and third quarters to cruise past Delta 35-8 in the fourth game of the season.

Grantsville showcased a wide array of weapons on offense and piled up 380 yards with 197 yards passing and 183 rushing.

“The team played really well in all three phases of the game. We worked extra hard on execution during the week,” said Grantsville coach Kody Byrd.

Grantsville’s defense held the Rabbits (1-3) scoreless until the visitors scored their only touchdown late in the fourth quarter. The Cowboys’ defense recovered four fumbles in the contest to thwart any Delta scoring opportunities.

Grantsville (2-2) marched 78 yards for a touchdown on its second possession of the game. James Fuluvaka ran for 27 yards to midfield followed by a pass-and-run from Jackson Sandberg to Ammon Bartley for 37 yards to the Delta 11-yard line. A pair of running plays pushed the ball to the 1-yard line, where Blake Thomas scored a TD on the first play of the second quarter. Nate Wright added the PAT to make it 7-0.

Grantsville’s third drive of the game went for 62 yards and another touchdown. Strong runs by Fuluvaka and Trent Brown gashed the Delta defense and Sandberg connected with Bartley on a 14-yard TD pass with 3:44 left in the first half to make it 14-0.

Players’ efforts with solid blocking helped the offense roll throughout the night, the coach said.

Delta’s offense drove to the Grantsville 9, but fumbled the ball back to the 17-yard line where Grantsville pounced on it with 56 seconds remaining in the opening half.

Sandberg rifled a short pass near the Grantsville sideline to Bartley, who shook several tackles and sprinted 83 yards to the end zone for a touchdown to make it 21-0.

“Taylor Wood came up with a key block on that play,” coach Byrd said.

The Cowboys surprised Delta and recovered an onside kick with 40 seconds until halftime. Fuluvaka ran for 25 yards and a pass to Wood took the ball to Delta 18, but the Cowboys missed a field goal attempt to end the half.

Grantsville drove 48 yards and burned six minutes off the clock to score its fourth touchdown with 1:39 left in the third quarter on more powerful running by Fuluvaka and Brown.

Sandberg fired a quick strike to Chace Gipson to push the score to 28-0.

Defensive back Kaden Kelley, who continues to specialize in taking the ball away from opponents, intercepted a Delta pass at the Delta 39. On the next play, Sandberg launched a perfect TD pass to Wood in the back of the end zone to make it 35-0 with 1:11 left in the third quarter.

Fulavaka ran 11 times for 101 yards in the game while Brown had seven carries for 71 yards.

Sandberg connected on 8-of-15 passes for 197 yards and four touchdowns.

Bartley finished the game with four catches for 132 yards and two touchdowns while Wood caught two passes for 46 yards and a touchdown.

Gipson showed his skills on kickoff returns with runs of 27 and 24 yards and added a 6-yard TD catch.