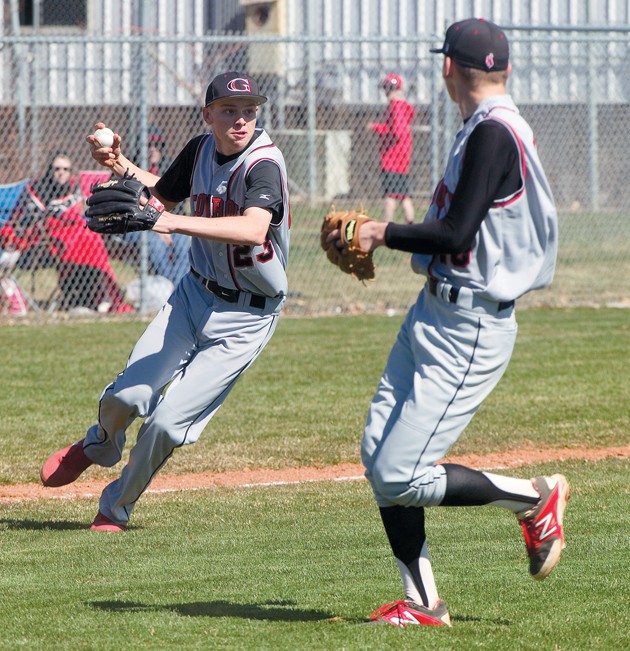 Matt Garrard sets to throw to first in Grantsville’s game against Westlake on Saturday. The Cowboys defeated Davis and lost to Westlake in the three-team pod in Kaysville.

Grantsville baseball split a three-team round robin at Davis High School in Kaysville on Saturday, beating host Davis in the first game and losing to Westlake in the second game.

Both games featured come-from-behind victories, and Grantsville found itself on both sides of those results. Grantsville defeated Davis 6-4, but then it lost to Westlake 8-6.

The Davis Darts opened with a 4-0 lead in the first two innings, but the Cowboys put together a two-out rally in the top of the third. Wyatt Barrus came up to bat with Nick Arbon standing on second base and Dallin Williams standing on third base. Barrus knocked a base hit to drive in both Williams and Arbon and cut the lead in half.

The rally continued in the top of the fourth inning. Jonas Johnson reached first base after hitting the ball right at the shortstop. The ball took a difficult hop for the Davis shortstop, and Johnson reached base. He then stole second with Kyle Peterson at the plate.

Peterson then put down a sacrifice bunt to move Johnson to third base for Clay Matthews, who knocked a base hit to right field that drove in Johnson.

Trailing 4-3, the Cowboys finally grabbed the lead in the fifth inning. Following a base hit by Barrus, Christian Kelley came in as a pinch runner. With both Kelley and Dillon Hutchins on base, Matt Garrard stepped in and blasted a long double to the fence that scored them both and gave Grantsville a 5-4 lead.

Arbon’s RBI double in the sixth inning padded Grantsville’s lead, and the Cowboys finished off the 6-4 victory.

The Cowboys and the Westlake Thunder went back and forth with the Thunder finally getting the last laugh.

Grantsville struck right away with two runs in the bottom of the first. With Ky Fisher standing on third base after a sacrifice hit by Williams, Barrus brought him home with a double, giving Grantsville a 1-0 lead. With Peterson pinch-running for Barrus, Hutchins swatted a base hit up the middle to bring home the second run.

Westlake answered with two runs in the top of the second, and it was Grantsville’s turn to score again.

Williams stepped in with the bases loaded and moved the runners over with a sacrifice hit. That scored a run to give Grantsville the lead at 3-2. Matthews scored the fourth run on a wild pitch to extend the lead back to two runs.

The next batch of runs didn’t come until the sixth inning, which is where the game turned into a roller-coaster.

Westlake struck for three runs in the top of the sixth to take the lead at 5-4. Grantsville looked at the possibility of coming away empty-handed in the bottom half when Fisher was caught in a rundown. But, the Westlake third baseman dropped the ball on the tag that would have sent Fisher back to the dugout and kept the Grantsville rally alive. With Fisher on third and Williams on second, Arbon walked to bring Barrus up to the plate with one out and the bases loaded.

Barrus grounded into a fielder’s choice, but the Cowboys managed to get both Fisher and Williams to score on the play, giving Grantsville a 6-5 lead.

However, Westlake struck with a vengeance in the top of the seventh inning, scoring three runs. The Cowboys couldn’t match it in the bottom half.

Grantsville baseball nexts hosts Morgan on Tuesday at 3:30 p.m. The game takes place simultaneously with the softball game and boys soccer game, so keep that in mind for parking.