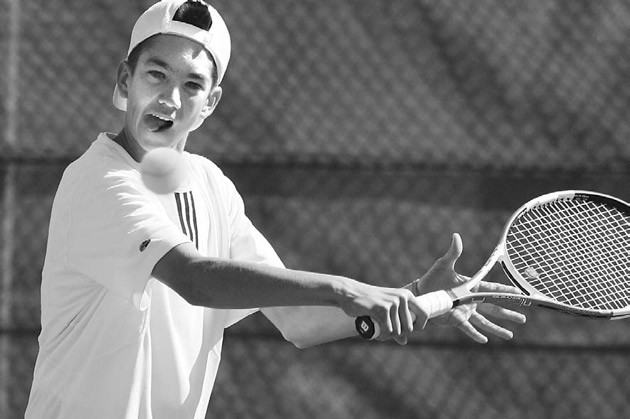 Grantsville’s Chris Elsholz concentrates on a backhand volley in a match earlier this spring. The Cowboy netter battled to the finals of the Logan Invitational Boys Tennis tournament Saturday in first singles play. photography/Troy Boman

The Logan Invitational has always been a talented and tough tournament and this year was no exception.

Grantsville battled into the finals of two of the five and placed in every division to tie for third place in the prestigious tournament Saturday at Logan.

Chris Elsholz and Logan Paulich fought to silver finishes to pave the way for the Cowboys. Both GHS netters dropped finals decisions to Ogden foes.

The tournament format was identical to the region and state tournaments and should help give the Cowboys confidence heading into postseason play next week. Grantsville also blanked league rival Ben Lomond 5-0 Thursday in Region 11 boys tennis action.

The Cowboys hit the road to Morgan today to battle the talented and tough Trojans at 3:30 p.m. Cowboy Coach David Millward said his team competed well in a tough region and state tournament format.

“We played well against Ben Lomond and it gave us confidence for the Logan tournament,” he noted. “Ben Lomond’s program is a little down this year but they have some younger players that with some work could improve their program.

“In the Logan tournament, there were some really good teams,” he noted. “There were some of the best teams in the state there. It was a great warm-up for the region and state tournament. It was the same format as region and state and will help some of our guys prepare for postseason play. I thought Chris Elsholz played well and is playing with more and more confidence with every match. He ended up playing Ogden’s top singles player for first place and continues to improve. Logan had a good tournament and also played in the finals. He came up a little short against the Ogden player but played a good match. It was a good experience to get ready for the region tournament.”

The Cowboys cruised to an early league triumph over the Scots Thursday at Grantsville.

In junior varsity play, Jared Norgan, Tyrell Turner and Bru Painter all registered singles wins while the doubles team of Casey Williams and Degan Hill battled to a doubles victory.