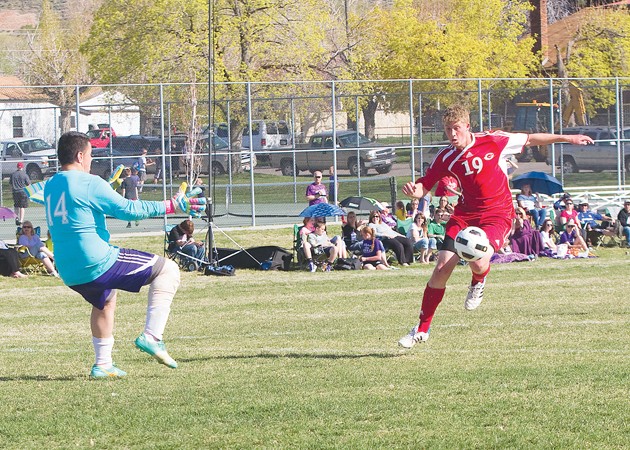 Granstville’s Benton Tripp maneuvers to make a shot on goal against Tooele in last Thursday’s 4-1 win. Tripp scored three goals against the Buffaloes.

The Grantsville Cowboys helped themselves inch closer to earning a spot at the state tournament with a 4-1 win against the Tooele Buffaloes on Friday.

Tripp’s first goal came late in the first half. The ball tailed in softly to the net with the Buffs out of position to give Grantsville a 1-0 lead.

The second goal came in the second half when Tripp blasted with his right foot to the left side of the net. That followed a play when the Tooele defense kept the Cowboys off the scoreboard. Tooele defender Cody Lemmon cleared the ball away after it slipped behind the defense, but the Cowboys came back and scored with Tripp’s blast.

The third goal was scored similarly to the first one. The ball slipped by softly and went into the net to give Grantsville a 3-0 lead.

GHS keeper Parker May had just one mistake in a game where he kept the Tooele forwards from scoring. Tooele’s Jackson Drake kicked the ball long, and it landed in the arms of May. However, the ball went through May’s arms and then through his legs into the net to give Tooele its only goal of the game.

With the score 3-1, freshman Braden Soltes went to work for the Cowboys. Soltes broke through the Tooele defenders and scored on a breakaway to make the score 4-1.

Grantsville is now just one win, or one Tooele loss, away from sealing the final playoff spot from the region. However, GHS coach Travis Lowry said he knows his team has a chance to move up even more and still get a better seed. He said he’s hoping his players don’t become content with simply making it to state.

“We’re working really hard to get them to work hard,” he said. “They’re good soccer players, but they need to change their mindset to want it. Through the Ben Lomond and Bear River games we were complacent. We’re trying to get them focused.”

Grantsville has also had a tough time adjusting on offense with the injury to Andy Harrell. He has a nagging ankle injury that will keep him out another two weeks, but Lowry said he’s confident Harrell should be rested and ready to play by the week of the state tournament.

The Cowboys next face the Stansbury Stallions, who defeated the Cowboys in overtime during their last meeting.

“The Stansbury offense is really good,” Lowry said. “We want to hold back and close on them, and hopefully we can get a breakaway against them.”

Lowry said he hopes to have solid corner kick situations against the Stallions.

“We work hard on [corner kicks] in practice,” he said. “So we’ll box it in a little bit because we’re fast and strong.”

That game against Stansbury starts at 3:30 p.m. in Grantsville.

The Tooele Buffaloes face a do-or-die situation when they face Bear River on the road Tuesday. A loss would officially eliminate them from postseason contention, giving Grantsville the final spot at state. The Buffs face the Bears at 3:30 p.m.