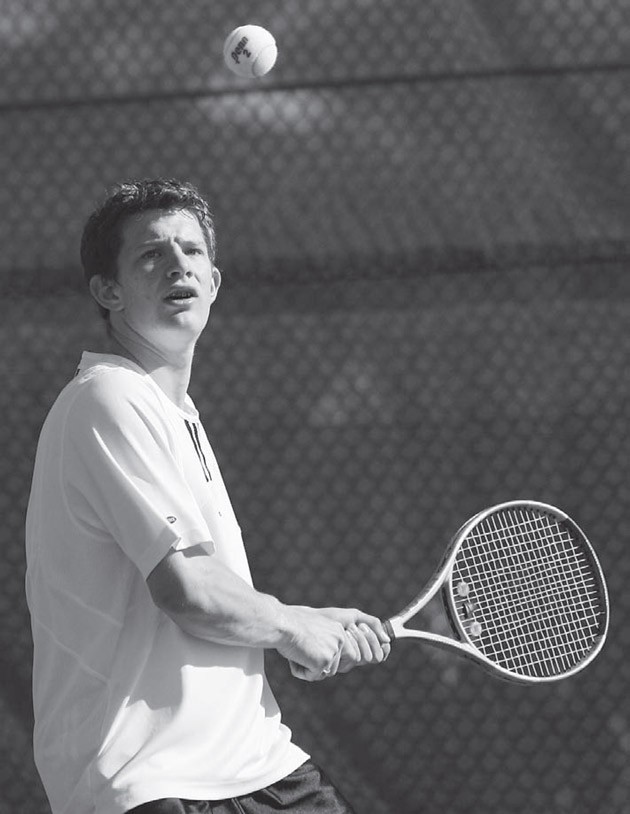 Grantsville’s Micah Watson prepares for a backhand volley in a match earlier this spring. The Cowboy netter combined with Jake Parkinson to grab third place in the second doubles division and help GHS to a runner-up status in the final team standings in Region 11. photography/Troy Boman

Grantsville knew it would be tough to capture the Region 11 Boys Tennis tournament Tuesday and Wednesday even though the Cowboys were perfect in dual matches during the league campaign.

The Cowboys knew they had to play some of their best tennis to fend off talented teams like Ogden and Morgan.

Grantsville played well but Ogden played better as a team.

The Tigers took home three of the five individual division crowns in the tournament while Grantsville and Morgan could only muster one each.

Ogden claimed the second and third singles titles as well as the second doubles. Meanwhile, Cowboy Christopher Elsholz surprised the first singles field as the fourth seed in the tournament to upset the first and second seeds and capture the coveted title in the Region 11 ranks.

Grantsville’s Jordan Nelson and Logan Paulich battled into the finals of the second and third singles divisions, respectively, but dropped decisions to Ogden foes.

Just like first-year Grantsville boys’ tennis coach David Millward predicted, the individual crowns as well as the team titles would come down to the end. In fact, only one top-seeded player in the entire tournament won his division crown, when the Tigers’ second doubles squad of Tyler Wren and Stephen Lamb claimed top honors.

Grantsville Coach David Millward said his team played well but the Tigers captured all of the big points and pivotal matches during the tournament.

“Ogden is a good team and they won the big points and they were the better team during the tournament,” he stated. “We just couldn’t win a couple of matches that would have made the difference, whether it was matches on Tuesday or Wednesday. I was really pleased with Chris. He played extremely well and it was a big win for us. We still have some work to do and we’re happy with most of our seeds. Now we’re going to try to get better for the next couple of weeks before state. We will try to make some noise in the state tournament as well.”

Ogden parlayed three individual titles into a team title while Grantsville edged out Morgan for the silver trophy Wednesday at Ogden.

The Cowboys did seize the coveted first singles crown, thanks to the sensational play of Elsholz. The Grantsville netter went into the tournament seeded fourth, behind first seed Reed Nielsen (Morgan), second seed Mike Bokinskie (Ogden) and third seed Cody Castle (Tooele) in the bracket.

But Elsholz cruised to a first round triumph with a decisive 6- 1, 6-0 decision over Bear Rivers’ Brian Lindsey in the opening round of action. Elsholz battled to a hard fought 4-6, 6-2, 6-1 victory over topseeded Nielson of Morgan in the semifinals. In the finals, Elsholz claimed the first set 6-3 but lost the second 4-6. In the third and decisive set, Elsholz rallied for a 7-6 (7-4) victory over Bokinskie in the first singles finals.

Cowboy tandem Nelson and Paulich each took top seeds in their respective second and third singles divisions. But in each case, the Grantsville duo dropped their finals matches to Ogden foes.

Nelson earned a first-round bye and coasted past Morgan’s Taylor Wamsley, 6-2, 6-0 in the semifinals.

But once in the second singles finals, the second-seeded Blake Stagg, of Ogden, seized a hard fought 6-3, 6-2 decision over the Cowboy’s Nelson.

Paulich also drew a first-round bye and handed Tooele’s Greg Auxier a 6-0, 6-0 setback in the semis. However, third seeded Chase Arneson, of Ogden, defeated runner-up seed Jake Blazzard in the semifinals and then battled past Paulich 6-4, 6-2 in the thirdsingles finals.

In doubles action, the runner-up seeded Cowboy combo of Brent Mouritsen and Josh Childs earned a first-round bye but dropped a hard fought decision to Ogden tandem Jake Sanders and Alex Stacener in the semifinals. Once in the consolation bracket, Mouritsen and Childs combined forces to topple Bear River duo Jake Bourne and Blair Harris, 6-2, 6-7, 7-6 to advance into the placing round. Mouritsen and Childs logged a 6-2, 6-4 win over Tooele tandem Denis Tillman and Brian Buzianis in the consolation bracket finals to take third place in the first doubles region ranks.

In the second doubles divisions, Micah Watson annd Jake Parkinson whipped Ben Lomond’s Steve Stringham and Jonathon Renec, 6-1, 6-4 in the first round but dropped a hard fought decision to top seeded Tyler Wren and Stephan Lamb in the semifinals.

Watson and Parkinson regrouped to beat Bear River duo of Nathan Thompson and Matt Jackson, 6-1, 6-0 and then topped Tooele duo Hayden Farley and Matt Wihongi, 6-1, 6-3, to garner the third place seed in the division as well.