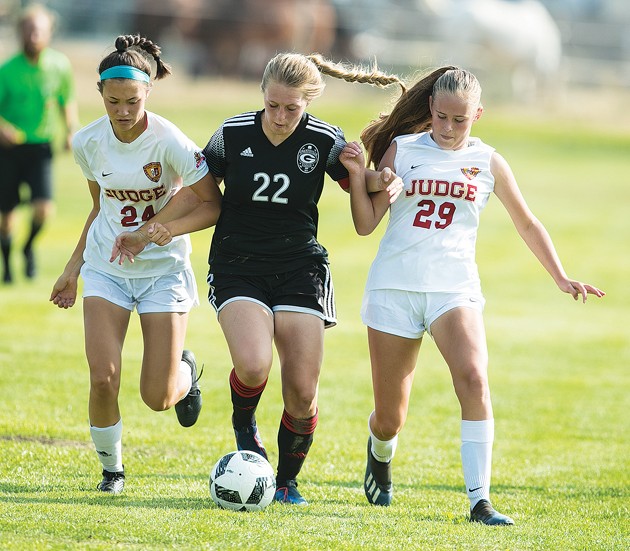 Grantsville senior Whitney Wangsgard (22) splits Judge Memorial defenders Sarah Bowler (24) and Serena DeAstis during a Region 13 girls soccer match Sept. 17 in Grantsville. Wangsgard, who scored 57 goals this season — the second-most in a single season in state history — was named to the Class 3A All-State First Team for the fourth consecutive year.

Wangsgard, who has signed to play college soccer at Southern Utah University in Cedar City, was named to the Class 3A All-State First Team after scoring a state-high 57 goals this past season to help propel Grantsville to the state quarterfinals for the second time in program history. Her single-season total ranked as the second-most in state history, behind only Toni Ouellete of Judge Memorial, who scored 68 goals in 1989. Wangsgard finished her career with 198 goals, beating the previous record of 131 set by Mountain View’s Shauna Rohbock from 1991-94.

Wangsgard’s Grantsville teammate, defender Elizabeth Whitworth, was named to the Class 3A Honorable Mention list. The junior co-captain helped anchor a solid Cowboys defense that recorded six shutouts and allowed just one goal three other times. She also added a goal and four assists on the offensive end.

Stansbury placed two players on the Class 4A Honorable Mention All-State squad. Forward Reagen Didericksen earned recognition after tying for the team lead in goals with eight, helping the Stallions put together an 11-6 overall record. She also had a flair for the dramatic, scoring the overtime game-winner in a key late-season match against Juan Diego on the road.

Sophomore Danica Silvestri was recognized for her all-around play in the midfield for Stansbury. She used her speed to put opposing defenses on their heels, and tied for third on the team in scoring with five goals while setting up a number of others.