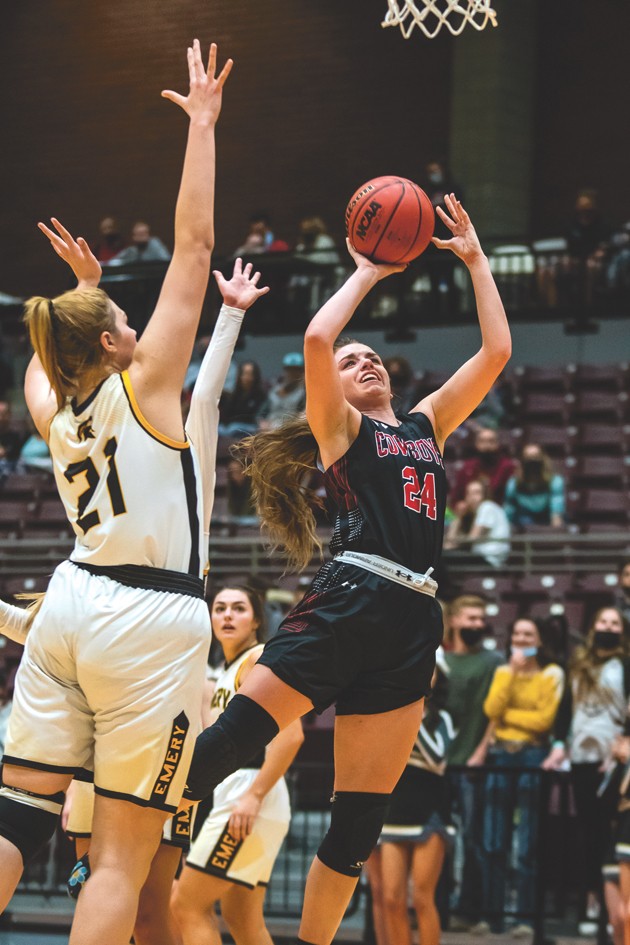 Grantsville senior Maison White (24) goes up for a shot against Emery’s Tatum Tanner during a Feb. 27 Class 3A state girls basketball tournament game at the Sevier Valley Center in Richfield. White has been named the Transcript Bulletin’s Female Athlete of the Year for the second consecutive school year.

Most three-sport athletes are really good at one of those sports, and not quite so much when it comes to the other two.

Grantsville senior Maison White is an exception to that rule. She dominated on the basketball court, earning First Team All-State recognition and a scholarship to play collegiately at the University of Colorado-Colorado Springs next school year.

She was also an Honorable Mention All-State selection on the volleyball court, and qualified for the Class 3A state track and field meet in her first year as a member of the Cowboys’ track team — and impressive feat after spending her previous spring seasons on the softball diamond.

Even in a school loaded with talented female athletes, White stood out — earning her the Transcript Bulletin’s Female Athlete of the Year award for the 2020-21 school year. It is the second consecutive year White has earned top honors among the county’s female athletes.

White began her senior year by helping the Cowboys reach the second round of the Class 3A state volleyball tournament, leading Grantsville with 49 blocks. He added 272 kills, 24 aces and 105 digs over the course of the season.

On the basketball court, the Cowboys finished third in Class 3A and captured the Region 13 championship behind their star center. The 2020-21 Transcript Bulletin High School Girls Basketball Player of the Year averaged 17.3 points and 12.8 rebounds per game for the Cowboys and finished her career as the school’s all-time leader in points (1,257) and rebounds (819).

Then, it was off to track season for White — a new challenge. She rose to the occasion, finishing 10th in the javelin (91 feet, 5 inches), while just missing a spot in the 400-meter dash final by 65-hundredths of a second with a time of 1 minute, 5.51 seconds.

While White ultimately won Athlete of the Year honors, it wasn’t an easy decision. Her fellow Grantsville High senior, Jade Garcia, was the state javelin champion (126-3) and captured the state title at 132 pounds for the Cowboys’ inaugural girls wrestling team in addition to playing an integral role for Grantsville’s cross-country squad.

Tooele senior Emma Higley, also a three-sport standout, had 156 kills, 42 aces and 219 digs for the Buffaloes’ volleyball team. She was one of the top scorers for Tooele on the basketball court, and hit .520 with four home runs, six doubles and 28 RBIs for the Buffs’ state runner-up softball team.

Stansbury’s Ainsley Thurber starred for the Stallions on the soccer pitch and the basketball court. As the Stallions’ starting goalkeeper, Thurber was a First Team All-Region 10 selection, allowing two goals or fewer in 13 contests with two shutouts. She also scored 8.6 points per game for SHS’ basketball team, snagging 4.5 rebounds per contest to go with 2.0 assists. She led the Stallions with 34 3-pointers.