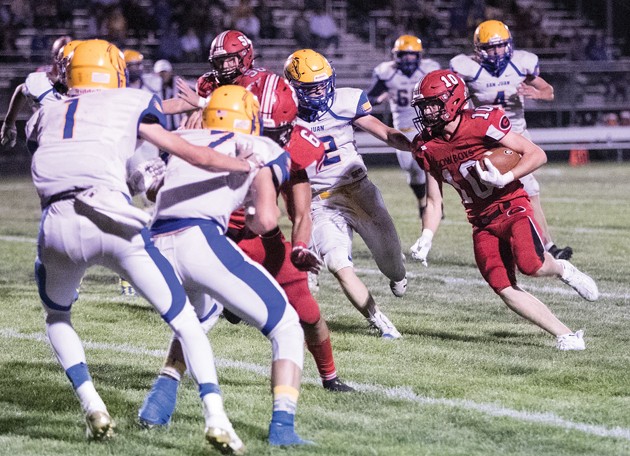 Grantsville’s Cage Johnson (10) carries the ball during the fourth quarter of the Cowboys’ 39-14 win over San Juan on Sept. 11 at Grantsville High School. The Cowboys’ four-game winning streak came to an end Friday, as Grantsville lost to Beaver 42-20 on the road.

It didn’t take long for the Cowboys to find out just how tough the Beavers can be. Fresh off of four consecutive wins in which their defense gave up just 30 total points, the Cowboys gave up 21 points in the first quarter of an eventual 42-20 loss at Beaver High School.

Beaver (6-0, 2-0 Class 2A South) used a punishing, clock-consuming rushing attack that kept Grantsville (4-2) and its potent offense off the field for much of the night. The Beavers opened the game with a 12-play, 74-yard drive that took 5:06 off the clock. Eleven of those plays were on the ground, including Turner Williams’ 1-yard touchdown run that put Beaver ahead 7-0.

Grantsville’s first drive got off on the wrong foot with a false-start penalty on the first play. It didn’t get any better from there, as Blake Thomas was stopped for no gain on first down and Noah Mouritsen was tackled for a 4-yard loss on a wide-receiver screen on second down. Then, on third down, quarterback Caleb Sullivan was hit from behind on a blitz, jarring the ball loose and giving the Beavers the ball on the Grantsville 20. Four plays later, Beaver’s EJ Allred scored on a 2-yard run to put BHS up 14-0 with 3:54 left in the first quarter.

It didn’t take long for the Cowboys to respond — and it didn’t even require the offense taking the field. Ethan Rainer took the ensuing kickoff and returned it 90 yards down the right sideline for a touchdown, cutting Beaver’s lead to 14-7 with 3:42 left. However, that put Grantsville’s defense right back on the field, and after a 42-yard kickoff return by Williams gave the Beavers the ball on their own 46, the Beaver offense went back to work. A 10-yard run by Allred on moved the ball into Grantsville territory, and after a 3-yard run by Williams on fourth-and-2 kept the drive going, quarterback Treyson Hunter hit Crayton Hollingshead for a 29-yard touchdown pass with 21 seconds left in the quarter to restore the Beavers’ two-score advantage.

Things quieted down in the second quarter until Grantsville broke through for its first offensive touchdown of the evening. The Cowboys got the ball on their own 32 with 6:19 left in the half after a Beaver punt, and embarked on a 10-play, 68-yard drive over the next 3:54. On third-and-4 from the 50, Sullivan hit Josh Staley for a 35-yard completion down the right sideline, and a face-mask penalty against the Beavers moved the ball to the 7. On third-and-goal from the 4, Sullivan was nearly sacked, but got away from the pressure and found Mouritsen in the end zone to cut the lead to 21-14.

Grantsville forced the Beavers to go three-and-out and was able to get the ball back on its own 36 with 1:17 left in the half. Three incomplete passes brought up fourth down, and punter Nate Wright saw an opening down the right sideline on fourth down. However, as he took off running, the Beavers’ defense was able to knock him out of bounds short of a first down and took over on the 41 with 52 seconds left.

Beaver’s short passing game got it into the red zone in a hurry, as completions to Hollingshead and Conner Crum got the ball to the Cowboys’ 5-yard line. On third-and-goal, Hunter found Hollingshead in the end zone with just over four seconds left in the half to put the Beavers up 28-14.

Grantsville was unable to get closer than two scores the rest of the way. A 21-yard TD run by Hollingshead on the first play of the fourth quarter extended the Beavers’ lead to 35-14, and while Thomas scored on a 13-yard run with 6:22 left in the game, a comeback wasn’t in the cards for Grantsville. Beaver added another score on a 4-yard run by Bryton Langston with 3:03 left to cap the scoring.

Sullivan was 18-for-23 for 161 yards through the air and Thomas ran for 56 yards on 18 carries. Staley had three receptions for 61 yards and Dillen Richardson caught four balls for 49 yards. Kaden Kelley had a team-high nine tackles and Thomas added seven.

Grantsville will open Region 13 play this Friday at home against South Summit.