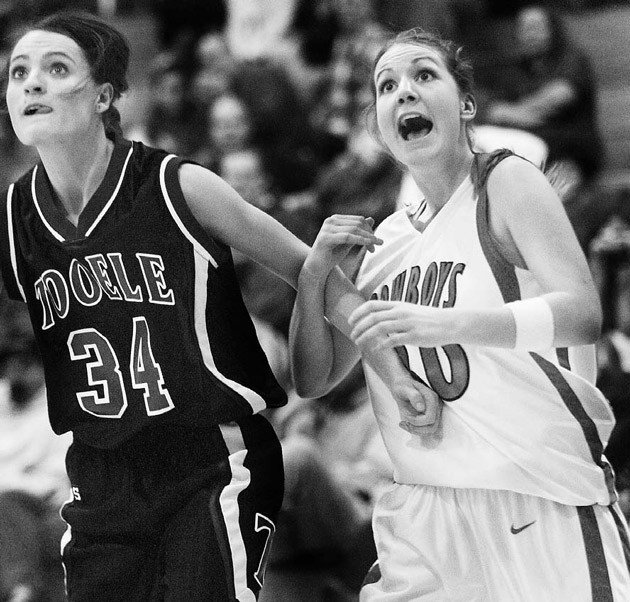 Grantsville’s Sara Hicks (right) battles Tooele’s Megan Dunn for positioning under the basket. Hicks and the rest of the Cowgirls battled to a lofty sixth place finish in the Class 3A State Girls Basketball tournament Feb. 24-26 at the E-Center in West Valley City. photography/Troy Boman

After whipping Judge Memorial one day earlier, Grantsville knew it would be a tough turn around to play a physical and defensive-minded Delta squad for fifth place.

And the Rabbits took advantage of the situation to gain early control. Delta also relished a distinct advantage at the charity stripe with eight more free throws and a balanced scoring attack.

But the Rabbits seized command of the contest with a 22-11 barrage in the second quarter and held off a furious Cowboy comeback to produce a hard fought 32-30 victory Feb. 26 at the E Center in West Valley City. Monica Christensen poured in 11 and Karilynne Corey flipped in nine to lead the Rabbits to the slim win.

Emmi Nelson led the way for the Cowgirls with 10 points while Jordan Chaney and Shalane Titmus logged six points each. Brooke Bunderson and Rachael Anderson each netted four.

Regardless of the setback, Grantsville still finished the 2004-05 girls hoop campaign with a stellar 17- 8 record for the season and a place at state.

Grantsville Coach Butch Boegler said his team fought through the difficult second quarter to make a game of it down the stretch.

“We outplayed Delta,” Boegler noted, “but unfortunately we didn’t have the kind of game in the firsthalf in terms of officiating that was conducive toward our style of play.

So we got down 10 by half. I think Delta came out timid in the third quarter and we got after it and our girls pressed better than they have in the past two years and showed great heart and determination to tie it up. We just ran out of time.”

As for the season, Coach Boegler said it was a very production and successful campaign for the Cowgirls.

“The season overall was a pleasure to coach these girls and they did everything I asked and their parents were very supportive and the administration, teachers and all employees at GHS were supportive and really encouraged the girls all year long. It was a just a great year. We’re really going to miss our senior girls. They are people with fantastic character, heart and desire. Me, personally, I will miss their commitment toward making our program an elite girls basketball program in Class 3A.”

The Rabbits erupted for a 22-11 assault in the second stanza to erase a first quarter deficit and hold on for a two-point tourney triumph Feb. 26 at the E Center in West Valley City.

Titmus popped the cords for a 3-point bomb and Nelson buried a free throw to stake Grantsville to a 4-2 cushion early. Chaney hit a layup and Nelson canned a pair of charity tosses to provide Grantsville an 8-4 advantage headed into the second period.

Christensen hit a pair of free throws and Kara Remp hit a layup to complete the Lady Rabbits’ offense in the period.

Chaney opened the second quarter and buried a 12-foot jumper.

But Delta reeled off a decisive 21-9 outburst to complete the period and build a 26-19 edge. Christensen spearheaded the barrage with 10 points, including a eight for nine performance at the free throw line during the crucial stretch. Karilynn Corey netted seven, also hitting three of four charity tosses along the way. Nelson ignited the Cowgirls’ attack with six points in the period, including a three-point play with 7.6 seconds left in the first-half to ignite the run. Chaney canned two more free throws and Titmus added another.

Bunderson countered a Mariesa Nielson free throw with a pair of charity tosses. Titmus swooped in for a layup to close the deficit to just 28-23 with 1:41 left in the third session. Anderson buried two more free throws to cut the game to a one shot affair.

Shaylee Nielson fired in a 10- foot jumper to extend the margin but Grantsville countered back with a 5-0 run to force a deadlock at 30-30. Nelson hit a free throw and Bunderson raced in for a fastbreak.

Chaney fired a perfect pass to Anderson for another layup and the game was tied with 2:16 left. However, Grantsville ran out of steam in the comeback. The Cowgirls missed their last four shots of the game and turned the ball over down the stretch.

Corey gave the Rabbits a big lift when the senior buried a pair of free throws with 1:19 left to provide the difference in the outcome.

The Cowgirls rallied for a come-from-behind triumph in the final frame over the Lady Tigers and pulled off a key victory in the Region 11 opener Jan. 6 at GHS.

Both teams battled to a 10- 10 deadlock after one quarter expired in the league contest. Nelson paced Grantsville with four points in the opening session, including a 3-point shot.

Titmus buried a 3-point bomb along the way. Chaney provided a basket and Anderson canned a free throw to complete the scoring for the hosts.

Each team also recorded eight points in the second stanza to keep the game deadlocked at intermission, 18-18. Titmus ripped the cords for her second 3-point bomb of the game while Nelson fired in a field goal and Anderson buried a pair of free throws. Larsen contributed a charity toss.

Skanchy, Shaylee Stegen, Maren Crane and Shannon Stevenson recorded a field goal each to conclude the offense for the Lady Tigers in the period and keep the contest tied at the halftime break.

Ogden outscored Grantsville 11-10 in the third period to take a slim 29-28 cushion into the final frame of the game. Crane led the way with five points. Skanchy, Jung and Brianne Daniels tossed in two points each.

The Cowgirls stayed within striking distance on four points by Bunderson and a basket each by Nelson, Titmus and Anderson.

Grantsville took charge down the stretch with balance as six players produced points to help the hosts register a 16-12 scoring advantage in the final frame of the game. The Cowgirls used four points each from Nelson and Titmus and a basket each from Bunderson, Anderson, Rika Larsen and Jordan Chaney to capture the elusive victory over the Lady Tigers, coached by Tooele High alum Phil Russell.

Stegen paved the way for the Lady Tigers with four points while Skanchy and Jung netted three each. Crane canned a pair of free throws as well.

Emmi Nelson and Shalane Titmus powered the victory with 12 points each and Rachael Anderson popped the cords for seven to spearhead the key home victory. Brooke Bunderson chipped in with six points.

Skanchy and Jung paced the Lady Tigers’ attack with 10 each and Crane fired in nine.