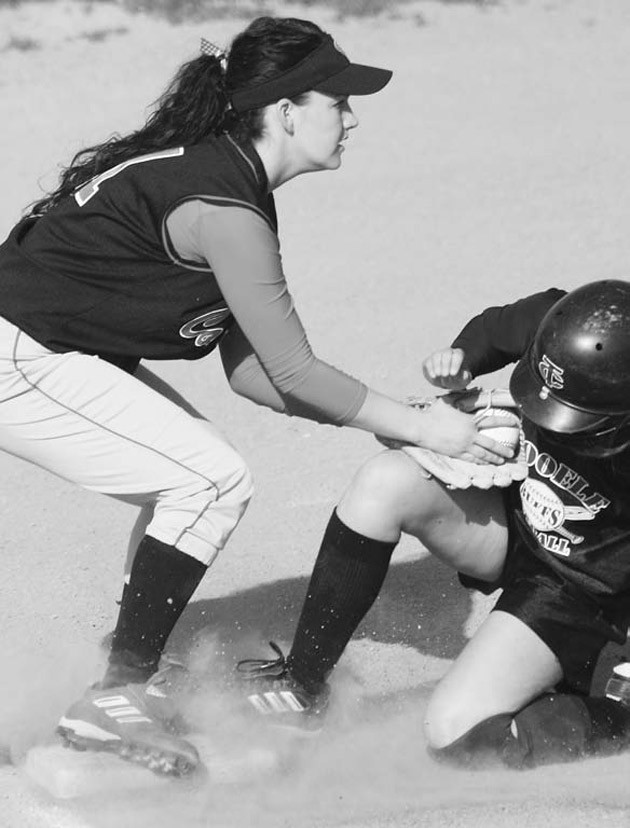 Grantsville’s Monica Aagard forces out Tooele base runner Abby Dow (right) at third base in Tuesday’s game at Grantsville. The Lady Buffs captured a 4-0 triumph over the Cowgirls in the affair. photography/Troy Boman

Grantsville and Tooele have produced some very close and entertaining games since the two joined the same region ranks four years ago.

The two perennial softball powers expected another hard fought contest Friday at GHS when the two local squads met for the first time on the 2005 softball season.

But inclement weather washed out the game and forced the event to be rescheduled.

The Tooele County squad teams did not disappoint their coaches or fans and delivered another stellar game when Tooele rallied for four runs in the fifth inning and produced the lone tallies of the game in a 4-0 decision Tuesday at GHS (see related story).

The Cowgirls have posted some impressive victories on the season and even in their setbacks, Grantsville has still played well.

Grantsville returns home to host Bear River Friday at 3:30 p.m. in another tough league bout. The Cowgirls venture to West Valley City Monday to tangle with Granger in a non-league contest at 3:30 p.m. and return home Wednesday to host league rival Ogden, also at 3:30 p.m.

The Cowgirls exploded for 13 runs in the opening inning and coasted to an easy league triumph over the Lady Trojans March 22 at Grantsville.

Emmi Nelson and Jordan Chaney opened the game with consecutive singles and Katresha Veazie reached on a Trojan miscue. Kylee Dalton and Jarell Veazie each drew a walk to aid the rally and Janeece Veazie clubbed a RBI single to keep the rally alive. Lacey Cole and Lauryl Baird also drew consecutive walks and Monica Aagard followed with a two-run single to trigger the outburst.

Chaney reached on a Trojan error and Katresha Veazie followed with a RBI hit. Dalton crushed a grand slam home run to clear the bags and aid the Cowgirl barrage. Janeece Veazie ripped a two-out triple and scored when Morgan booted a Cole ground ball and Grantsville led 13-0 after one inning expired.

The Cowgirls tacked on five more in the second stanza to provide a huge margin. Katresha Veazie ripped a double and Dalton was hit by a pitch to begin the outburst. Brittany Smith drew a walk and Rachael Anderson smacked a two-run single to open the scoring. Ashton Miller drew a walk and Rika Larsen reached on another Morgan miscue. Camille Christiansen also drew a walk and Autumn Pitt reached on a Lady Trojan error to spot Grantsville an 18-run advantage.

Katresha Veazie came within a hit batsman of a perfect game and tossed her first no-hitter of the season. The game was only three innings long due to the mercy rule. The Cowgirl hurler struck out six of the 10 Lady Trojan batters she faced in the affair.

Katresha Veazie and Janeece Veazie led the way for the Cowgirls with two hits each while Nelson, Chaney, Dalton, Anderson, Cole, Baird and Aagard all produced one safety each.

“It was great to get our first region win of the season,” noted Cowgirl Coach Bridget Clinton. “All of the girls hit the ball hard the entire game, including Kylee Dalton who hit a grand slam home run in the first inning. Katresha did an outstanding job throwing her first no-hitter of the season. Our bats need to stay hot and we need to play solid defense, especially, against Bear River on (March 30).”