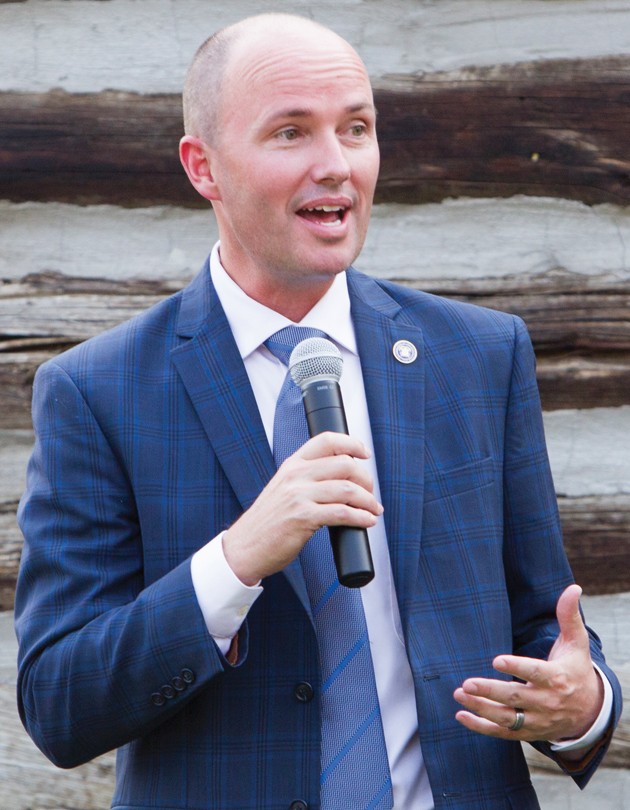 Lt. Governor Spencer Cox speaking at the Benson Gristmill in Stansbury Park in 2017.

Lt. Gov. Spencer Cox used social media this morning to officially announce his candidacy for the Republican nomination for governor of Utah in 2020.

Cox made the announcement in a video released this morning on his Facebook page and other social media.

“After much prayer and deliberation, Abby and I are excited to announce we are running for governor of the great state of Utah in 2020,” Cox said. “Serving as lieutenant governor during one of the most successful periods in state history has provided me with the knowledge and experience necessary to sustain our prosperity and take full advantage of important opportunities ahead.”

Cox is the first officially announced candidate for the 2020 governor race, which will be the first election of a governor in Utah without a sitting governor as a candidate since delegates to the Republican Party state convention denied Olene Walker a spot on the ballot in 2004.

Walker was sworn in as governor in 2003 when Mike Leavitt left the state to head the Environmental Protection agency for President George W. Bush.

Cox promises to run a different kind of campaign.

“Our campaign will be different because we refuse to let this journey change who we are,” Cox said. “Rather than showing contempt for others to get ahead, we will discuss solutions to position Utah for transformative achievements in education, transportation, water, air quality, housing and more. We are confident we will be successful, but our campaign will be a force for good regardless of the outcome. I invite every candidate to also hold themselves to this same standard.”

Cox was first elected to the Fairview City Council in 2004 and has since served as mayor, county commissioner and state representative prior to being appointed lieutenant governor in 2013. Before becoming lieutenant governor, he worked as Vice President and General Counsel at CentraCom, a telecommunications business managed by the Cox family since 1919 with operations today in nine Utah counties. In 2016, he and Gov. Gary Herbert were re-elected after winning the Republican primary by 44 percent.