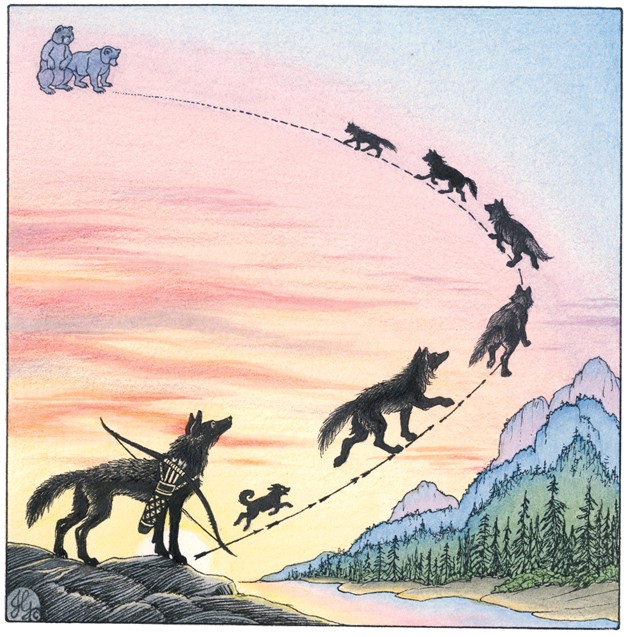 Once upon a time long ago Coyote lived with five Wolf brothers. Every day the Wolves went out to hunt, and when they returned, they shared their meat with Coyote. But late at night, the five Wolves gathered and looked up at the sky and whispered. Coyote could not hear their words.

“Nothing, nothing at all,” the eldest Wolf answered.

The next night when again they were whispering, Coyote asked the second brother. “What is it you see up there?” he asked, following their gaze to the sky.

“Nothing to concern yourself,” the second brother answered.

The next night Coyote pulled aside the third brother and said, “There is something strange in the sky, what is it?”

“What are you talking about?” the third brother said, though he too stared up at the sky, and the fourth brother nodded. “We weren’t whispering,” he lied.

Finally Coyote pulled aside the youngest brother and begged, “Please, tell me what you see in the sky.”

The youngest brother called to his brothers. “Let us tell Coyote,” he said, and at last they agreed.

They gathered around a fire to talk, and all eyes turned to the sky. “There are two strange animals up there,” the eldest brother said. “We want to know what they are.”

“I can help you,” Coyote said excitedly, but the brothers laughed. “They’re way up in the sky, Coyote,” they said. “How can you help?”

But Coyote had a plan. He was proud and creative, and he had been thinking for a long time. He gathered many arrows and stood beside the fire, shooting an arrow up into the sky. When it reached the highest point in the air, it stuck. Then Coyote aimed another arrow that stuck to the first. He aimed a third, and this one stuck to the second. Coyote shot one arrow after another until a trail of arrows reached all the way from Earth to sky.

The brothers gazed in amazement at his trail. “In the morning when there is light, we will climb to the sky,” Coyote said.

At dawn Coyote and the five Wolves and their little Dog began to climb the arrow trail. They climbed and climbed until at last they reached the top of the trail.

The Wolves were amazed to discover that the two mysterious creatures they had seen were large Grizzly Bears.

When Coyote saw the Bears, he cried, “Watch out! The Bears will eat us!”

But the Wolves were not afraid. They crept closer and closer, and the Grizzly Bears simply watched their approach, looking the Wolves up and down.

They let out a few deep belly growls, but they did not attack, and at last all five brothers and their Dog stood around the Grizzly Bears.

Coyote stood back and contemplated the scene.

“What a marvelous picture they make,” he said, and it was true. They were a glorious sight. Coyote made a decision. “I’ll leave them here in the sky. They seem to belong …”

Then Coyote climbed back down the arrow trail, and as he did, he broke each arrow behind him. When he reached the ground, the trail was gone, and the Wolf brothers and their Dog were trapped in the sky.

That night Coyote looked up at the picture in the sky. He was proud of himself for creating such beauty, but he was lonely too. His friends and brothers were gone, and he wished to share his joy with someone.

One night Meadowlark landed on a branch near Coyote, and Coyote began to talk. “Look up at the sky people I made,” he said to Meadowlark, and Meadowlark looked. So impressed was he that he began to fly everywhere, telling everyone the story of the five Wolves and the Dog in the sky.

Coyote was imaginative, and sometimes his imagination frightened him, and so once again he shot an arrow trail into the sky, and up he climbed.

When he reached the place where the Wolves and Grizzly Bears stood, he moved some of the stars in one direction, spreading them out so they made a big white trail we call The Milky Way.

“Now be careful,” he cautioned every star, and he called to the Wolves. “Brothers, you are fine just as you are. You’re perfect,” and he left the Wolf brothers and the Bears where they had been.

He climbed back to Earth, and when he looked up and saw the two Grizzly Bears pointing toward the brightest star, and the two youngest Wolves opposite in a bowl, and the two older brothers standing in what looked to be a handle, he called the shape The Big Dipper, and he smiled at the eldest brother and his Dog standing in the very center.

After that, Coyote remained all alone, and each night he stared up and sighed with pleasure at his creations in the sky.