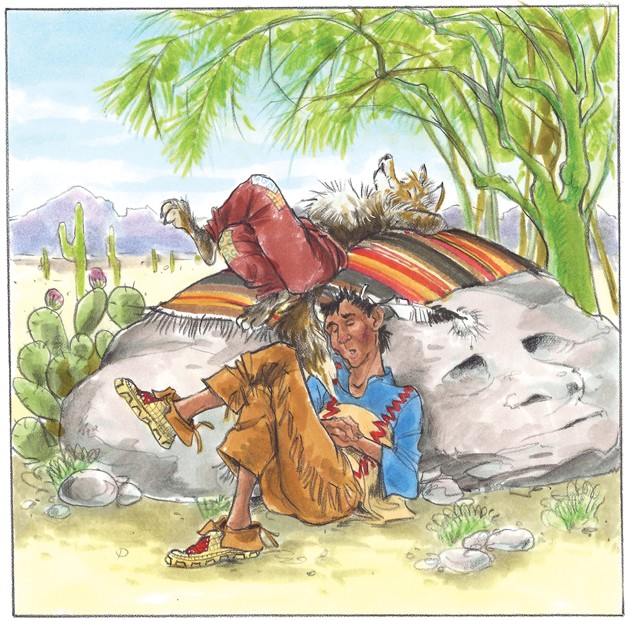 Once upon a time, on a warm spring day, Coyote was out for a walk when he came upon the trickster Iktome. They decided to walk together for a while. The sun was hot, and when they reached a big, smooth rock, Coyote said, “Let’s take a rest!” and he tossed his blanket over the rock.

But this was no ordinary rock. This was a rock known as Iya, and, naturally, Iktome knew that. But he did not say a word to Coyote.

The two rested as the sun rose in the sky, and the day grew warmer. “I don’t need this blanket. You keep it, friend,” Coyote said, and so he left it lying on the rock. “It is my gift.”

The two walked on, but soon a cloud appeared. When a flash of lightning coursed across the sky, and thunder roared, Coyote and Iktome began to run for shelter. Soon rain was pouring down from the once-blue sky, and Coyote turned to Iktome and said, “Will you go back and ask Iya to give you the blanket? We can cover ourselves with it and stay dry.”

Iktome hurried back to Iya and reached for the blanket, but the rock said, “Coyote gave it to me and what’s given is given; you cannot take it back,” so Iktome ran back to Coyote and told him what happened.

Coyote was furious. “What an ungrateful rock! I was only going to borrow it,” and with that, he raced back to Iya. He snatched the blanket that was covering the rock and said, “You’ve been out in the rain all your life. You don’t need a blanket, so I’m taking it away!”

Then he hurried back to Iktome, and as the rain fell, the two huddled under the blanket, staying dry. Well, mostly dry.

At last the rain stopped, and clouds drifted away, and the sun began to shine again. Coyote and Iktome sat together sunning themselves. “Let us eat some food,” Coyote said, and he shared his fry bread with his friend. Just as they had finished eating, Coyote suddenly heard a sound.

“What’s that?” Iktome asked, and they both looked up at the hill before them. That sound was coming from the other side.

“You go look,” Coyote said to Iktome, and Iktome hurried up the hill, but a moment later he was hurrying back to Coyote’s side. “Look out, Iya is coming!” he shouted.

And Coyote looked up just in time to see that big rock rolling over the top of the hill, and rushing downhill toward them.

Naturally, Iktome was able to climb to the top of a tree, just in time, but Coyote had to run and run. He ran as fast as he could — cursing his full belly — and he stayed just ahead of that rock.

Then he smiled to see the river ahead of him. He leaped in and began to swim across, happy to know Iya could not catch him now. Any rock would sink to the bottom of that river when trying to cross.

But to Coyote’s dismay, when Iya reached the edge of the river, he jumped in and did not sink. No, he began to swim across, chasing Coyote still.

Coyote could not believe his eyes, and he swam faster and faster.

When at last he reached the far side of the river, he raced out and into the woods, and as soon as he was deep in the forest, behind a grove of trees, he lay down to rest. But just as he had begun to catch his breath, he heard the sound of trees crashing down, and he knew that Iya was coming after him.

He leaped up and ran through the forest, out into the open prairie.

As he ran, he saw a sleuth of bears crossing the prairie. “Help!” he called out to the bears. “There’s a rock chasing me!”

When those bears looked up and saw that rock rolling toward them, they didn’t stop to help. Instead they bounded into the woods, running away.

Coyote saw a herd of buffalo, and he called out, “Brothers, help me stop this rolling rock!”

But it was too late. Before the last word left Coyote’s mouth, the Buffalo stared in wonder as Iya the rock rolled right over him, and the herd wandered away.

Later that day, a rancher was riding along when he spotted Coyote flattened out there on the prairie. “That would make a nice rug,” he said, and so he carried Coyote home and lay him beside the hearth.

All night long Coyote worked hard to pull himself back into his usual shape, and by morning he was himself again. He slipped out the window and ran away before the rancher and his wife were awake.

But he learned a lesson from that rock: If you give something away, you must give it away forever.