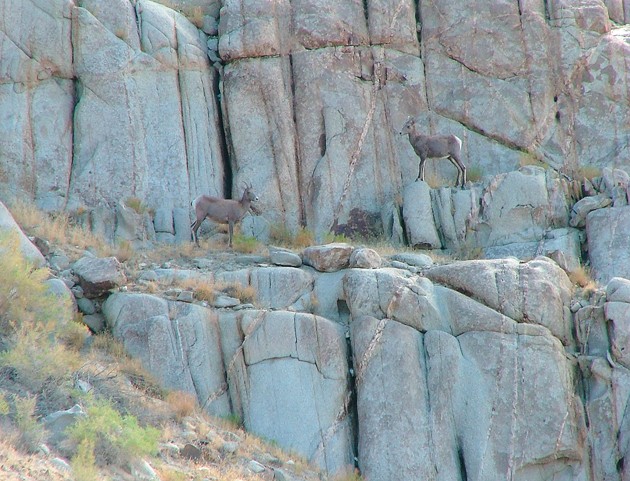 Several desert bighorn sheep I encountered in the New Foundland Range out in the Great Salt Lake Desert. These sheep are of the same variety found on the Stansbury Range.

While we may consider some of the animal inhabitants of the Stansbury Mountains to be common, when viewed through new eyes, these familiar creatures that we may even consider as pests, become fascinating and even valuable.

The first creature is one that many people go out and murder for sport because it has been deemed by local, state and federal governments to be a nuisance. The creature of which I speak is the unfortunate Coyote.

These cacklers of the desert are among the most vocal of any wildlife found in North America. It was a funny thing to listen to taps play on the Garrison at Dugway Proving Ground when I lived there, because at 10 p.m. when the music stopped, for about a solid minute afterwards you could hear coyote yipping, barking and howling in the desert as if paying their own tribute.

Coyote are really nothing more than small wild dogs. They look a lot larger than they are because of their thick fur coat and bushy tails. If you have ever given a fluffy house cat a bath you will know what a Coyote would look like if it was all wet — basically a stick figure with its hair all matted down.

Coyote have long snouts and pointed ears. Adults weigh anywhere from 20-40 pounds and they can be anywhere from 48-60 inches long including their tail, which is sometimes up to 16 inches long. Coyote eat mammals, fruit, seeds, berries, insects and carrion. They love to eat small rodents such as rabbits, mice and voles.

Coyote range from areas as small as 3 square miles to 50 square miles. Many people consider coyote to be a pest or varmint that needs to be exterminated. The federal government even has highly paid trappers who fly in aircraft over federal land and shoot coyote to control their numbers. This is done mainly to protect livestock such as sheep and young cattle. Last time I checked, the state of Utah and Tooele County were running a program that would pay $50 for each properly documented coyote.

What does properly documented mean? Well it’s kind of morbid but once you shoot the coyote, you have to turn in its lower jawbone and its scalp with ears attached or the entire pelt. In my humble opinion, coyote are part of the ecosystem and they are pretty neat animals if you look past the $50 bounty.

There is something creepy about them too because in several of my encounters with them they were always sneaking and staring right at me. On one instance, I was high up in the Oquirrh Mountains and a coyote walked up to my vehicle as I had stopped on a moonlit night to make some notes. I looked up from my writing pad and there was a coyote standing not 15 feet from my truck window, which was down. He just stared at me with his appraising yellow eyes. He was a pretty animal with a beautiful coat and bushy tail. After a few more minutes of creepy staring, he trotted off always looking over his shoulder to keep an eye on me.

Once you study these guys a bit you will hopefully be more hesitant to just go out to the desert or mountains blasting Coyote for $50. When coyote mate, they mate for life and form a monogamous pair. They run in packs of 3-8 dogs with the mated pair as the core being in charge. Pups are born in late April and early May. The mothers create dens in hollow logs or burrows and even though the mothers move the pups around once a week or more often, more than half of all litter pups perish.

These stealthy watchers of the mountains and desert are interesting creatures. Remember if you go out to blast them, you may be taking the life of a mother or father whose spouse is expecting them to return. That may make a difference to some people; others probably not. Coyote are common in the Stansbury Range, especially along the benches in Tooele, Rush and Skull valleys. For more information on the Utah State Division of Wildlife Resources – Predator Control Program, visit the DWR’s website at wildlife.utah.gov/hunting-in-utah/hunting-information/762

Another amazing creature found on the Stansbury Mountains is the Desert Bighorn Sheep. Historically, big horn roamed the Stansbury Mountains. There have been tales of large ram horns being found in the north end of the range. For some reason the animals disappeared from the Stansburys but were still thriving on ranges such as the New Foundlands out in Utah’s West Desert. Due to the fact that they were historically present, and that there is good terrain and habitat for them here, the Utah Department of Natural Resources decided to plant some sheep on the range in order to re-establish the herd.

DWR Wildlife Biologist Tom Becker for Tooele County has led the sheep program in the Stansburys. Becker said that several years ago the DWR transplanted 54 big horns from the herd on Antelope Island and then several years later augmented that number with 20 additional sheep.

The animals seem to be thriving and now number approximately 150 head. For some reason the sheep primarily stay north of Miners Canyon and seldom venture farther south than the rocky areas above Muskrat Canyon.

Big Horn Sheep are powerful animals. The sheep found in the Stansbury Mountains are of the California Bighorn Sheep variety and they are light brown and sometimes gray in color. The males can weigh up to 500 pounds and they have large distinctive curled horns that can weigh as much as 30 pounds. Only the male animals have these massive horns. The females are called ewes and their average weight is around 200 pounds. These sheep graze on shrubs and grasses and sometimes seek out mineral deposits in the form of salt licks that they enjoy.

The sheep live and travel in large herds but lack a dominant ram or leader. When mating season arrives the males establish dominance through the ritual of “ramming” or smashing their heads into each other, which creates a loud smack or cracking sound. They are good at climbing and they do so to avoid predators such as cougar and coyote. Young sheep are called lambs and females usually have one litter per year and only one lamb per litter.

These sheep can live to be up to 21 years old. It is a good thing to have them sheep back on the range. In the 1800s they numbered in the millions but just like the buffalo and the antelope, were cut down to a few thousand by the turn of the century.

However, through conservation movements, the sheep have been brought back in many areas and most of them are no longer considered endangered. I had the good fortune to see one of these animals just a few months ago. While driving back home from Dugway Proving Ground, I noticed a large creature that I presumed was a mule deer running towards the road from the trees. It was dark so I turned on my high beams and slowed down so I wouldn’t hit it.

Much to my surprise, running at full speed in front of my vehicle across the road was an incredible Desert Big Horn Ram. He had an amazing set of curled horns and was stocky with powerful legs. The speed and manner in which he moved led me to believe he might have been spooked by a mountain cat. It was an amazing thing to see this powerful animal in the wild and quite a surprise to see him that far south in the range.

In next week’s article we will look at a few more critters that you may encounter when you venture into the Stansbury Mountains.

Jessop grew up exploring the mountains and deserts of Utah. He has traveled to all 50 states, U.S. Territories and a dozen foreign countries. He, his wife and daughter live in Stansbury Park. Follow him on Facebook (JD Jessop) for more hikes and travels.