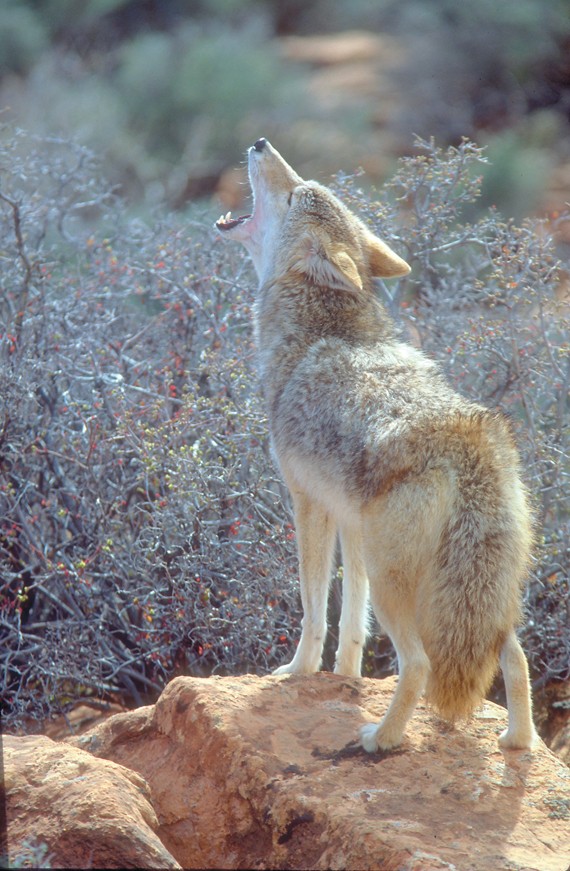 A coyote howls on top of a rock in October 2007. New funding for coyote population control will enable a $50 bounty to be paid for every coyote killed in Utah.

A state program to reduce the number of coyotes in Utah began last week and will provide hunters with a bounty for every coyote they kill starting in September, including those killed in Tooele County.

The Predator Control Program, which began taking registrations to participate in it July 1, was instituted as part of the Mule Deer Protection Act. The Utah Legislature passed the act during this year’s session with the goal of reducing the state’s coyote population to benefit mule deer. Gov. Gary Herbert signed the bill into law on March 17. Participants in this new program will receive $50 for each properly documented coyote they kill anywhere in Utah.

The Mule Deer Protection Act allocates general funding to the Utah Division of Wildlife Resources in the sum of $500,000 and the Utah Department of Agriculture and Food in the sum of $250,000. The legislation directs the two agencies to work together with other government entities to create programs that reduce and control coyote populations, particularly in areas where predation of mule deer occurs.

After registering, a hunter can begin killing coyotes, but compensation for the coyotes will not be issued until after Sept. 1. Tom Becker, county wildlife biologist for the DWR in Tooele County, said because the program couldn’t begin until the first day of fiscal year 2013, the DWR needs some time to make sure the program will run smoothly before paying out bounties.

“There’s unfortunately a delay in getting the program running because we weren’t able to do anything until July 1,” he said. “Now the program can get started.”

Hunters can register for the program by completing a free online registration form. The form is available at wildlife.utah.gov/predators. Becker said besides the online registration, hunters also need to also take a 10-question training course, which primarily focuses on ethics and the rules associated with killing a coyote and turning it in for a bounty.

The hunter must check in the coyote’s lower jaw and either the full pelt or the scalp with both ears attached. Coyote ears will be marked by the DWR to prevent double payments. Disposal of carcasses is the responsibility of the program participant.

Coyotes can only be checked in at designated sites and on designated days and times. Becker said the DWR has not determined where those sites will be yet.

“We don’t know where it will be or who it will be checking the pelts yet,” he said. “That’s part of the delay in paying the bounties. We may be taking them in on a county basis or a regional basis. It’s still unknown what we’ll require.”

Coyotes primarily kill deer fawns. Although any coyote taken in Utah can be submitted for compensation, the DWR encourages hunters to focus on deer-fawning grounds and adjacent areas. In Tooele County, Becker said the best places to hunt coyotes are in areas that are higher than 5,200 feet.

“Hunt primarily in the mountain areas until winter hits,” he said. “Then it’s important to hunt in the winter range of the deer. Coyotes will stay in deer habitat in general.”

Coyotes mate during the winter, usually in January and February. The most effective control efforts will remove coyotes after pair bonds and territories are set, and before pups are born. According to the DWR, coyote removal is less effective in late summer. That is when coyotes typically wander and disperse, often dying of natural causes in their attempts to find new territories. To be efficient, coyote control should be targeted to occur at times of the year when removals will have the greatest impact on coyote populations. Becker said the best time to hunt for coyotes is between December and June.

“During that time they have pairing going on, and they start looking for den sites,” he said. “We want to break up the pairs before they even get to mate or drop a litter. Through the spring it’s important to target areas where fawns will be dropping. We want to reduce coyote numbers in those areas so fawns have a chance.”

Becker said although he doesn’t know what Tooele County’s current coyote population is, he knows there are a substantial amount of them in the area.

“Coyotes cycle. They have times of high and low populations,” he said. “Right now we’re not at our high, but we do have a fair amount of coyotes in the county, and they’re getting smarter. Right now it’s very hard to call a coyote on the eastern half of the county.”

Becker said this is because there are a lot of unskilled coyote hunters in the area who come from the Salt Lake Valley and do not know how to properly call a coyote.

“We have a lot of people who are interested in hunting coyotes in Tooele, but unfortunately they are educating coyotes by improperly calling them or missing them [when shooting],” he said. “I suspect most of the bounties will come from trappers instead of callers.”

Becker said coyotes can be hunted on any public land, and in municipalities if the city allows it. Tooele City does not allow hunting within its boundaries. Grantsville City’s ordinances allow hunting within city limits, but prohibit the use of center fire ammunition in handguns and rifles. Hunters are not allowed to discharge a firearm from a vehicle, upon or across any highway, at power lines or signs, or without written permission from the owner or property manager within 600 feet of a house, dwelling or any other building or any structure in which a domestic animal is kept or fed, including a barn, poultry yard, corral, feeding pen or stockyard. Hunters are prohibited from entering privately owned land that is cultivated or properly posted without the permission of the owner or the person in charge of the land. A hunter is also trespassing if they refuse to immediately leave private land if requested to do so by the owner or person in charge, according to Grantsville City’s ordinance.

Becker said many people try to abuse the bounty system, but he asked that people be honest when taking coyotes.

“There are a lot of abuses that can occur with the bounty system,” he said. “We don’t know where coyotes were taken, and we don’t even know if they were taken within the state. We could be paying bounties to people from other states.”

Becker said mule deer populations are important to Utah because hunting is the second largest economic impact to the state next to skiing.

“As states start to lose their economic input into the state, that affect everybody,” he said.

Becker said because hunting is such a big impact to the state, if hunters weren’t able to hunt as much, taxes would most likely have to be raise to make up the difference. Just one year of coyote removal will not be enough to make a big change to mule deer herds, but if the program continues for the next five years, then people may start to notice a difference, according to Becker.

“The program will be on a year-to-year evaluation process,” he said. “Removing coyotes will make a big difference. It will increase our fawn survival, which will increase deer populations. We’ve had a similar predator management program going on in Vernon, and we’ve seen an increase in our fawn survival there. That’s a lot smaller area than countywide, so it didn’t take as long, but that’s what will happen.”