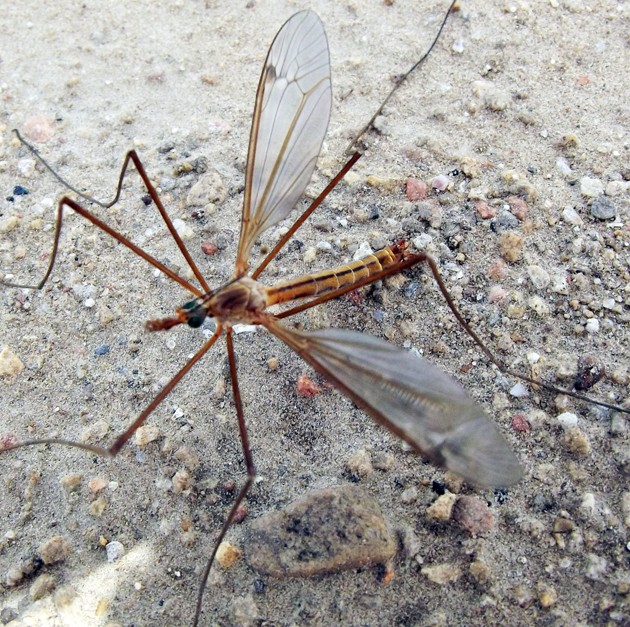 A crane fly was found sitting on a dirt trail near Churchwood Road in Tooele.

Possessing an average wingspan of approximately 2.5 inches with a varying body length of one to two inches, the crane fly is a large but fragile insect, having easily detachable legs and short lifespans as adults.

Crane flies are often mistaken for giant mosquitoes because of their body’s similar stick-like figures and rapid wing movement, which often results in them being killed or feared when they occasionally find their way indoors or near lights. However, crane flies are completely harmless. They cannot bite and do not have the visibly long proboscis like the mosquito.

Although incapable of stinging, the long ovipositor on a female crane fly is often mistaken for a stinger. An ovipositor is an egg-laying organ commonly possessed by female fish or insects. The female crane fly uses its ovipositors for depositing eggs into water or soil.

Crane flies can be seen as they are drawn to lights or sitting on walls. They inhabit areas with or without water. While the larvae and adults serve as an important food source for a variety of animals, the larvae are also beneficial for devouring decomposing plant matter. Depending on the species, some crane fly larvae tend to eat mosquito eggs, algae, fungi, or live plants. The adult’s diet, however, consists of nothing, as crane flies do not eat during their adult life, which lasts only 10 to 15 days.

After undergoing their pupa stage, crane flies immediately seek mates by locating one through flight or by walking. Once a female finishes copulating, she will find a location to oviposit her eggs. Depending on the species, crane flies most commonly place their eggs in moist or dry soils, or on the surface of water. Some species have been known to just simply drop their eggs at random during flight.