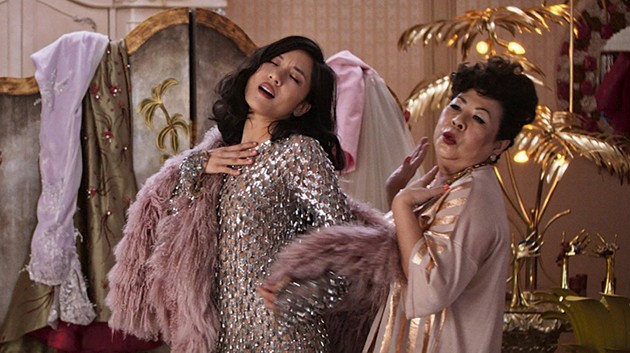 “Crazy Rich Asians” is a romantic comedy based on the best-selling novel by Kevin Kwan following a Chinese American woman who learns her boyfriend is from one of Singapore’s richest families. (Courtesy of Warner Bros. Pictures)

If you walk into “Crazy Rich Asians” thinking you’re going to see an in-depth examination about the lives of powerful Asians, you may be disappointed. The movie’s focus is more on the romance between two people of different classes and the family’s opinion of it. Though the movie doesn’t describe much about the wealthy family’s culture and lifestyle, it’s still a funny, light-hearted movie that entertains.

The story is about Rachel Chu (Constance Wu) who decides to go on a trip with her boyfriend, Nick Young (Henry Golding), to Singapore for the wedding of his best friend, Colin Khoo (Chris Pang), in which he is best man. The trip will give Rachel the opportunity to meet Nick’s family, of which she knows little. She is oblivious of their immense fortune until on the plane, when they fly first class, he reveals to her that his family consists of real estate developers.

Nick has not had much communication with his family for the last year, so when word gets back to them that he has a girlfriend, she becomes the talk of the family even before she arrives. There is prejudice toward her because of her being Asian-American, poor, and having the pick of the litter with Nick.

After they arrive, she meets with Colin and his fiancée Araminta (Sonoya Mizuno), her old college friend Goh Peik Lin (Awkwafina), and Nick’s mom Eleanor Sung-Young (Michelle Yeoh) in various circumstances. Rachel learns how to deal with the prejudice until Eleanor tells her directly of her dislike for her, and how unfit she is for her son. As conflict rises, Rachel doesn’t know if her love for Nick is going to survive his crazy rich family.

The movie is monumental for one reason: as you have already heard, the entire cast is Asian. Of course, foreign movies have had all Asian casts before, but surprisingly an American funded movie has always managed to squeeze a white person into the production of a movie about Asians (for example Matt Damon’s “The Great Wall”). I like seeing change come to movies, and I hope to see more films inspired by this change in the future.

The biggest praise I have for the movie, besides it being a pioneer film, is the chemistry between Rachel and Nick. They raised the bar for what a movie couple could be because of how realistic they seemed. The comedy was great as well. Nearly every joke landed and some of the performances (especially Awkwafina’s) were flat out hilarious. However, the movie has a retro-like style that might throw some people for a loop. I didn’t mind it, but I didn’t particularly love it either.

For me, the biggest flaw about “Crazy Rich Asians” is it seemed to hold back on displaying how much power the Young family actually possessed. The characters are supposed to be imposing but didn’t have much of an effect on me. I imagine a family that rich would be scarier than how they appeared. I would have also liked to see more about their culture and traditions. The story does skim over some ideas and beliefs at certain parts of the movie, but not enough to completely understand some of the characters’ motivations.

Despite these few flaws, I’m glad to have seen it. The grade may not be marvelous, because I do think better movies could still be made in this genre. Yet, I would recommend you see this film if you want a nice popcorn flick.