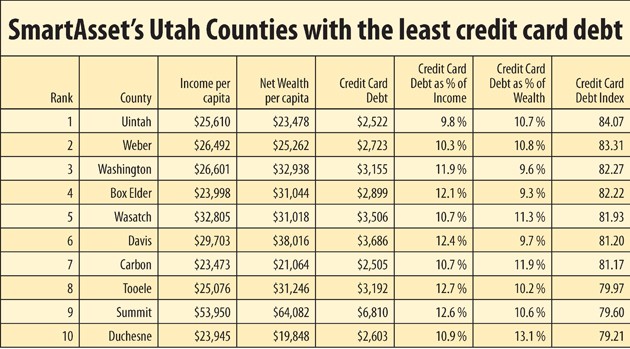 Tooele residents are ‘staying on top of their credit card bills’ ♦

An analysis completed by SmartAsset in December 2020, lists Tooele County as the 8th best county in the state “where residents are staying on top of their credit card bills,” according to SmartAsset.

To complete the study, SmartAsset calculated the ratio of credit card debt to per capita income for each county in the state.

“This number can serve as a benchmark to determine whether people will be able to pay off that debt,” said SmartAsset.

SmartAsset also calculated the ratio of credit card debt to net wealth per capita for each county. “This measure provides a broader picture of an area’s financial stability,” said the study.

The counties with the highest overall index value were the places with the least credit card debt.

“Paying off credit card debt isn’t just a smart financial move. Research shows that carrying debt can be bad for our physical and mental health,” advises SmartAsset on their website.

Paying off credit cards also allows people to focus on retirement and other financial goals, according to SmartAsset.