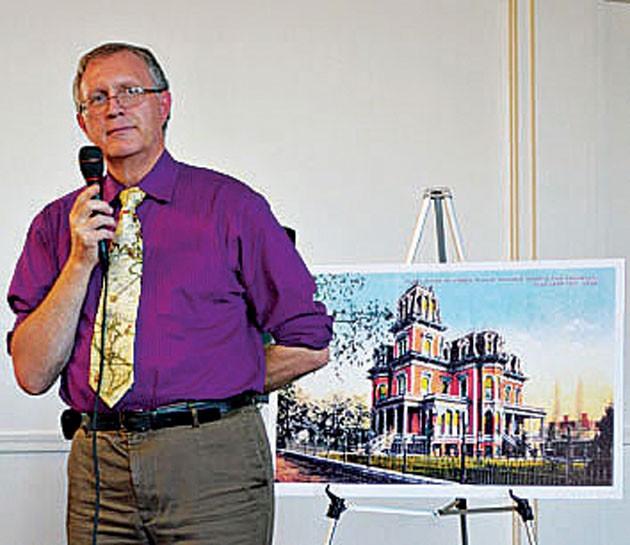 Local historian Mark Curtis speaks to local members of the Sons of Utah Pioneers about the “Gardo House.” The house was once a luxurious mansion built by Brigham Young for his wife Amelia. Curtis has spent countless hours researching this little known gem of pioneer history.

Editor’s note: This month, Joe Brandon wrote the Sons of the Utah Pioneers spotlight for our normal contributor, Darrell Smith.

Sons of Utah Pioneers Settlement Canyon Chapter hosted Mark Curtis, local historian, during the August dinner meeting. Mark, who has had a lifelong interest in historical architecture, presented a slide show on the Gardo House.

The Gardo House was a mansion built by Brigham Young, as a place where he could receive official callers and entertain dignitaries who traveled great distances to see him. Joseph Ridges, designer and builder of the original Salt Lake Tabernacle organ, and William Folsom, Brigham’s father-in-law, who had played a vital role in the design and construction of several temples, worked together to draw the plans and superintend the construction of the house, which was located across the street from the Lion House on the Southwest corner of South Temple and State.

Curtis’ slide show of original photographs revealed the finished home had four levels, including the basement, with a tower on the northwest corner. The foundation and basement were made of granite. The exterior walls were of 2/6 studs in-filled with adobe bricks, with lath and plaster on the inside and two layers of lath and stucco on the outside.

The interior woodwork, which included a spiral staircase, paneling and decorative trim, was carved in black walnut. Elegant furnishings, paintings by local artists, and mirrors imported from Europe graced all the rooms. The mansion was dedicated on Feb. 22, 1883.

The Gardo House was nicknamed “Amelia’s Palace” for Brigham’s wife Amelia Folsom Young, who was to be its hostess. But, with the death of Brigham Young Aug. 20, 1877, that never happened. He never lived to see the completed mansion.

In 1901, it was sold to Colonel Edwin F. Holmes and his wife, Susanna Bransford Emery Holmes who was known as the “Silver Queen.” When the Colonel bought the mansion, he brought 20 decorators from Chicago to fit it out. Twenty years later, in 1921, the Gordo House’s reign ended when it was torn down to build a bank.

Mark’s presentation was enjoyed by all. If you are interested in all things relating to Utah’s history, such as Mark’s great presentation, join us the first Thursday of every month at 6:30 p.m. for a pot-luck and presentations.

On Thursday, Sept. 7, we will meet at Barbara Barlow’s Speirs farm to listen to Walt Shubert’s presentation of Ophir and Mercur. You won’t want to miss this. In case of inclement weather, we will meet at the LDS meeting house on the corners of Pinehurst and Utah Avenues in Tooele.