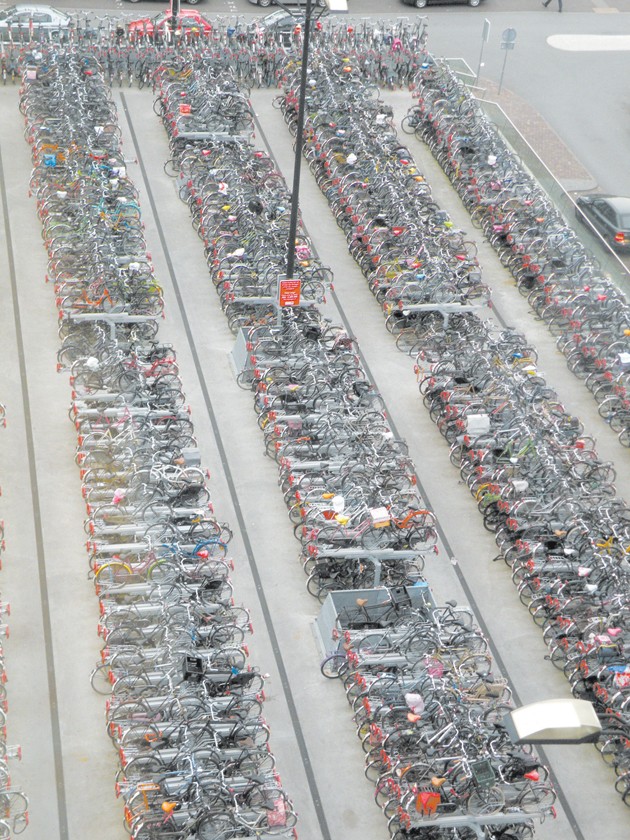 Thousands of commuters ride bicycles to catch a train to work or to town for other activities in the Netherlands. The bicycles are parked in layered parking areas.

June 11, 2013
Cycling provides a joyful way for that much needed exercise

Last spring, I went to the Netherlands where riding bicycles is a way of life. People on bicycles are everywhere: mixed with automobile traffic on city streets, thronging down bicycle lanes that line most roadways, or sailing along the edges of miles of blooming tulip fields.

Those bicycle lanes we pay little attention to along roadways here in Utah are serious business in the Netherlands. Those in cars know better than to drive there and walkers must never mistake them for a safe walking zone. It only took a couple of near-misses to teach me to look both ways before stepping into them. Dumb American.

Mass transit is the way to get around, but bicycles take commuters to the terminals. It is safe to say that tens of thousands of bikes are parked in bicycle parking lots around the train stations there all the time. Platforms are packed above each equally thickly packed row on the ground. Just reach up, lift down your bike and take off. In some busy stations there are double-decker garages with these double-layered bike rows.

We were traveling with a couple of guys who once biked their way through missions to the Netherlands in years past. They were looking forward reminiscently to meandering along roads among tulip fields. The dream was contagious, and my husband and I picked up on the imagery.

Conveniently discarding memories of my mother picking gravel from my knees after various bicycling accidents, I entertained happy thoughts of the wind blowing through my hair as I sailed along in the sunshiny days of youthful glory. The sensation goaded me on.

In anticipation, I acquired a bicycle to get into shape before leaving. I was ready to roar.

There were only two problems. No. 1 I am no longer youthful. No. 2 It rained.

I might have overcome problem one by lowering my expectations of speed and endurance, but problem two was considerably harder.

The temperature in the Netherlands of April 2012 hovered between 30 and 45 degrees, and rain drizzled incessantly or descended in sheets when the storms really broke loose. Sometimes the wind kicked up and it rained horizontally. In shape or out, there was no way I was riding a bicycle through it.

Not cycling was a minor sacrifice. The spring bulbs bobbed cheerfully through the storms. We spent the entire trip in a euphoric dream. Cold? Who cares? Wet? I won’t melt. But I enjoyed the journey inside vehicles or under umbrellas.

Each morning, we bundled into heavy coats, hoods, hats and gloves as though facing an impending blizzard. No one on the trip ever found out what the others wore under those winter coats. No one cared. There were glorious sights to see.

But the bicycling frenzy got me thinking. So many Nederlanders ride bicycles and those who do are undoubtedly more fit than those who don’t.

Cycling is a great activity for many reasons. As a form of transportation it cuts gasoline consumption and pollution.

If you are big into mountain biking, you may pay extra for a bike, but it is still a relatively inexpensive way to get around. You save on fuel, maintenance expenses and insurance.

The health benefits are enough reason to pursue it as a sport. Cycling works most of the body. You have to balance yourself, pedal the bike and guide it. It is good for posture, back, leg and arm muscles. It is good for the psyche, too.  You may not have fields of tulips to look at, but there is that sensation of the breeze in your face, and if you are riding for recreation, an opportunity to clear your mind. Any form of continuous exercise increases a sense of well-being. You aren’t moving so fast, and there is no glass in the way. You see things you’d never notice otherwise. Yes you wear a helmet and make sure you are aware of traffic around you for safety, but a bike ride through the countryside is a place to relax.

Don’t forget the workout for heart and lungs. The heart rate speeds up and breathing becomes more rapid. Stamina increases.

Besides strengthening heart and lungs, it tones muscles and burns calories. These lead to weight loss and flab reduction. Go it at your own pace. Go a long way or stop soon. Either way is legitimate. Cycling doesn’t have to be a race, although it can. It can also be a group activity that can include grandparents, parents and children of all ages. It’s great fun and great exercise. Everyone benefits.

Bicycles come in an array of designs and sizes with different tire sizes and brake systems. They come in various styles for various purposes and comfort levels.

You might want to revisit your bicycling youth at any age and enjoy the benefits of the sport.