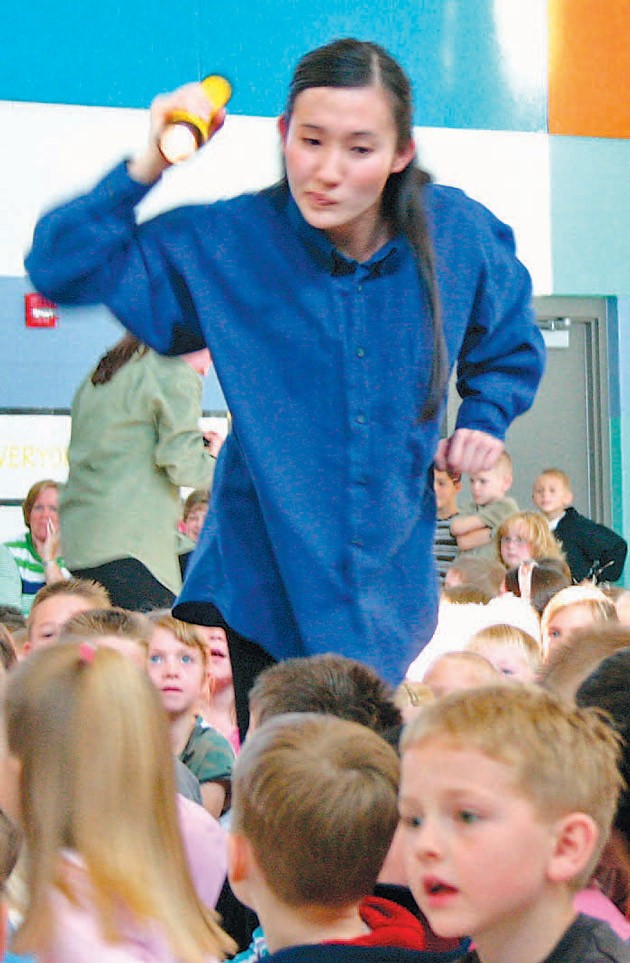 Kimi Matsamura was one of three members of Kinnect who performed at Willow Elementary last week to kick off the Artists in Residence program. photography/Alleen Lang

Jared DeLaney demonstrates what he has learned. photography/Alleen Lang

“B” is for body, also beautiful, brains and bones. “B” was also the beginning of the ABCs of dance as performed by Kinnect in a kick-off assembly at Willow Elementary School.

As the artist in residence, Marilyn Berrett, dance educator and performing artist at Brigham Young University, will teach core curriculum subjects to kindergarten students through the art of dance, Beazer said.

Berrett introduced the entire Willow Elementary student body to dance through the performances of Kinnect, a modern dance company formed to teach dance through outreach programs. After the assembly, members of the company spent the day teaching dance basics to each class at the school.

In a multi-media presentation using art, music and movement, Kinnect taught the fascinated young students the elements of dance.

As the first element, “B” stands for body.

The letter “E” stands for energy, or the ‘go power” of the dance.

Third was “S” for space — as in the level, size, focus and direction of the body. Dancers showed how they could use their bodies to make shapes in space. Pulling children from the audience they encouraged the youngsters to make shapes and mimic the arm and leg movements of the dancers.

The letter “T” — or time — made up the last letter of dancing ABCs. Children were introduced to this element with rhythmic clapping, keeping time to the music. Berrett show the young audience a painting of jazz musicians and told them “the sound of that painting came right into our eyes.” Kinnect then performed a jazzy number demonstrating rhythm and timing.

Together the letters spelled the word “BEST.” Berrett told the assembled youngsters dance is best because “it has been on earth forever.”

“People dance because it connects them to each other,” she said.

The dance group Kinnect has been in existence for four years, but Berrett has been teaching dance to elementary students and their teachers for more than 25 years.

Berrett is a certified elementary school teacher who took a sabbatical from Brigham Young University to work as classroom teacher in Jordan School District for two years.

“Children are kinesthetic,” she said. “They think better if they can move.”

The initial grant was written by a Willow Elementary kindergarten teacher, so the school decided to focus on the youngest students for the artist in residence program, Beazer said. When you consider the attention span of a kindergarten student is about 5 to 6 minutes it really helps to get them to move around, she added.

Jaycee Harris, moves her arm to the music. photography/Alleen Lang

Bennett has been instructed to focus on nursery rhymes and dance as part of the kindergarten core. Dance will be used to reinforce lessons on letters and language, she said.

“Dance is mind/body control.” Watching as kindergarten student “freeze” in a dance shape, she said this kind of movement requires a lot of concentration.

In addition to teaching children, she will also instruct the faculty through an in-service program.

“I think it will be nice to see the teachers be able to learn something they will be able to use in their classroom without being stressed out about it,” Beazer said. She also hopes to “see the light bulb” go on in children who might not otherwise understand what is being taught. As a final goal, she said, with “all those little dancers maybe she will be able to motivate someone to become a (professional) dancer.”

Kimi Matsamura once again shows her finesse as a dancer. photography/Allen Lang

But the little bodies of Connie Killpack’s kindergarten class whirl and jump; move and freeze as directed by music and the voice of their young instructor. It’s clear they are not worried about learning their ABCs, unless you count the ABCs of dance.

The Artist in Residence program is funded in part by a grant from the Arts in Education Program of the Utah Arts Council. The UAC is a state agency funded by the Utah State Legislator and the National Endowment of the Arts.