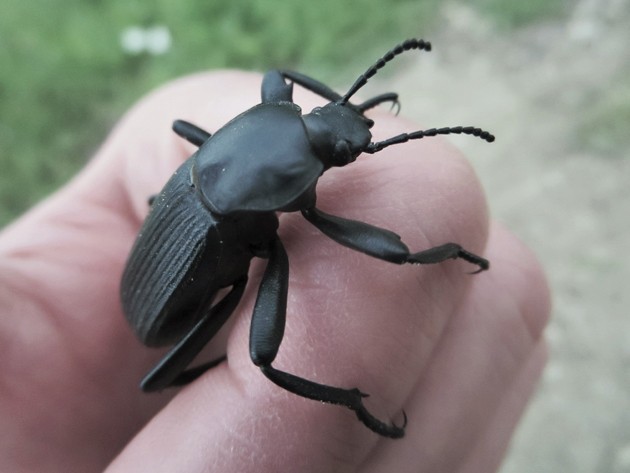 A species of darkling beetle was found on a trail around Smelter Road. It was neither harmed nor injured.

December 10, 2015
Darkling beetles are helpful to the environment, but can also be pests

The darkling beetle’s family name is derived from the Latin word Tenebrio, meaning “seeker of dark places.” Their family, Tenebrionidae, is a very large family and because there are over 20,000 different species worldwide, species of darkling beetles can differ in various ways.

Despite the numerous types of darkling beetles, many for the most part, are similar when comparing diet, behavior and life cycles. As adults, their size can range from 1-1.5 inches in length, while their preferred habitat remains sheltering themselves underneath rocks, leaves, wood and other natural debris.

As far as appearance, the most common colorations of the darkling beetle are black or brown, along with a smooth exoskeleton. Known mostly as scavengers, darkling beetles are considered a pest because they sometimes devour their way into stored goods, such as flour, grains, mill, cereal and even pet food. Both adults and larvae are known to do this if the opportunity occurs. However, adults are also known for being a tremendous help to the environment by eating away many sources of decomposing matter. Some of which include dead plants, rotting wood, fungi and sometimes dead animals or dung.

Their lifecycle is a complete metamorphosis, undergoing the four stages of egg, larvae, pupae then adulthood. When a female darkling beetle has mated, within a few days she lays hundreds of eggs in the soil, which will hatch in approximately 1-4 weeks.

Once hatched, the larvae spend 8-10 weeks feeding and scavenging, preparing themselves for their pupae stage. Though they look like worms, they possess six small legs intended for wandering and burrowing in soil. Hence their Latin name, they prefer warm but dark and damp places and will seek food in those areas. They will feed on both living and decaying vegetation, but like the adult, larvae will sometimes find its way into stored goods to devour what may be available. Darkling beetle larvae are also commonly known as “mealworms” from which humans sell to feed various domestic animals, including fish, birds, and reptiles. Mealworms are also frequently used as bait by fishermen.

After undergoing their larvae stage, darkling beetles prepare for their final growth by burrowing in the soil. While in their pupae stage, which can last from 1-3 weeks, darkling beetles do not eat, as they possess neither a mouth nor an anus at the time. The legs and current wing-nubs they have are also nonfunctioning; the only movement pupae are capable of is wiggling. Once evolved into adults, they emerge from the ground and will mate within 1-2 weeks, repeating the lifecycle.

It is because of the darkling beetle’s abundance worldwide, reproducing moderately fast and in great numbers, they are an important food source to many animals, both wild and domestic. The adult and larvae are mostly nocturnal, but can be seen wandering during the day. Although the adults do have wings, they are incapable of flying for they are inseparably sealed together over their bodies. Within Tooele County, many darkling beetles can be found marching throughout the shrub-lands, along roads, pavements or other areas. Many large black ones have been notably spotted around Smelter Road, above Churchwood Drive and around Settlement Canyon Reservoir. They do not bite and can be a neat creature to hold if held gently.