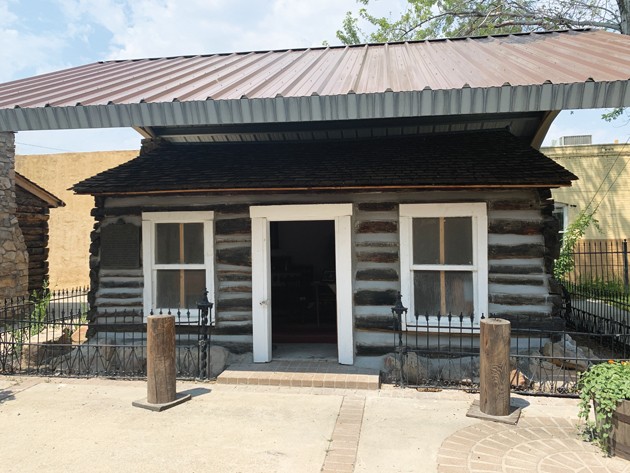 A historic cabin outside the Daughters of Utah Pioneers Museum on Vine Street in Tooele City. The Tooele DUP has restored the caulking on the cabin and has other restoration work planned for the cabin.

Caulking on the outside of a 168-year-old cabin located at the Daughters of Utah Pioneers Museum on Vine Street has been restored.

The historic cabin, which has housed many different individuals and various shops, sits on the west side of the museum property for visitors to walk through.

The cabin was built in 1853 by Zachariah Edwards with pine logs that probably came out of Settlement Canyon, according to Dorothy Bottema, museum curator.

Edwards never finished it and later sold it to the Gowans family whose pictures are on the wall of the cabin.

The cabin was passed down through the generations and is often referred to by Bottema as the “honeymoon cabin” because many babies were born there.

“It seemed as if you got married in the family, then this was given to you to be your first apartment,” she said.

The cabin was originally located on Main Street and what used to be called Buffalo Boulevard, across from Tate Mortuary.

In 1972, it was brought to the DUP museum, which used to be a courthouse, for preservation.

Located within the cabin are pictures of families who lived in the cabin, an original table and furniture made by the original owner, a spinning wheel, grinding stone, and a yarn weasel.

Along with the extensive family history of the cabin, it has also been used as a private library, dressmaking shop, shoe store, and has even housed over 500 turkeys, according to Bottema.

“I’ve always said that this cabin is very little, but if the walls and the logs could talk, what stories they could tell,” Bottema said.

Last year, employees were worried that the caulking on the outside of the cabin was falling out.

They were able to secure a grant from Tooele County through the Tourism Tax Advisory Board, according to Judy Schnider, president of the museum.

“We wanted to preserve it, so that’s why we recaulked it,” said Schnider. “Thanks to the donation from the Tooele County Tourism Commission, we were able to get it done. The Gowan’s family and the Daughters of the Utah Pioneers camps helped pay for this.”

Work on the caulking began in October and finished at the end of October 2020.

“We wanted it to dry before the snow got to it,” Schnider explained.

The new caulking should hold up for at least a while, according to Schnider.

Now, the cabin needs more work done. Because of the caulking work, some of the plaster inside of the cabin’s walls has fallen off.

“We are going to need to replaster it again. The caulking work caused the plaster to crack and you can actually see where it has come off of the walls,” Schnider explained. “We had piles of it and we had to clean it up.”

Whomever comes to fix the plaster will literally weave the old plaster that’s left and new plaster together, according to Schnider.

“This will make the old plaster stay,” she explained. “After the plaster is done, we will come in and whitewash it again.”

This will cost the museum $2,500 and the money will come from the Tooele County’s tourism tax fund.

The cabin also needs to be stained again.

“We are planning on doing that this year,” said Schnider.

The museum is free to visit but donations are accepted, according to Schnider.

“This cabin is one of the visitor’s favorite things,” said the great granddaughter of the original owner of the cabin, Helen Pierson “My grandfather and his sister, and aunt and uncle were born in this cabin.”