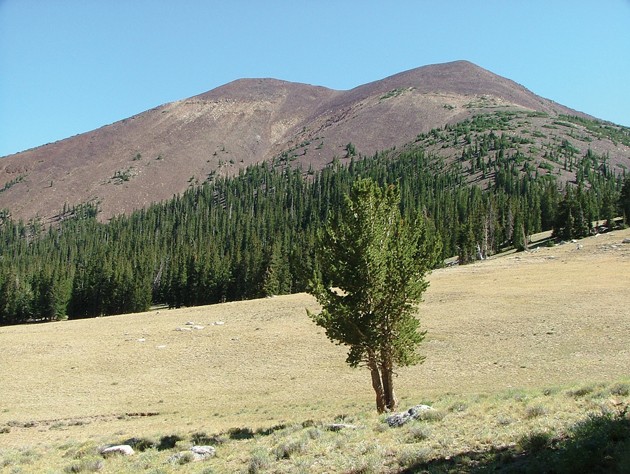 September 7, 2017
Deep Creek Mountains are like an island in a desert ocean

Editor’s note: After a three-week break, Jessop takes us back to his multi-part series on exploring the Pony Express Trail through Tooele County. The previous installment, published on Aug. 10, entailed Pony Express Station Manager Peter Neas.

“Thousands of tired, nerve shaken, over civilized people are beginning to find out that going to the mountain is going home; that wilderness is a necessity.”

The awe-inspiring sight of the Deep Creek Mountains is before you while heading west of Willow Springs Station on the Pony Express Trail. This group of high peaks is unlike anything else encountered on the trail through Tooele County’s West Desert.

According to an article by Mike Medberry of the Southern Utah Wilderness Alliance, the Deep Creeks have been occupied by Archaic, Sevier and Pauite-Shoshone peoples for over 8,500 years. The mountains’ rich abundance of water, pine nuts, game and shelter made them an anchor to nomadic peoples for centuries.

One of the most striking features of the range are the two giant buttresses that tower to a height of 8,676 feet and 8,937 feet, respectively, and guard the entrance to Basin Canyon west of Callao. They stand as a protective portal into Deep Creek’s other worldly environment of pinion, aspen, grasses, pine and cool streams.

I sometimes wonder if this is the canyon that old Pete Neas, Pony Express Trail station manager at Willow Springs, warned that the Indians would emerge from at nightfall and attack the station as described in the previous article as told by Nicholas Wilson. I imagine that early travelers along the Pony Express and Overland Stage route, stood amazed at the sight of these rocky guardians of the Deep Creek high country — just like people do today when they pass through Callao.

Some of Deep Creek’s peaks have colorful names such as Red Mountain, a peak that was originally named Red Chief Mountain on 1880s surveyor’s charts. But “Chief” was dropped in later versions of the map.

Red Mountain is so named because of its red talus rock, and is located to the south of Ibapah Peak along the crest of the range and makes up the southern wall of Granite Creek Canyon. Red Mountain is a long, large peak that reminds one of Mt. Timpanogos in the Wasatch Range because it is a long, high ridge with an 11,585 foot-high north summit and an 11,441 foot-high south summit (same elevation as North Timpanogos). There are also three separate sub summits over 11,000 feet high along the ridge between these two points.

Reilly Canyon and Reilly Peak are named after an Overland Stage employee who was killed by Indians in 1863 at Canyon Station. Blood Mountain, which looms over “Overland Canyon,” likely derives its name from the same incident. Ibapah, the tallest peak in the range, is named after an Indian word that means “Clay colored water” or “Deep Down water,” depending on the translation, both of which refer to the “Deep Creek” that runs south to north in the fertile valley to the west of the range.

The east face of the range in the vicinity of Ibapah Peak closely resembles the Little Cottonwood canyon area of the Wasatch Range. There is an abundance of exposed white granite in the form of towers, domes, and jumbled gates at the mouths of several canyons, such as Indian Farm, Red Cedar and Granite Creek. In fact, when Jedidiah Smith stumbled onto this area in 1827, he rejoiced because he thought he had reached the Wasatch Range and was then dismayed to realize he still had to cross the West Desert.

After you drive through tiny Callao, you will come to a “T” intersection. If you turn left, you will head toward the desert outposts of Partoun, Trout Creek and Gandy — eventually merging onto US 6/50 near the Utah/Nevada border. If you turn right, you will continue on the Pony Express Trail auto tour route toward Deep Creek/Overland Canyon, which was probably the most dangerous and deadly part of the Overland Stage and Pony Express Trail. If you have the time, turn left and take a drive along the front of the Deep Creek Mountains and admire the stunning, rugged mouths of Toms, Indian Farm, Red Cedar and Granite canyons.

As you head south along this road, take a moment or two to stop, get out of your vehicle, and observe the towering, pine- covered peaks of the Deep Creek Range, whose summits rise well above the tree line. The view of the skyline from south to north is the volcanic-looking cone of 11,598 foot-high Callao Peak (author’s name), which is just east of Haystack Peak, and 11,987 foot-high Ibapah Azimuth, which is often mistaken for Haystack Peak when viewed from the north. These three summits make up an impressive triumvirate of peaks when viewed from the east in the vicinity of Callao.

Also, note the clearly defined tree line on these peaks that delineates different climate zones. The views transition upward from barren sagebrush and cheatgrass plain to rocky pinion juniper woodlands to mixed Douglas fir, white fir and aspen to Engelmann spruce, limber pine, subalpine fir and Bristlecone Pine, and then to tundra in a few of the highest areas.

In fact, according to a Bureau of Land Management report from 1986, the bristlecone pine found on high-elevation limestone soils in the Deep Creek Mountains approach the size and appearance of the bristlecone pine in California’s Methuselah Grove, home of the world’s oldest living trees. There are also significant stands of young bristlecone pine that provide the range with a self-perpetuating community of these rare and ancient life forms.

Some of the deeper canyons below the highest peaks contain tiny streams. In some of these streams you can see Bonneville Cutthroat Trout sporting in the pools. According to an article in the “Great Basin Naturalist” magazine, these fish are the only trout native to the Great Basin in Utah. Thousands of years ago they were abundant in Lake Bonneville.

Like an island in a desert ocean, the Deep Creek’s forested canyons and glacier-carved cirques, provide habitat for mule deer, elk, bobcat, cougar, bighorn sheep, fox, badger, porcupine, coyote, rabbits, raptors, snakes and many other smaller creatures. Along the benches of the mountains just outside the canyons, pronghorn antelope and wild horses are common sights.

This mountain oasis is completely unexpected after the 100-plus miles of baked desert that you will have traveled to get here coming from the east. Undoubtedly, the Pony Express rider or Overland Stage passenger marveled at the sight of these lofty peaks, the relief of which from valley floor to the summit of Ibapah Peak is over 7,000 feet. According to old journals and accounts, these peaks were often snowcapped throughout most of the summer back in the 1860s.

In next week’s article, before we leave the Deep Creek Mountains behind and enter Overland Canyon, I will describe a reasonable approach and route for the ascent of Ibapah Peak. In the meantime, if you venture out into “Deep Creek Country,” make sure that you are thoroughly prepared with plenty of water, food, full tank of gas, spare tire, etc. There is no cell phone service and emergency services are hours away. Take necessary precautions and then if your schedule will allow, go admire this wilderness far away from urban civilization.