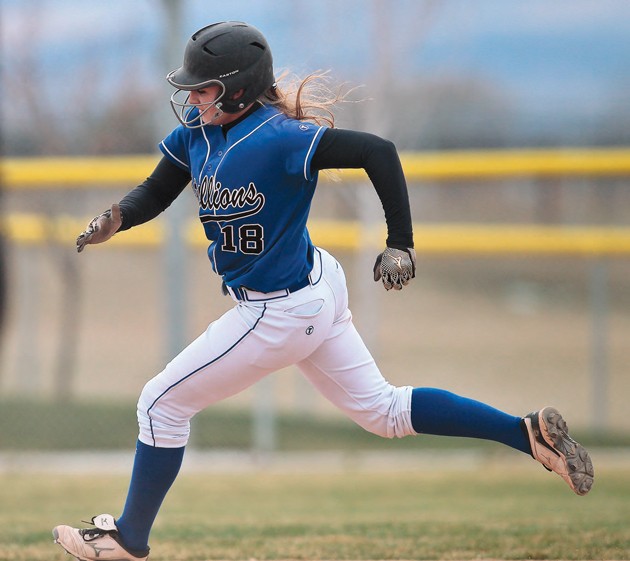 Stansbury junior Katelyn Robinson runs the bases Friday against Bear River. Robinson has 10 extra-base hits this season and is 4-1 as a pitcher.

Defending 3A state champion Bear River pulled away from Stansbury with three runs in the final two innings to beat the Stallions 7-3 on Friday afternoon in Stansbury Park. It was the first loss for the Stallions this season.

With the game tied at 1-1 after four innings, the Bears scored three runs in the top of the fifth to jump out to a 4-1 lead. Stansbury charged back to narrow the gap to 4-3 with two runs in the bottom of the fifth. With one out and Beth Chipman at first base, Katelyn Robinson pounded a triple through the right-center gap to score Chipman. Robinson soon scored on an error and the Stallions trailed 4-3 after five complete innings.

Errors, wild pitches and two bunt singles hurt the Stallions in the top of the sixth and the Bears were able to score twice to push their lead to 6-3.

Bear River pitcher Jordan Theurer, who is 18-4 in the circle counting this season and last season, was able to get two quick strikeouts against the Stallions in bottom of the sixth. Jocelyn Kaufman blooped a single, and then Elise Sutherland smacked a deep fly ball to left but right field but Bear River made the play for the third out.

The Stallions were able to knock six hits against the Bear River ace, but they didn’t help their cause on defense with five errors for the game.

The Bears added an insurance in the seventh when Erin Fox led off with a triple to the right corner and later scored on a RBI bunt single. Stanbury’s Janessa Bassett singled up the middle to start the seventh and stole second base, but was stranded there.

Stansbury tied the game at 1-1 in the bottom of the third when Bassett pounded the ball right back at the pitcher which ricocheted off Theurer. Bassett stole second and third and then scored on a bloop single by Chipman.

Robinson went the distance in the circle for Stansbury and gave up eight hits.

The Stallions play at Alta on Thursday, host Ogden on Friday and play four games on Saturday at the Payson tournament.