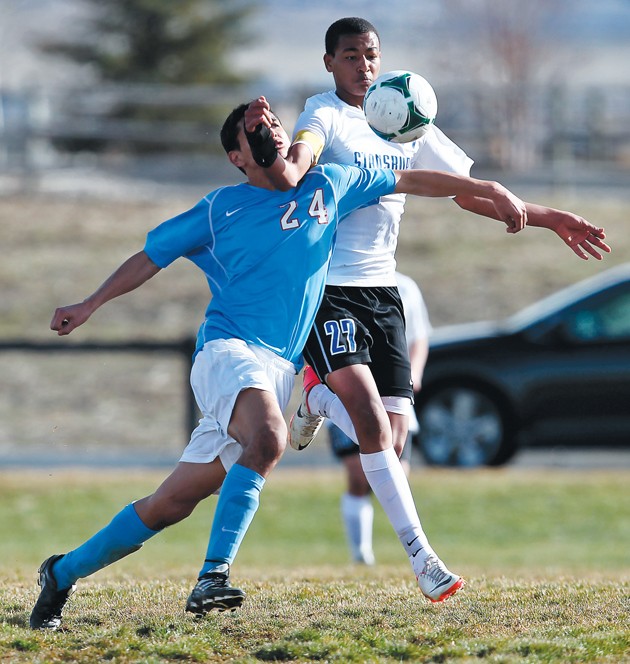 Stansbury High School’s Jara Eshete fights for the ball Tuesday against Ben Lomond. The Stallions lost 4-0 to the Scots in the region opener.

Ben Lomond scored two early goals in the first half and another two later on for a 4-0 shutout victory over Stansbury in the first region game of the season.

BLHS player Victor Galindo scored two goals on the day, including the game’s first goal that helped the Scots cruise to the win.

“We didn’t come to play,” Stansbury coach Brandon Anderson said. “I won’t even sugar-coat it. The Clearfield game and this game were completely night-and-day different. We had no energy and really no enthusiasm. We just played flat.”

Ben Lomond’s offensive players kept the ball in the Stallions’ zone for most of the game, and the forwards had several plays where they got by defenders for easy shots. The Scots’ fourth goal came on a deflection that turned into an easy put-back for a score.

“We had some miscues on defense,” Anderson said. “We had to mix it up a little bit. We moved some players around that just weren’t having their game, and then after we did that the bleeding stopped. Until we made that move they put three goals in. You win games by good defense. Anybody will enjoy a 0-0 tie, and it starts from your defense. Today, our defense just didn’t play as well as they normally do.”

Stansbury had less than a handful of scoring opportunities, and just two of those opportunities looked as though it may go into the back of the net. Jara Eshete fought through the Ben Lomond defenders with one player hugging him tight. Eshete launched a kick that slightly missed over the top post of the net.

“You’re going to see a little different movement in Friday’s match,” Anderson said. “We noticed that a couple of our players just weren’t transitioning well. We were waiting to react instead of reacting. We weren’t anticipating the ball movement. You have to anticipate the ball being played, and we were waiting for it to happen instead of anticipating and making sure we were there when it was there. That won’t be happening on Friday.”

Anderson said he expects his players will get more shots on goal during Friday’s contest against Bear River. He said normally his offensive players are much more aggressive, and he expects that trait to return.

The Stallions’ game against Bear River starts at 3:30 p.m. on Friday. The Bears won their first region game of the season — a 3-1 road win against the Tooele Buffaloes. Before that the Bears lost to Sky View 7-1 on March 5. In two region meetings last season, the Bears defeated the Stallions in both games. They won 3-1 on March 20, 2012, and then again 3-2 on April 13, 2012.

Following that Friday game, the Stallions then battle rival Tooele on Tuesday at Tooele High School. That Tuesday game is set for 3:30 p.m. as well.