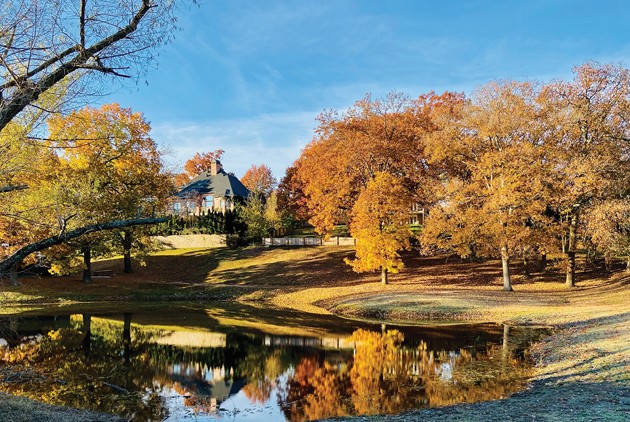 The photo was of a beautiful scene. It was also a description of regret and promise.

Regret because it was a solid reminder that summer was over. The season had turned to fall. Yellow, gold, and green foliage burst beneath an azure blue sky with a double dose of color. Double because the colors also reflected off of the water which lapped near the roots of the showy trees. Some leaves were drifting from lofty heights toward the ground and water below as if to speak as a hint. While the season was still solidly in the middle of fall, winter was surely coming soon and there was a tinge of regret for things undone during the summer.

The enjoyment of summer’s pleasure was at an end to be sure. Outdoor swimming pools were now closed. Romantic sidewalk cafes were no longer offered as a rendezvous place with loved ones. Picnics spread under tall trees on the comfort of green grass are now at pause. Of course, you and I enjoyed these activities, but never enough. Hence, inconsolability. And, the bright, colorful leaves floating on the crisp air were also speaking of promise.

Holly Mabery, who was speaking to me just yesterday of eating the frogs of life first, also spoke of such promise as my mind was floating between the photo’s images of fall foliage and our conversation about how to change one’s relationship to gravity. “We don’t rise to the level of our goals, but fall to the level of our habits,” she said.

Habits, like the changing seasons most often continue with hardly a thought. Still, there are some common reminders to tell us that one isn’t necessarily bound to them as if by gravitational force. New Year’s resolutions are one seemingly universal example. Of such Holly paused in her speaking, just before she asked me an important question.

“Why wait for a specific moment to make a change? You have the power to make the change in this moment.”

We are what we repeatedly do. Our lives are but a collection of our own repetitively. So, how do we live a life filled with less regret? How do you and I exit the gravitational pull of rote, reactionary living? We simply choose to defy gravity.

Defying gravity could also be characterized as living life with our desired ending in mind. And, just like there are seasonal stages, there are distinct stages in defying gravity:

First, master the art of caring for people. Putting people first is the greatest attribute of leadership. This is demonstrated by showing others that you want them to succeed as much as you want to succeed yourself.

Second, mentor others, wherever you are. Actively reach out to the people you live and work with. Make a point of passing what you’ve learned personally and professionally on to them.

Third, make a difference by creating a thoughtful legacy plan. Ask yourself, “How do I want to be remembered?” Then, go out every day and create new habits, habits that will accumulate to create the person you’ve dreamt of becoming.

The dreamy photo I received electronically was of a beautiful fall scene; one to be remembered for sure. It was also a vision of regret and promise.

Regret because it was a solid reminder that summer was over. The season had turned to fall. Yellow, gold, and green foliage burst beneath an azure blue sky. Gravity was causing some leaves to drift from lofty heights toward the ground and water below. Winter was surely coming soon and there was a tinge of regret for things undone during the summer. Just like there are seasonal stages, there are distinct stages in defying gravity.

Lynn Butterfield lives in Erda and is a managing broker for a real estate company.