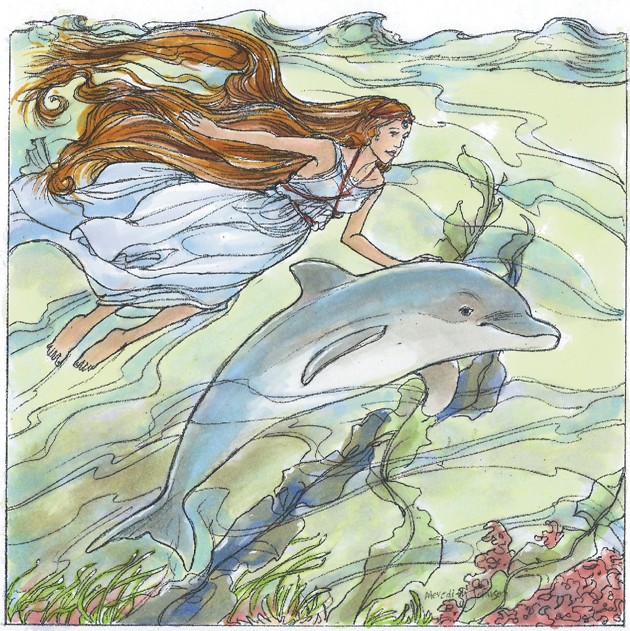 Long ago, Cronus ruled the world, but his sons Zeus, Hades and Poseidon defeated their father in war, and they took over the world. The brothers decided to divide the world so that each of them would rule one realm. Hades took the Underworld, Zeus took the Sky, and Poseidon inherited the sea.

Poseidon loved everything about the sea. He built himself a magnificent palace of shells, silver and jewels. Everything was perfect, but after a while the enormous palace left Poseidon lonely. He decided he must find a bride, and so he set out in search of the woman of his dreams.

As he traveled the seas, he came upon the nymphs who danced with liquid feet. One of the nymphs, Amphitrite, was a granddaughter of the Greek Titan of the seas, Oceanus. She was the daughter of the gentle sea god Nereus. She was a beautiful and proud woman, and she caught Poseidon’s eye. He saw in her the qualities of a queen and professed his love and desire to make her his wife.

But Amphitrite loved her independence. Despite the god’s importance and his riches, she did not wish to marry him, and so she ran away to the farthest edge of the sea, where she hid among her fellow nymphs and other sea creatures.

But Poseidon was in love, and he was determined, and he decided he would send a messenger to capture her and bring her to the sea palace. Surely he could win her love. Poseidon chose Delphinus, king of the dolphins, to find Amphitrite and to win her heart for the god.

Delphinus naturally obeyed, and so he set off on the long, difficult journey to find his master’s love. It took him many weeks, but at long last he found her. First, he swam close and sang his sweetest songs.

Amphitrite peered out from behind a wall of seaweed to listen more closely to the beautiful song. Delphinus swam closer still, and he slipped slowly past her, offering a gentle touch.

Amphitrite was touched by the dolphin’s gentle nature, and moved closer to listen.

“Please, dear nymph,” the dolphin pleaded, “Poseidon loves you. Although he can be a volatile god, if you will marry him, you will help the world. Think how your strength and beauty and steady nature will balance Poseidon’s nature, and tranquility will return to the world of the water. Imagine a sea where no one suffers, a sea where all is calm, peaceful and sweet. If you will be the goddess of the sea, everything will be good. I promise you joy.”

Amphitrite was deeply touched by the stories the dolphin told her, and so she surrendered. “I will go to the palace with you, and I will marry Poseidon,” she said. Together they traveled back to give Poseidon the wonderful news.

And so Poseidon married his bride, and they were happy together. Indeed, they had two daughters, the nymphs known as Rhode and Benthesicyme, and one son, the merman Triton, who had the upper body of a human being and the tail of a fish.

And as for Delphinus, Poseidon was so grateful to him, he placed the dolphin’s image in the sky to live among the stars.

Others tell a different story of the constellation Delphinus. People say it was the dolphin that saved the life of the poet and musician Arion, the finest player of the lyre who ever lived. Arion was at sea when one night he was walking the deck of a ship, playing his lyre, and his sailors surrounded him and drew their swords. They planned to kill him. But Arion began to sing, and as he did, a school of dolphins suddenly appeared and swam alongside the ship to listen to the poet’s song.

When Arion saw them, he said a silent prayer and leaped from the ship, praying to survive. The dolphins surrounded him and let him climb upon their backs, and they carried him all the way to Greece. In gratitude, the dolphin was placed among the constellations.

Whatever the true story, to this day the dolphin lives in the northern sky.