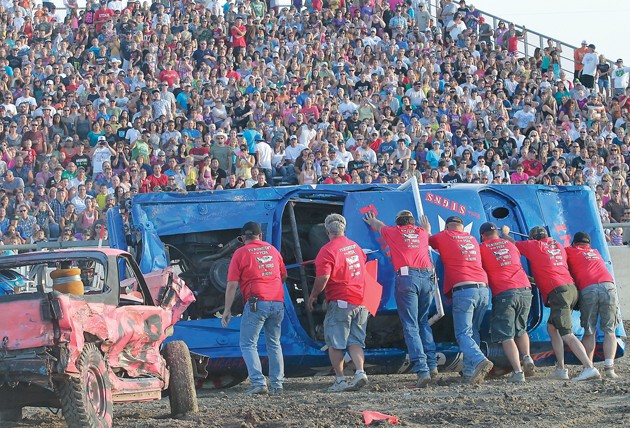 Demolition Derby volunteers push an overturned car on Aug. 4, 2012. Although originally reported to be official, the decision to keep the derby is still undecided.

The decision to continue with a demolition derby despite the cancellation of the Tooele County Fair evidently is not a done deal.

Last week’s announcement that Tooele County Search and Rescue will sponsor and conduct the popular event was premature. TCSR leaders are still meeting with county commissioners in an attempt to reach an agreement that will allow the derby to continue.

Until then, TCSR’s membership has not committed to hold the 2013 derby.

Evans is waiting for the commissioners to determine the rental fee and insurance costs for the arena at Deseret Peak Complex. After those figures are determined, TCSR members will decide whether or not to run the annual event.

At the crux of the decision is TCSR faces organizing and holding the demolition derby without financial support from the county. Instead, the commissioners want TCSR to pay the county for use of the arena.

“Personally, I want to do everything possible to see the demolition derby continue,” said Evans. “It is a tradition in the community.”

He is hopeful that a decision can be made by the end of the month.

Last month, in the aftermath of restructuring the Tooele County Parks and Recreation Department, and temporary closure of Deseret Peak Complex, the fair board decided to cancel the 2013 fair. That cancellation has left the fate of the demolition derby undetermined.