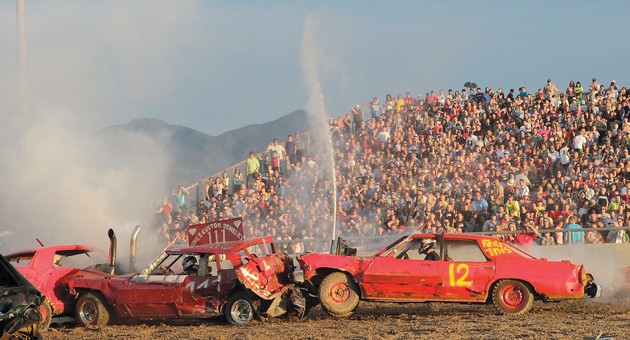 Steve Gunn’s radiator hose sprays into the air on Aug. 4, 2012 at the Tooele County Fair Demolition Derby. Despite the fair’s cancelation, the demolition derby will continue as originally planned.

While the Tooele County Fair is canceled for 2013, the demolition derby, traditionally part of the county fair weekend, will continue.

“Tooele County Search and Rescue will take over the demolition derby,” said Scott Evans, TCSR commander. “The derby is a tradition and if we don’t hold it this year, we may lose people that we will never get back.”

The demolition derby usually draws a crowd of around 10,000 people, many of whom come from outside the county, said Evans.

Last week, in the wake of last month’s dismantling of the Tooele County Parks and Recreation Department, and temporary closure of Deseret Peak Complex, the Tooele County fair board decided to cancel the 2013 fair.

TCSR’s experience with demolition derbies goes back almost 25 years when it started its own demolition derby, typically held in June, as a fundraiser.

In 2008, county officials approached TCSR members and asked them to take over the organization and operation of the county fair’s demolition derby held during the first weekend of August.

“In the past the county demolition derby was the county’s event. They just paid us for the manpower to put it on,” said Evans. “The county paid for all the other expenses.”

The new arrangement with the county will involve TCSR renting the arena at Deseret Peak and assuming all costs and liability for the derby, said Evans.

“We have met with the county commissioners and they are looking into the cost of insurance,” he said. “Once they know how much the insurance will cost, they can set a rental price that will allow them to recoup any expenses they might incur.”

Evans estimated it costs $35,000 to organize and conduct the demolition derby.

“Tooele County Search and Rescue will assume all the risk and do everything we can to make this year’s demolition derby successful,” he added.