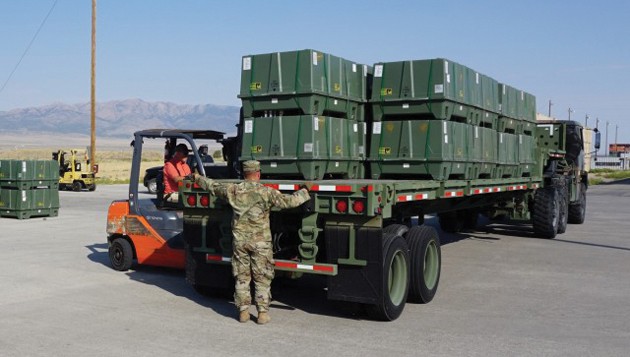 Tooele Army Depot — TEAD— got a little help accomplishing its mission from the very Warfighters it typically serves.

The Utah National Guard’s 118th Transportation Battalion spent their yearly training on TEAD getting real world experience in transporting munitions. The 118th is one of the newest Guard units, and the partnership between TEAD and the company was a win for everyone involved.

“This is the first opportunity we had [for training], and I wanted to make it a real-world mission,” said Capt. Brian Sorensen, Commander 118th Transportation Company.

A real-world mission that TEAD was more than willing to help provide.

“They needed to get some good quality training, and we needed some help moving munitions between the various storage locations,” said Col. Steven Dowgielewicz, Commander, Tooele Army Depot.

The Soldiers moved munitions both on the main Depot facility and between the main post and the south facility—a trek of about 20 miles on state roads.

“They can drive empty trucks to get training but real training is coming out and tying down loads, actually having to placard those loads so they are legal to go over the roads and handling the paperwork for what could be a hazardous cargo,” said Dowgielewicz. “They get real training that prepares them for their mission.”

The Soldiers on the ground could not agree more. “As a squad leader, it comes down to planning with my team. A lot of them are new Soldiers and hands-on training is how we become better at what we do,” said Staff Sgt. Jeffery Clement.

The presence of the 118th on the Depot had an unexpected benefit for the Army Civilians; it helped build morale and esprit de corps. “It gave our employees the opportunity to meet the people they serve,” said Glenda Bender, chief of Planning and Support, TEAD. “The training closes the strategic to tactical gap.”

Capt. Sorensen and TEAD staff planned the mission for more than a year. About halfway through, the COVID-19 pandemic struck forcing both the 118th and TEAD to reassess how to accomplish the mission.

“Both the TEAD commander and 118th commander put in policies and procedures meant to protect the Civilian workforce and the Soldiers,” said Sorensen. “Make it so our Soldiers are safe — ensuring that they can go back home and back to work safely.”

TEAD and the 118th followed the state’s and the Army’s guidance on mitigating the spread of COVID-19. Soldiers and Civilians did not share equipment and document delivery was contactless, as was loading and unloading procedures. When Soldiers and Civilians could not keep a physical distance of six feet, they donned cloth face masks.

In their week on Depot, the Soldiers of the 118th moved more than 625 tons of munitions between TEAD’s main post and the south facility. They transported another 1212 tons between locations on TEAD’s main post. In total, the Soldiers moved more than 3.5-million pounds of munitions. Their mission also saved taxpayers more than a quarter-of-a-million dollars in transportation and handling charges.

Their hard work not only helped the Depot but their fellow Warfighters as well. The manpower surge allowed TEAD to reorganize and better store munitions so that in the future it can deliver ready, reliable and lethal munitions to the Soldier in the field even faster than before.

Jeremy Laird is the public information officer for the Tooele Army Depot.