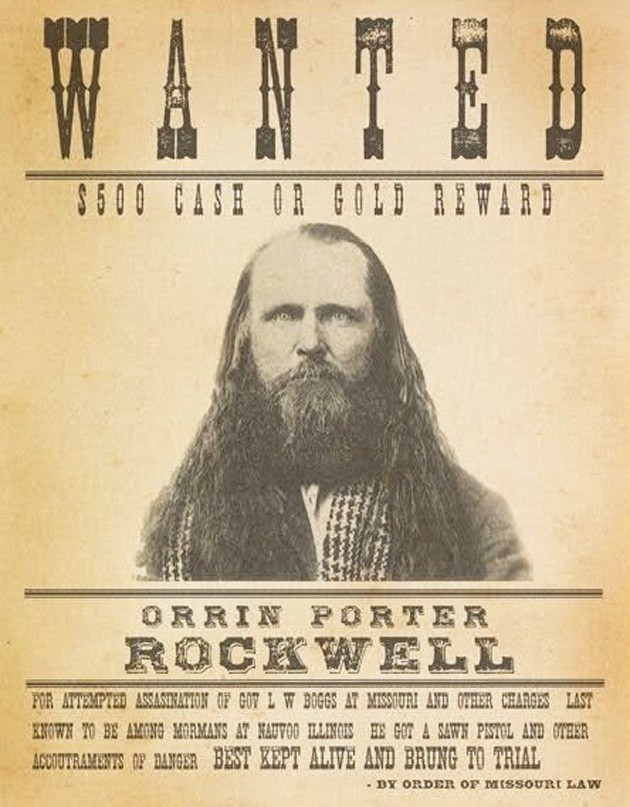 Rockwell's WANTED poster that was issued after he was suspected of the attempted assasination of Gov. Boggs.

“He was brave and loyal to his faith, true to the prophet Joseph Smith. A promise made him by the prophet, thru obedience fulfilled”

One of the most famous and notorious individuals ever to visit, frequent and work in the Great American Desert out along the Pony Express Trail in Western Utah, was Orrin Porter Rockwell.

The name “Rockwell” is a household name and well known to people in Utah and everyone who is interested in the Old West. Rockwell was Mormon Prophet Joseph Smith’s personal body guard and later was Brigham Young’s most trusted enforcer.

Over the years Porter’s fame and legends have grown and the tales of his exploits fascinate and fire the imaginations of all those who are interested in the settling and taming of the Wild West.

Much controversy surrounds Rockwell because he was involved in many questionable episodes, and was implicated by enemies of the Mormon church in numerous murders.

It has been said that Porter killed more men than Wyatt Earp, Bat Masterson, and Doc Holliday combined. Some put the number of those “Used Up” by Rockwell at 100 or more. It is unlikely that the number was anywhere near that high but there is solid documentation for the attribution of at least 25 killings to Rockwell.

Rockwell was a living contradiction of himself and anyone who would attempt to characterize him as he drank liquor heavily but religiously attended church. At various times by various people, he has been described as a US Deputy Marshall, sheriff, body guard, murderer, destroying angel, Danite, outlaw, hero, villain, mountain man, scout, business man, horse breeder, pioneer, and general defender of the common man.

Rockwell features very prominently in the goings on out in our West Desert during the time of the Pony Express and Overland Stage but before we get into all that we need to understand a bit more about this intriguing individual so we will start at the beginning.

Rockwell was born on June 28, 1813 in Belchertown, Massachusetts. At an early age he was a neighbor with and befriended by Joseph Smith. This was the beginning of a lifelong friendship between the two built on unwavering loyalty and trust. Joseph shared his revelations with Porter and Porter gained his testimony first hand from the Prophet. According to relative, John Rockwell, Porter was one of the first people baptized into the church. As a young boy Porter also cut wood and gathered berries to raise money for the first printings of the Book of Mormon.

Later, as the Mormons moved west and began to congregate in Jackson County, Missouri, the local populace became agitated due to the fact that Joseph Smith had anti-slavery sentiments and no doubt they took issue with some of the Mormon’s other beliefs and practices.

Because of their increasing numbers, the Mormons’ electoral power was also increasing. This could not be tolerated by the future Missouri bushwhackers, so Missouri Governor Lilburn Boggs raised a militia from 11 counties to expel the Mormons from Missouri.

As this conflict began to explode, Porter was right in the thick of it. He saw his family’s home burned to the ground along with many of his friends and he resolved from that point forward he would never be helpless again.

In May of 1842, an assassination attempt was made on Governor Boggs and he was severely injured. The blame was put on Porter and a large award was offered for his arrest. He was eventually arrested and spent 8 months in jail in horrible conditions awaiting trial but was finally acquitted by a grand jury.

When asked if he thought Porter was the guilty party, Joseph Smith responded by saying, “the fact that Gov. Boggs is still alive is proof that Porter didn’t do it because Porter wouldn’t have missed.”

When Porter was released from jail he had long hair beyond his shoulders, no money and was in poor health due to maltreatment. He walked over 100 miles, wearing his shoes thin without a place to stay until he finally arrived at Joseph Smith’s residence on Christmas Eve.

Joseph Smith was hosting a party at the time. Due to Porter’s tattered clothes and haggard condition, nobody recognized him. As he was about to be escorted from the premises, Joseph Smith recognized his old friend Porter at the last second.

Joseph Smith loved Porter and that night made him the promise that “if he remained faithful to the church and never cut his hair, he would never suffer death from a bullet.”

This promise is what separates Porter from all of the other gunfighters of the Old West. According to author Richard Lloyd Dewey in his biography of Rockwell, a whole new category of legends spawned of the supernatural. He went on to say that “all were intrigued by the matter of the long hair and the reputed supernatural immunity from bullets.” As time went by Porter acquired the nickname “Samson of the West.”

On June 27, 1844, Joseph Smith and his brother Hyrum were killed by a mob in Carthage, Illinois. The news of Joseph’s death rocked Porter to the core and it is something that he never fully recovered from.

After Joseph’s death, when Brigham Young became the next prophet, Porter became his most trusted and loyal personal bodyguard. As the Saints crossed the Great Plains, Porter’s skill as a scout, frontiersman, marksman and expert hunter were displayed time and again as he brought down buffalo and antelope to help feed the pioneers as they toiled on their way to the Salt Lake Valley. Porter was one of the first three Saints to enter the Salt Lake Valley on July 22, 1847.

He then went to California to raise money for the Saints and he even tried panning for gold but he soon realized he could make more money by serving the miners whiskey so he set up a saloon and sold drinks to the miners. He made a lot of money, a majority of which he paid to the Church in tithing when he returned to Salt Lake City.

On his way back to Salt Lake, Porter came in contact with a young widow who had lost all of her hair due to a bout with typhoid fever. This woman was Agnes Smith, widow of Joseph Smith’s younger brother Don Carlos Smith.

Feeling sorry for the woman and out of a sense of duty to a member of his friend’s family, Porter went to a barber and had the man cut off all of his hair and beard and then make a wig out of his hair for the widow. Porter’s great, great grandson, John Rockwell, stated in an interview that Porter went into hiding for a while after this so his hair could grow back thus returning in his mind, his supernatural protection.

John Rockwell also said that Porter believed that after he cut his hair, from that point on, he found it harder to control his desire for strong drink and cussing.

An interesting point to interject here is that all of the information we have about Porter is second hand because he couldn’t read or write and didn’t keep a journal.  Because of this some people characterized Rockwell as an illiterate brute who would too quickly resort to deadly violence.

However, what Porter lacked in book learning, he made up for in his uncanny ability to quickly and accurately “size people up” and sort of see right through them. This incredible skill served him well while tracking bandits and outlaws and no doubt while out maneuvering adversaries, discovering schemes, and hard dealing as he built his business empire.

In next weeks article we will continue our study of Porter Rockwell and discuss some of his exploits out in our West Desert and his seemingly other worldly confrontations.

Jaromy Jessop has been a frequent contributing writer to the Transcript Bulletin. He enjoys sharing his enthusiasm for the West Desert with our readers. Jessop grew up exploring the mountains and deserts of Utah and has traveled to all 50 states, U.S. Territories and a dozen foreign countries. He can be followed on Facebook at “JD Jessop” and on his Facebook group “American Tales & Trails.” Jessop retains the rights to his writing and photographs. His permission is required for any republication.