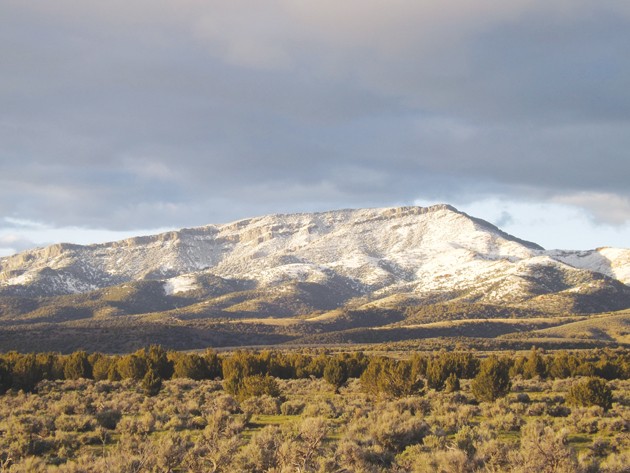 8,516-foot high Red Pine Mountain as seen from Government Creek at the south end of Skull Valley. This is area is where Porter Rockwell would build his ranch. What Porert Rockwell may have looked like around the time Johnston's Army arrived in Utah.

What Porert Rockwell may have looked like around the time Johnston’s Army arrived in Utah.

When Rockwell returned to Great Salt Lake City from his time in California, he served as a deputy marshal and his primary business was tracking down horse thieves, robbers and renegade Indians.

Continuing the theme of a living contradiction of himself, even though he was very close to Brigham Young and had the man’s unquestioned trust, he also found himself employed by the U.S. government on several occasions. This seems strange because the Mormons and the U.S. government had a mutual hatred for one another due to atrocities the Mormons had suffered and the suspicion and  distrust that the federal government held for the Mormons.

In spite of these things, Rockwell was employed as a trusted agent and scout by Colonel Edward Jennings Steptoe in 1854. Steptoe had been sent to Utah with approximately 300 Soldiers to investigate the massacre of Captain John Williams Gunnison and his party along the bank of the Sevier River west of Delta in 1853.  The Mormons insisted that Indians were the guilty party but some of those in the Government believed the Mormons, if not guilty themselves of the outrage, had at least a hand in stirring up the Indians.  Rockwell was sent with several others to apprehend the Indians who supposedly had committed the crime and turned them over to the authorities.

Later that year, Rockwell, George Bean, George Boyd and several others were tasked by Col. Steptoe to explore a route the Army could take out of Utah to California and Oregon. Rockwell and his group left the military reservation on Rush Lake and headed over the mountains near present day Johnson’s Pass. They crossed Skull Valley and the southern end of the Cedar Mountains passing White Rocks and continued. out past Granite Mountain to Redden Springs. While crossing the salt flats west of Granite Mountain, they suffered a horrifying episode as a wicked storm developed and the wind blew with such force that it stripped the packs from the backs of the mules. George Bean stated in his diary that  the storm coated the men from head to toe with freezing whipped up salt slush that formed a hard white crust, head to toe, over man and beast.

The men, convinced that this route was not feasible, returned via a more southerly route passing the north end of the Fish Springs Mountains. While bending down to get a drink of water, they were astonished to find, just a few feet below the water surface in the pool, mummified burials of Native Americans standing bolt upright in the water, their feet weighed down by stones. After this grisly discovery, the little group returned directly across the desert.

Upon hearing the report of the unsuitability of the central route for travel, Col. Steptoe employed Rockwell as a guide as he and his command left Utah via the northern route around the Great Salt Lake. It seems odd that Brigham Young would allow his most trusted bodyguard to develop a relationship with Col. Steptoe. Rockwell had obviously gained that officer’s trust and it was likely Brigham wanted his man as close to Steptoe as possible so he could gain intelligence and learn the Army’s intentions.

It was during his time working with Steptoe, or possibly even before, that Porter fell in love with the solitude and serenity that the south end of Skull Valley provided. He began to raise horses in between the Sheeprock and Simpson mountains along Government Creek. Rockwell was described as a private man who, if he had the choice, would keep to himself out on his range. Unlike others who gained fame and notoriety in the old west, Rockwell did not seek attention or aggrandizement of his reputation.

A few years later, instead of being a useful contractor for the U.S. Army, Porter would become one of its worst and most successful antagonists. In July of 1857, Rockwell was carrying some mail near Fort Laramie, Wyoming when he learned of the approach of Johnston’s Army, a 2,500 strong force of federal troops, which was being sent out west of Fort Leavenworth, Kansas to Utah by President Buchanan to end a supposed Mormon uprising. With this news, Rockwell, accompanied by several others, went on a brutal 400 mile forced ride until they finally arrived at Silver Lake in Big Cottonwood Canyon on July 24, delivering the news to Brigham Young as over 1,000 Saints were celebrating Pioneer Day.

Brigham Young determined that the progress of the U.S. Army across the plains had to be hampered and slowed so the Mormons could prepare their defenses and repel the Army. Therefore, a remarkable and very successful campaign of guerilla warfare was launched to impede the Army’s progress and Porter was right in the thick of it.

Several groups of raiding Mormons were established led by the purported Danite Chiefs — Bill Hickman, Lot Smith and Porter Rockwell. The Danites, or Sons of Dan, are what the Mormon prophet’s chief enforcers were called. The reference comes from the bible, Genesis 49:17,  which calls Dan a serpent in the road that bites at horses’ heels. The name Dan also means “Judge.” It was believed by the non-Mormons, who were known as Gentiles, that the Danites were sworn to work for the utter destruction of apostates or people who had been identified as obnoxious or harmful to the church. It was also believed that the Danites would keep the group’s secrets at all costs. Many of these men, Porter Rockwell included, looked like Old Testament prophets. When these bands of fanatical warriors descended upon the Army’s unguarded supply trains in lightning cavalry strikes the teamsters and herders fled outright, abandoning their wagons and herds, terrified by the horrible stories they had heard around campfires while heading west of the murderous Danites.

When Rockwell would charge with his band of unconventional cavalry, whether fighting Indians or descending upon a government herd or wagon train he would yell “WHEAT!” And then fearlessly plunge himself headlong into the fray. Imagine being a teamster or hostler working for the Army and hearing the shrieks and battle cries of the Mormons. Then the scene of Rockwell, long hair flowing in the wind with pistols drawn, descending upon your position. It is likely that the men faced with such a situation, lost control of some bodily functions. While having a near heart attack, they threw themselves on the ground and begged  for mercy.

All the rumors of villainous Danites aside, the Mormon forces showed tremendous restraint as they led a masterful delaying action against Johnston’s Army. They scattered horses, drove off over 600 head of livestock, pulled apart wheel pins of wagons in the night, burned the prairies in advance of the Army to deny their animals feed and burned several whole wagon trains. During all of these raids and guerrilla warfare activities, not one U.S. Soldier or contract employee was killed by the Mormons.

These tactics stalled, and disheartened the federal troops and forced the Army into a miserable winter at Fort Bridger, all the building of which had been burned by the Mormons prior to their arrival at that place. This ultimately caused the federal government to agree to station the Army at Camp Floyd, 40 miles away from Salt Lake City. After the initial drama of the Utah War, the Army settled in and Porter did as well. He apparently worked as a U.S. deputy marshal, sometimes from Camp Floyd itself where he was well known and even liked by some of the U.S. Army officers. Porter seemed to have a naturally good disposition and personality that allowed him to get along with and be in good favor of the Mormon prophet, Mormon people and the Army all at the same time.

Jaromy Jessop has been a frequent contributing writer to the Transcript Bulletin. He enjoys sharing his enthusiasm for the West Desert with our readers. Jessop grew up exploring the mountains and deserts of Utah and has traveled to all 50 states, U.S. Territories and a dozen foreign countries. He can be followed on Facebook at “JD Jessop” and on his Facebook group “American Tales & Trails.” Jessop retains the rights to his writing and photographs. His permission is required for any republication.