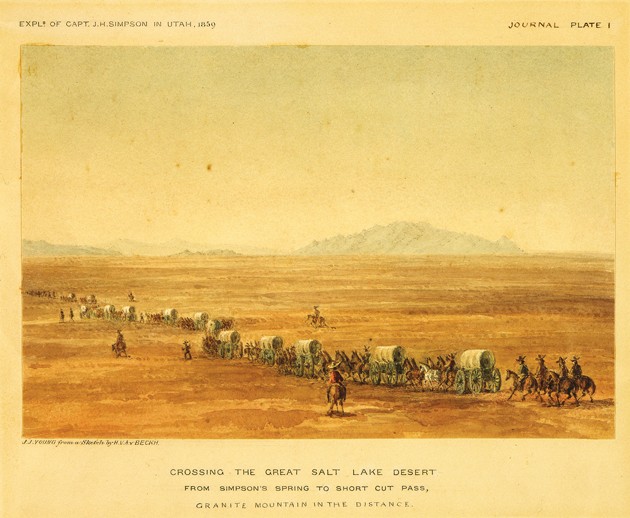 An artist's drawing from Simpson's 1859 report. The artist who captured this scene did a masterful job depicting Granite Mountain in the distance. The drawing is of Simpson's party somewhere west of Simpson Springs along what would become the Pony Express and Overland Trail.

“Do not follow where the path may lead. Go instead where there is no path and leave a trail”

In last week’s article, we left off with Simpson and his exploring party standing in

Dugway Pass, greatly disappointed that due to the lateness of the season they could not complete their reconnoiter of the desert.

Full of determination, Simpson and his expedition returned to Camp Floyd and began working on preparing for the completion of the reconnaissance, which was authorized for the next year.

Finally, on May 2, 1859, after “walking the line” which is when a military officer has all of his wagons and men lined up for inspection, the Simpson survey party rolled out of Camp Floyd on the greatest exploration ever of the Great Basin.

This was quite a group and it would have been very interesting to see as the train labored across the wide valleys of the West Desert, no doubt, a tremendous curiosity to the Indians.

There were 12 six-mule quartermaster, or supply, wagons, and two wagons for the conveyance of the party’s scientific instruments.

These instruments consisted of sextants, artificial horizons, chronometers, barometers, inclinometers, and all manner of other scientific apparatus.

There was a military escort commanded by 2nd Lt. Alexander Murry, which consisted of three non-commissioned officers and 18 privates — 10 of which were heavily armed and well-mounted “Dragoons” or cavalry.

All in all there were 64 members of the party and 14 wagons. As you can see, this was a large expedition.

Much of the territory they were about to enter was un-mapped, hostile Indian territory. This was a real frontier adventure in the extreme.

In light of this fact, Captain Simpson stated in his report that the members of the topographical party were each provided with a Navy Revolver and that “of course” the military escort had its proper arms.

“These valleys are very sparsely watered, and though the soil itself has all the properties of fertility, yet for want of the necessary moisture, for agricultural purposes, it is utterly worthless,” he wrote.

Simpson was right in these assumptions as a majority of Rush and Cedar Valleys remain arid sagebrush wastelands, much as they were in 1859.

Oftentimes when I drive State Highway 73 from Lehi to Tooele, I gaze up Pole Canyon in the Oquirrh Mountains from the area west of Fairfield and daydream about walking the high ridges or lazing under an ancient fir.

Simpson commented on this same scene, “The Mountains limiting the valley are at points quite formidable. The Oquirrh Range, dividing Cedar and Rush valleys, discovering along its crest in mid-summer, shreds of snow which the sun has not been able to dissipate.”

The Simpson Party rumbled it’s wagons on west through Rush Valley, up and over Lookout Pass and on out into the desert, camping at Meadow Creek — Faust Station, Lookout Station Valley, Simpson Springs, just west of Dugway Pass, Fish Springs, and the Great Salt Lake Desert.

Simpson made some interesting observations here, “The country passed over is as desert a region as I ever beheld, scarcely a spear of grass visible, and in some areas not even, the characteristics of an arid soil, grease wood or sage. In some places the ground is perfectly bare of everything and is smooth and polished as a varnished floor.”

Simpson went on to describe the crude mail station at Fish Springs, the towering sight of the Deep Creek Range to the west and passing several six mule teams of the mail company on their way to Salt Lake City.

Think about that for a minute. A six-mule team pulling a mail wagon through the desert, a hostile Indian country. The mail wagon drivers employed by George Chorpenning must have been super brave to travel these lonely trails without an escort.

Finally, the party came in contact with some Goshute Indians near Willow Creek.

Simpson spared no expense in describing them in detail as he saw them.

“We have today seen a number of Goshute Indians. They are most wretched looking creatures, certainly the most wretched I have ever seen, and I have seen great numbers in various portions of our country. Both men and women wear a cape made of strips of rabbit skins, twisted and dried, and then tied together with strings, and drawn around the neck by a cord. This cape extends just below the hip and is but a scant protection to the body. They seldom wear leggings or moccasins, and the women appear not to be conscious of any impropriety in exposing their persons down to the waist,” he wrote.

Simpson was obviously taken aback by the sight of the Goshute at first but he showed great humility and kindness to the Goshutes during the remainder of the trip.

Simpson spent some time talking and exploring a bit with our old friend Henry “Doc” Faust at Pleasant Creek just south of the Deep Creek Range. Doc Faust took Simpson to see a camp of Goshutes and described the potentials of the country and the Indian farm at Deep Creek, 25 miles to the north.

These tales and countless others provide one with an interest in the west desert, a treasure trove of reading enjoyment. Simpson was a fabulous writer who possessed a high literary skill. His report and journal is a must read for anyone who is interested in Utah’s West Desert and the Pony Express Trail.

Use caution though, because once you begin to read his voluminous work, you may not be able to put it down. Even though the report was submitted in late 1859, due to the outbreak of the Civil War, this incredible work was shelved for years. Then in 1876 it was published as “Report of Explorations across the Great Basin Territory of Utah for a direct Wagon-Route from Camp Floyd to Genoa in Carson Valley.”

I felt it expedient to insert this article into the Pony Express series because anyone who travels that route today, should certainly be aware that this report was instrumental in Russell, Majors, and Waddell’s decision to have the Pony Express Route pass through our West Desert.

Some other significant contributions of the report were the many geographic features such as the House and Thomas ranges that Simpson named. Students of Utah History will no doubt be interested to know that we have Simpson to thank for the English translation of Father Escalante’s journey to Utah in 1776.

The original Spanish manuscripts were obtained from a friend’s personal library in Washington, D.C. and translated per Simpson’s order in preparation for his trip. Simpson’s report is a masterpiece that should not be missed that will be noted often as we continue our exploration of the Pony Express Trail and surrounding areas in Tooele County.

The University of Michigan maintains a large collection of old west texts, military exploration reports and other items of interest from the 1800s. You can read Simpson’s report in full at this site. When you get there, choose the option: Read Full Text: quod.lib.umich.edu/cgi/t/text/text-idx?c=moa;idno=ABA0861

Local Historian Jesse Petersen studied Simpson for decades and his work culminated in a book entitled, “A Route for the Overland Stage.” This book covers Simpson’s expedition day by day and much more. It can be previewed at the following site: digitalcommons.usu.edu/cgi/viewcontent.cgi?article=1113&amp;context=usupress_pubs

These maps cover a good auto tour route from Camp Floyd to Ibapah.

Jaromy Jessop has been a frequent contributing writer to the Transcript Bulletin. He enjoys sharing his enthusiasm for the West Deseret with our readers. Jessop grew up exploring the mountains and deserts of Utah and has traveled to all 50 states, U.S. Territories and a dozen foreign countries. He can be followed on Facebook at “JD Jessop” and on his Facebook group “American Tales & Trails.” Jessop retains the rights to his writing and photographs. His permission is required for any republication.