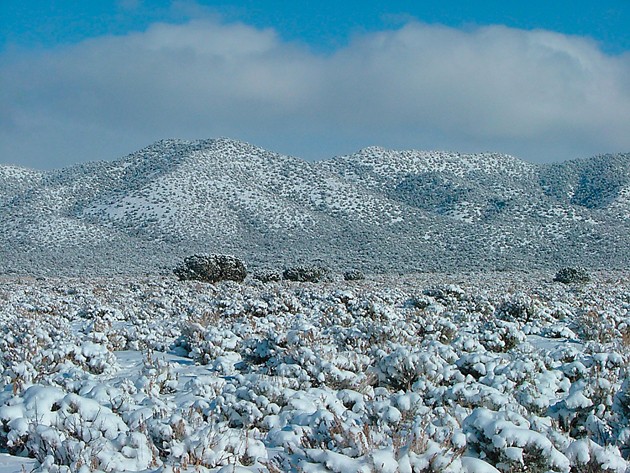 February 23, 2017
Desert terrain west of Lookout Station is the stuff of dreams

Editor’s note: This is another installment in a multi-part series on exploring the Pony Express Trail through Tooele County. Last week’s article covered Lookout Station and Aunt Libby’s Pet Cemetery on Lookout Pass.

The terrain west of Lookout Station is something that many people daydream about. I know I have sat in class or at work, thinking about all of the fascinating places I could explore in the desert if only I had 100 lifetimes.

Before we leave Lookout Station, consider the following: Eleven years before Horace and Libby Rockwell ever set foot on the ground at Lookout Station, Capt. James H. Simpson and his exploring expedition made camp on practically the same spot. Here is his description of the night they spent near Lookout Station:

“In about a mile more, by a good grade, you reach the top of the pass … by steep descent, you attain a spot where is a patch of grass, and where we encamped. May 4, 1859. This morning at daylight we found that a driving snowstorm had set in from the west and about 6 inches of snow had fallen. The Sibley tent, occupied by some of the assistants, had become prostrated, under the combined effects of snow and wind, and when I saw it, its occupants were still under it 5:30 a.m. 32.5 degrees.”

I’ve been on scout camps where it snowed heavily in the night and the whole tent sagged in on us, so I can vividly picture what Capt. Simpson described.

Heading west from the area of Lookout Station, the road climbs to a low rise, passes through a few junipers and then descends a steep grade into Skull Valley. Once you are at the bottom, a road cuts off to the left and south. This is Little Valley Road and there are good camping and exploring spots off in that direction towards Red Pine Mountain.

About half a mile beyond that point another road takes off to the north. This is Davis Knolls/Terra Road and it runs from the west base of Lookout Pass 16 miles north along the foot of the Onaqui Mountains to the town of Terra and state Route 199. The road is ideal if a person is looking for a place to get out into the desert without traveling a great distance. Davis Knolls is a group of low hills that rise to a maximum elevation of 5,862 feet. They are heavily wooded with Utah juniper in places and completely barren in others. They are a good place to explore, camp and gaze in wonder at the stars that are on full display on the back side of the Onaqui Mountains after sundown.

As you continue along the Pony Express Trail past Davis Knolls/Terra Road, you will round some low mountains on your left. At the point of these hills another road will cut off straight towards the west. This is the Dugway Cutoff and if you follow it you will arrive at that place in about 10 miles.

At about this same point, you might notice a small 3-foot-high concrete marker in the shape of the Washington Monument that says “Pony Express Trail.” These markers were placed by the CCC back in the late 1930s. In our desert it seems they were set every mile or so.

Unfortunately, some idiots have taken to breaking them off. There is no excuse for vandalism of our historical relics. Hopefully, people traveling the trail will realize that we are each only a flash in the pan of history, and if our story is to endure, it will require respect and protection of our historical artifacts.

Continuing west past the Dugway Cutoff, you will have incredible views of two mountain groups. On the right is the pyramid-like summit of Davis Mountain Round Top. This peak rises in conical form to an elevation of 6,430 feet, which makes its solitary existence on the edge of Skull Valley stand out like a sore thumb. This mountain has a distinctive water mark on its bench at about the 5,400-foot level on the north side. This water mark was cut into the mountain by the wave action of Lake Bonneville over 20,000 years ago. The water marks are likely more distinct on the northwest aspect of the mountain due to waves being driven by prevailing winds.

If you look to the southwest as you continue along the trail, you will see a picturesque peak that rises abruptly to its 8,410 and 8,402 foot-high matched summits. This mountain block is known as Indian Peaks and they form the high point of the Simpson Mountains, which are named after Capt. Simpson. After a few more miles, you will come to a major dirt road intersection in the middle of the south end of Skull Valley. If you turn right, in about 10 miles you will arrive at Dugway. If you turn left, in about 11 miles you will arrive at Erickson Pass.

The Erickson Pass road is a total joy to explore. There are several remote canyons in both the Simpson Range to the west and the Sheeprock Range to the east that can be explored via old mining or ranching roads.

For the more adventurous, you could strike cross country through the junipers to the peak or canyon of your choice. This terrain is different than much of the rest of the area traversed by the Pony Express Trail. Most of the land in between the Simpson and Sheeprock ranges is covered with Utah juniper forest and big sagebrush.

This area is known as “Porter Valley” but it’s not named after Porter Rockwell as you might think because his ranch was located halfway up this valley. Instead, it was named by Capt. Simpson after Fitz John Porter, adjutant of Johnston’s Army in Utah.

About 2 miles beyond the major dirt road junction, the Pony Express Trail drops into Government Creek. I have not been able to find attribution, but back in 1863, the U.S. Army reportedly established a temporary post here to deal with Indian troubles. These men, however, due to a lack of quality leadership, ended up causing troubles of their own that eventually resulted in several of their deaths. We will discuss that tragic episode and a recommended route to the summit of the Indian Peaks and Davis Mountain in next week’s article.

Keep in mind that all of the roads mentioned in this article can be difficult to travel in inclement weather. Plan accordingly so that you are not on the desert when significant rain occurs, or you and your vehicle may get stuck.