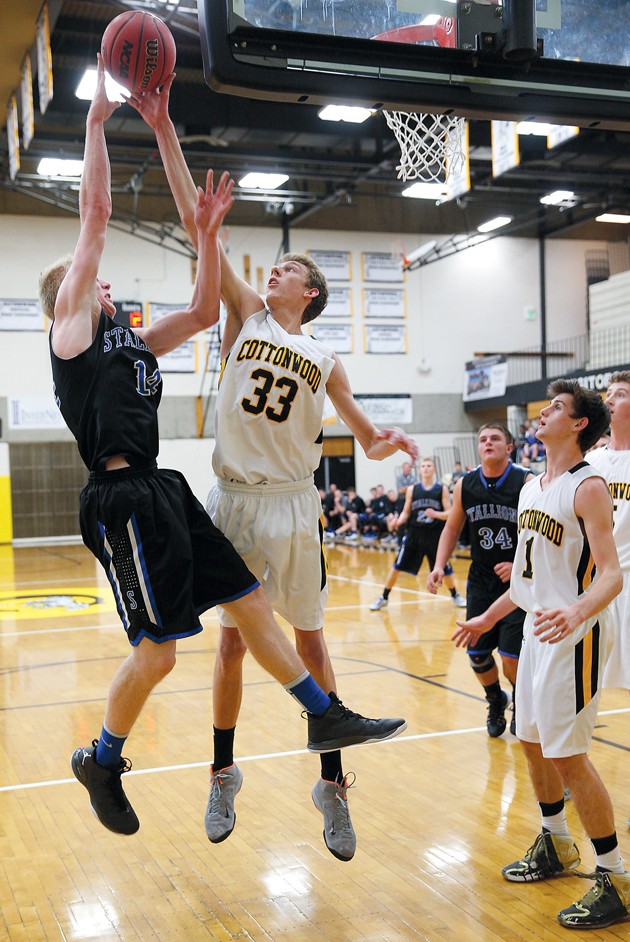 It took a miraculous buzzer-beater on Tuesday night to keep the Stansbury boys basketball team from becoming the second Tooele County squad to steal a victory from Cottonwood on its home court.

Noah Montano drained a 3-pointer from the right corner as he fell out of bounds with time running out in the first overtime, and Cottonwood pulled away for an 89-74 win over Stansbury in double overtime.

“We talked about perhaps fouling him and making him shoot two free throws,” Stansbury coach Rich Lakin said. “Credit to [Montano] — I’ll let him have that 10 more times and I bet you he only makes it twice. A 20 percent chance of making that again — I’ll take those odds.”

The Stallions (1-4) forced overtime on Colton Christiansen’s 3-pointer from the right wing with three seconds left in regulation. The Stallions appeared to take control of the game with a quick six-point burst late in the first overtime, as Dakota Fidler, Gage Manzione and Kyle Lindsley all scored on layups to put Stansbury in front 68-64.

McKay Hatch scored with 12 seconds left to pull the Colts (2-2) within two points at 70-68. The Stallions drew a foul and converted one of two free throws with 7.7 seconds left, setting the stage for Montano’s game-tying shot.

Missed free throws were a recurring theme for Stansbury, which was 14-for-27 from the foul line.

“If we improve ourselves on free throws a little bit, that will help us in the long run,” Manzione said. “We missed a couple of key free throws late in the game.”

Cottonwood scored the first nine points of the second overtime, while the Stallions failed to convert on any of their field-goal attempts in the period.

“We gave ourselves a chance to win,” Lakin said. “Since [Manzione] came back, we’re getting better. I told these guys that if we kept the turnovers under 10, we would win. We had more than 10, so that’s what it came down to. We’re getting better.”

Stansbury was pleased with its effort in the fourth quarter that led to the game going to overtime. The Stallions trailed 57-45 with 6:30 left, but limited the Colts to just one field goal as part of a 14-2 run that was capped by Christiansen’s game-tying shot.

The Colts had a chance to clinch the game on a fast break with eight seconds left, but Malik Johnson’s layup attempt was blocked by Fidler to set up Christiansen’s shot.

“I think what worked for us was our guard play, getting it down low to our post men, and our post guys being able to kick it back out and the guards hitting some pretty key shots late in the game,” said Manzione, who led the Stallions with 20 points.

Montano led all scorers with 29 points for Cottonwood, while Hatch, the Colts’ 6-foot-8 center, had 25 points and was a dominant force defensively and on the boards after being held scoreless by Tooele a week earlier.

Fidler had 14 points for Stansbury, while Lindsley and Andrus each had 13. Christiansen finished with eight points, and Wanlass, Daniel Merritt and Alex Kimberling each had two.

“Down 12 points and we came back, that’s what you call execution,” Lakin said. “We talk about being good to great. We were in between good and great. We played well.”