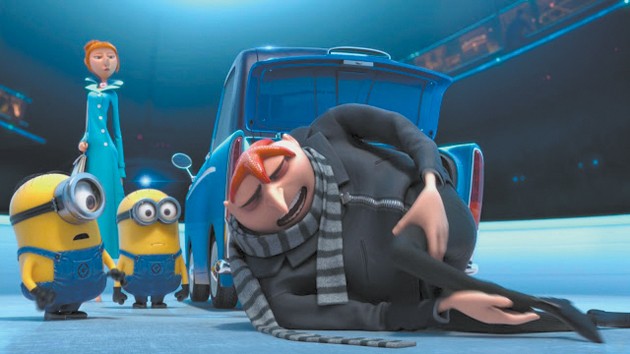 Everyone’s favorite animated reformed-supervillain-who-is-voiced-by-Michael-Scott is back in “Despicable Me 2” with more minions, gadgets and gags.

The result? So silly, and so much fun.

After turning away from a life of crime, Gru (voiced by Steve Carell) is adjusting to being a family man, caring for Margo (voiced by Miranda Cosgrove), Agnes (voiced by Elsie Fisher) and Edith (voiced by Dana Gaier), and starting a legitimate business making jams and jellies with longtime cohort Dr. Nefario (voiced by Russell Brand) and a host of minions. That project is derailed after Dr. Nefario leaves to pursue criminal schemes for another employer and Gru is kidnapped by Lucy Wilde(voiced by Kristin Wiig), an agent with the Anti-Villain League.

The Anti-Villain League has been eyeing Gru for quite some time, and, now that he’s ceased his criminal activities, wants him to help stop a supercriminal who has stolen a potent and dangerous chemical formula. Although hesitant at first, Gru agrees, happy to use his skills and resources to save the world (and impress his daughters while he’s at it).

Gru and Lucy team up, undercover at a mall bakery, trying to figure out which of their fellow mall business owners, including characters voiced by Benjamin Bratt and Ken Jeong, is a supervillain in disguise. Meanwhile, the girls try to find love for Gru, and the minions mysteriously start disappearing.

If you liked the minions in “Despicable Me,” you’ll love this one — and if you didn’t like them, steer clear — because they’re all over the place. There are also lots of nods to the original, which should gratify fans, but not so much or placed in such a way that new viewers won’t understand the story. And if your kids aren’t completely full of wiggles after an hour and a half, stick around through the first part of the credits, where three minions hold auditions.

Those auditions, actually, have possibly the best use of 3D I’ve ever seen, especially in a kid’s movie. As a whole, the 3D doesn’t make a noticeable difference, but there are some places where the depth effect is fun and skillfully used.

The story itself is pretty straightforward, and there aren’t a lot of twists and turns along the way. The characters, though, do seem to credibly grow from where they left off at the end of the first movie, and the ending of this one opens the storyline in such a way that you feel like if they made more movies, they wouldn’t be ridiculously contrived. As far as stacking up to its predecessor, it’s not quite as good in some ways, better in others, but overall avoids a sophomore slump.

This movie is definitely silly. But, it’s geared towards kids, and kids love silly things. And since my maturity level often hoovers at about the same level as most 7-year-old boys, I thought it was hilarious. But even though there are a lot of slapstick moments, many of the gags are clever and have some finesse, which makes the tiny adult part of my brain — and probably also the rest of the adults in the theater — feel way better about how much it made me laugh.

No third movie has been announced, but if they do make one, I would go to see it without hesitation. These guys know how to do a sequel right.