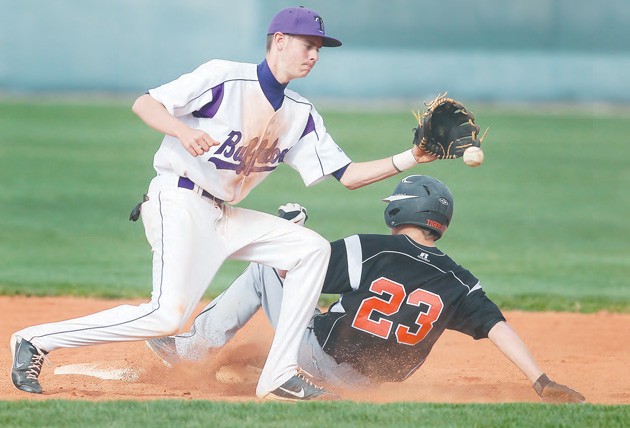 Tooele sophomore infielder Justin Pollmann catches the ball at second base Thursday against Ogden. Pollmann had one of Tooele’s four hits in the game.

Tooele had plenty of chances to score runs but just couldn’t get it done with runners on base and Ogden made them pay for it Thursday afternoon. Behind a strong pitching performace of Brian Saunders, Ogden shut down Tooele 8-0 at Dow James Park in Tooele. With the loss the Buffaloes dropped to 3-5 in Region 11 one game behind fourth-place Morgan who they face today in Morgan

Ogden also did plenty from the plate as Hunter Anderson went a perfect 4-for-4 with a double and three singles while knocking in two runs for the Tigers in the victory.

Tooele had its first chance to score right in the first inning when Wesihaupt singled and made his way to third after a stolen base and a ground out. Chris Lane also reached on a walk but the Buffaloes couldn’t get a run in.

Ogden was the first to take advantage of their scoring opportunities when Michael Richardson started the third with a triple and later scored the first run of the game on a passed ball for a 1-0 lead.

A couple of Tooele errors kept the inning alive for Ogden and Anderson made them pay as he nailed a RBI double to right-center for a two-run lead. Kameron Laird doubled the lead with another double to right-center to give Ogden a 4- 0 lead in the middle of three. Tooele had a chance to counter in the bottom half when Weishaupt doubled with one out but again the Buffaloes couldn’t take advantage.

Ogden looked to add to their lead in the fifth when JJ Stein started with a one-out single and stole second. Stein was later able to score on a Tooele error for the fifth run. Ryan DeYoung brought in another run with a single just over shortstop with the bases loaded to bring in one and give the Tigers a 6-0 lead.

A one-out single by Stein and then subsequently getting to third after an error and a sacrifice fly started a rally for Ogden in the sixth. Anderson knocked in his second RBI of the game with a single to center for a 7-0 lead in the middle of six.

Ogden opted for the insurance run in the seventh when Alex Halverson started the inning with a single and then stole second. Richardson brought in Halverson with a single to right for a commanding 8-0 lead in the middle of seven.

Tooele couldn’t get a rally started in the bottom of the seventh off of Saunders. Picking up two strikeouts in the final inning and ending the game with 10, Saunders finished off his shutout victory over Tooele. Tooele will look to get back to its winning ways when they travel to face Stansbury on Thursday at 3:30 p.m.