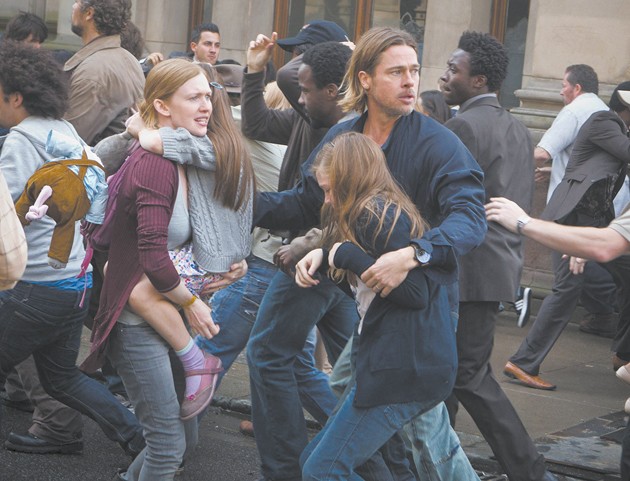 Brad Pitt, as Gerry Lane, tries to protect his family from a zombie epidemic in “World War Z.” Courtesy Plan B Entertainment

Although “World War Z” is based on a book, the similarities pretty much end at the title.

Where the book is a series of “oral histories” from survivors of the war against multiplying hoards of zombies, the movie is mostly Brad Pitt running from or killing zombies across the globe. But as long as you don’t think about the fact that the second is supposedly based on the first, and ignore some gaping plot holes, the movie’s all right.

Brad Pitt stars as Gerry Lane, an ex-UN investigator who stepped down from that job to focus on being a full-time dad to his two daughters. One day, the family of four heads out into the streets of Philadelphia (taking the girls to school, maybe? Escaping the rising threat of “African rabies”? I must have missed something), where their world quickly descends into chaos. Thanks to some fancy driving and quick grand theft RV, the family escapes to New Jersey, where they hole up for the night with another family until Gerry’s former employers can send a helicopter for him at daybreak. As they rush to the top of the building, their host family is mostly eaten, but they make it to the helicopter, which flies them to the safety of a navel carrier.

Their arrangement comes with a catch — Gerry must help them figure out where and how the zombie plague originated to give them a fighting chance of beating it, or they’re back in Philly before sundown.

So, Gerry finds himself on a base in North Korea, where the first use of the word “zombie” was found in an email sent from there. The trail of breadcrumbs then leads to Israel, which shut down its borders a week before the outbreak reached epidemic levels. There, he is told by Jurgen Warmbrunn (who is an actual character from the book, and played here by Ludi Boeken) that Israel barricaded its city after investigating whispers of a zombie outbreak in India. Gerry is about to set off for India, but zombies make his pilot take off early, and he catches one of the last planes out of the city and heads to Wales, where, accompanied by an Israeli soldier he rescued (Daniella Kertesz), he decides to try to test his hypothesis for defeating the undead.

There are problems with this movie. You can pretty much tell who’s going to die as soon as they come onscreen, for one, and you know it will never, ever even sort of be Brad Pitt. The end is stronger than the beginning, but it, too, teeters at times. Parts of the movie seem to move at a blindingly fast pace, so that details are lost (like at the beginning — seriously, where are they going, and why does stealing some poor schmuck’s RV seem like the most logical action?), but other times drag a bit. I think the technical term is that it’s “uneven.”

And yet, when it hits, it hits right on the mark. At times you can feel the growing claustrophobia of the plague closing in. There are some cheap jolts with zombies popping out of nowhere, but for the most part, director Marc Forster (“Quantum of Solace”) keeps the fear at a slow burn. Overall, the movie seemed to improve as it went on; if the first half or two-thirds (which I’d describe as “2012”-esque) was as good as the rest (more of an “I Am Legend”), it would have been pretty great.

As it is, it’s still not as good as the book, which is definitely worth your time to read, but it’s a fresher take on the zombie theme and amounts to a decent flick.