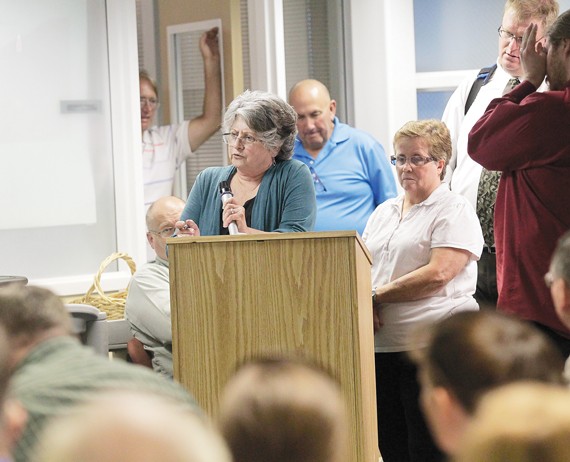 Susan Poulson talks to the Tooele County School board with a line of residents behind her Tuesday at a truth in taxation hearing at the district office.

The Tooele County School Board raised taxes Tuesday night with the doggedness of a schoolmarm standing up to a roomful of unruly students.

After two hours of impassioned testimony against the tax hike by a crowd of more than 100 at a truth in taxation hearing held in the board room of the district office, the board voted to go ahead with the 9.1 percent increase over the 2012 certified tax rate.

“I have never voted for a tax increase before,” said Jeff Hogan, Tooele County School board member. “I was the lone dissenting voice four years ago when we raised taxes, but we don’t have another alternative.”

Hogan explained that over the last four years the board has cut expenses and relied on money from the district’s fund balance to make ends meet.

“That’s why we are here now,” said Hogan. “The next cut must be in people, most likely educators, and that will mean an increase in class size.”

Terry Linares, Tooele County School District superintendent, pushed for the tax hike by reviewing a lengthy list of cuts the district has made in the last four years as revenues decreased.

“We know you don’t like the tax increase,” Linares told the audience. “But we have cut expenses, and we have cut a lot, but we have 14,000 students to educate.”

The audience was not sympathetic.

“I’m worried about the philosophy and sustainability of your plan,” said Seth Herring, of Tooele. “The burden is placed on taxpayers first. We need a paradigm shift or some major change because tax increases just aren’t the answer.”

Bryan Coulter, of Erda, was ready with suggestions of where to make new cuts.

“Cut all activities and clubs, sell the sports fields, go to Internet schools and shut down buildings and liquidate assets,” said Coulter. “I have had a 30 percent decrease in my pay over the last four years, but I pay $4,000 more in taxes to the government. We are paying through the nose and we are tired of it.”

Jenny Estrada, of Stansbury Park, said that the recession has hit her hard and she is still struggling.

“The tax increase will be hard,” said Estrada. “It is like you are trying to get blood out of a dry vein.”

Some property owners expressed dismay that even without the proposed increase, just the adoption of the new certified tax increase would cause their tax payment to increase.

Griffiths and other taxpayers whose assessed value of their real property did not drop this year will experience what Lark Reynolds, Tooele County School District business administrator, called the “double whammy.”

State law allows the school board to adopt, without a hearing, a tax rate that will let them collect the same amount of money in property tax as they collected the previous tax year. That new rate is called the “certified rate,” and it can raise significantly when property values drop.

Homeowners in Utah get a discount on property tax with tax for a primary residence being based on 55 percent of the assessed value. Business and other property is taxed at the full assessed value.

When the public was through speaking, after a long pause, board member Jeff Hogan made a motion to adopt the 9.1 percent increase over the certified rate.

Karen Nelson offered an amendment to the motion reducing the tax increase to 7.1 percent.

“When we adopted the tentative budget, we did not know what the certified tax rate would be,” said Nelson. “I would not have voted for something that would cause a 20 percent increase in some people’s tax. The 7.1 percent would still be a heavy burden, but it would help mitigate the impact a little.”

While the audience was decisively against the tax increase, board members said that their discussions with the public and phone calls were not as lopsided.

“I don’t want the silent majority to be overruled,” said Hogan. “The majority of my constituents, when I lay out the facts for them, support the tax increase.”

The board rejected the amendment to lower the tax increase by a 5-2 vote, with Nelson and Carol Jensen the lone supporters of the amendment.

The lowered tax rate would have left the budget with a $457,000 shortfall to be made up out of the fund balance.

“As a board we’ve recognized that it is not a fiscally prudent policy to live off of our savings year after year after year,” said Scott Bryan, Tooele County School District Board president. “We choose to adopt a budget which allows the district to have our revenue meet our expenses. This is a wise financial practice and ultimately drove the decision of the board on Tuesday.”

The board then voted 5-2 to adopt the 9.1 percent increase with Nelson and Jensen the only negative votes.

“We’ve cut millions out of the budget in the last four years while adding enough new students to fill two new elementary schools,” Bryan said “We have cut just about every possible way without affecting student instruction and the quality of education our students receive. The hard reality is if we want to keep class size stable we needed to increase the taxes this year.”