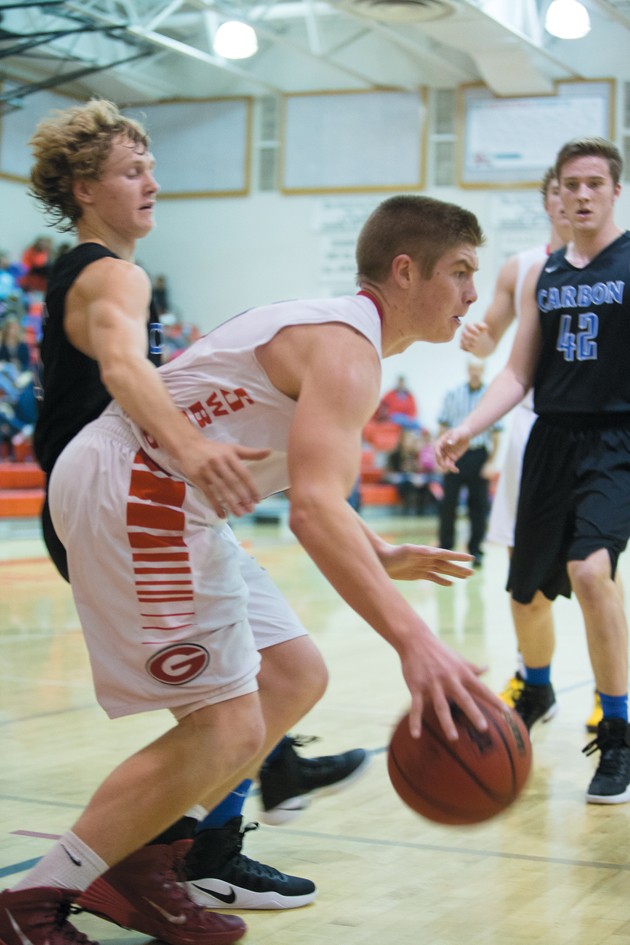 Grantsville junior forward Brady Arbon makes a move to the rim during Friday’s 60-51 loss to Carbon. Arbon scored 21 points in the contest.

To say Grantsville head coach Bryan Detweiler wasn’t pleased with his team’s performance in Saturday’s 60-51 loss to Carbon would be a little bit of an understatement.

“Carbon outworks Grantsville,” Detweiler said, dismissing the easy excuse of fatigue during the team’s third game in four days. “I don’t believe in tired legs when [Carbon played Stansbury the night before]. You can point to that, but I’m not going to make excuses.”

Early on, the Cowboys had a 10-3 lead and hadn’t allowed Carbon to score more than twice through six minutes of play.

But the Dinos went on a 7-0 run through the second quarter that kept it close, and first took the lead on a driving layup by senior guard Jamin Jensen to make it 19-17 with 20:05 left in the half.

Carbon did well with its drive-and-kick offense to get open looks from beyond the 3-point line, eventually leading by eight points midway through the final quarter and extending that from the foul line to 12 points with only seconds left.

“Brady gave a strong [effort] down low, attacked the rim,” Detweiler said. “I was calling for them to get the ball to the rim, and it never happened, other than Brady. He was there basically to grab offensive rebounds, because we couldn’t hit a shot.”

The loss dropped Grantsville to 4-3 in league. The Cowboys are next scheduled to face West Wendover (Nev.) on Wednesday at home.