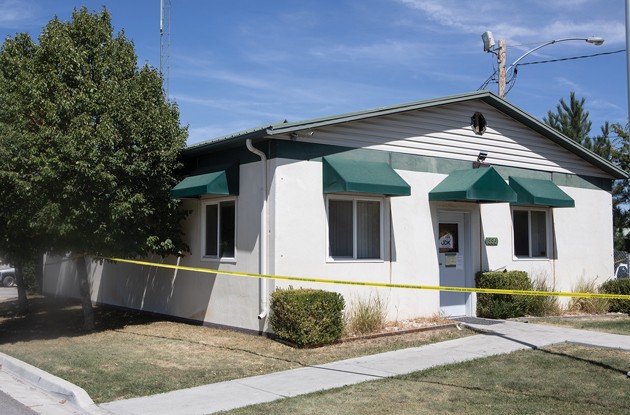 The Grantsville City Public Works building at 336 East Main was damaged in a fire on August 11.

A computer device used to monitor Grantsville’s water and sewer systems in real time was damaged in a fire inside the city’s public works building on Aug. 11, according to Mayor Brent Marshall.

The mayor reviewed details of the fire at Wednesday’s Grantsville City Council meeting.

“The SCADA system provides readings on water levels in lines, wells and pumps and issues alarms to public works employees, who are on call so they can respond,” he said.

SCADA stands for Supervisory Control and Data Acquisition with telemetry to record readings transmitted by radio.

“The SCADA system has been moved to the maintenance building and is currently working,” Marshall said. “We know it will fail in the future and we don’t know exactly how long it will last. We are now getting some strange numbers.”

About 16 public works employees are displaced since losing their office building, according to Grantsville City Public Works Director James Waltz.

The employees used to meet on workday mornings at the public works office, but now meet at Grantsville City Hall.

“We have had some difficulties, but we’re working through them,” the mayor said.

In addition to the SCADA system, other computers were damaged. Marshall said information from the hard drives had been downloaded and documents scanned and then the hard drives were shredded.

New computers have been ordered and employees are currently working with their laptops.

“A portable office has been ordered, but we don’t know how soon it will arrive,” the mayor said.

Marshall said insurance adjusters were scheduled to be in Grantsville on Monday and Tuesday to review the inventory of items lost.

The mayor explained that Grantsville City has an insurance policy that covers all City buildings, but the public works office did not have a high monetary value.

Insurance investigators believe the building is not a total loss and could be restored or Grantsville could receive a payout to build a new building. The mayor said the amount of the payout is still unknown.

It is believed the fire burned freely for a minimum of 30 minutes before neighbors noticed smoke coming from the building and called the fire department around 8 p.m.

It was determined the fire started at an outlet where a microwave oven was plugged in.