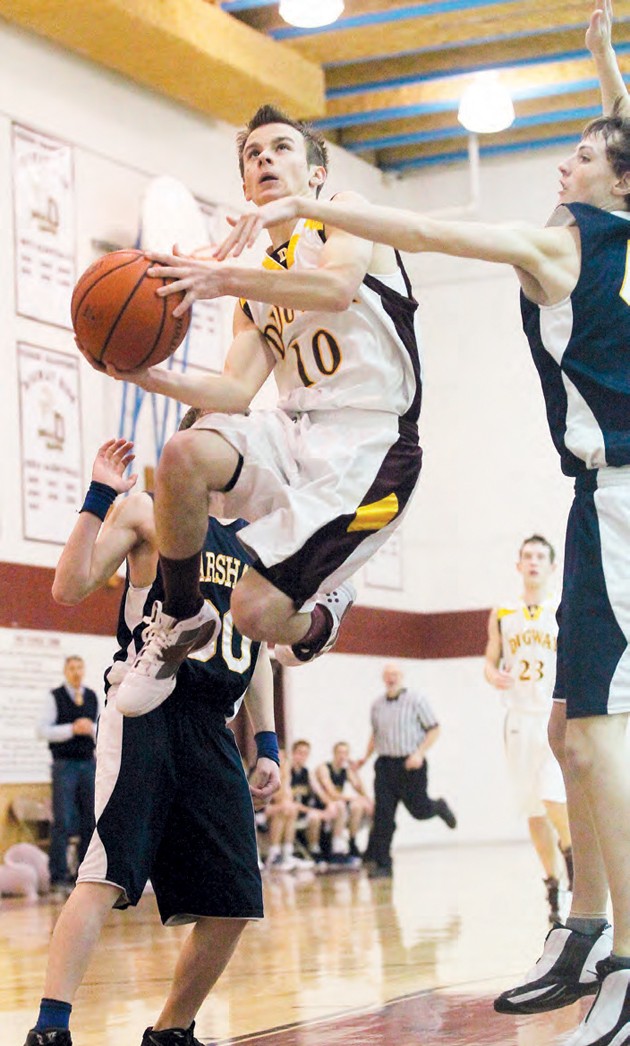 Dugway’s Sam Peterson (10) takes a shot Tuesday against the Rockwell Marshals. The Dugway boys conclude their season tonight at home against Liahona.

For three quarters, it appeared that Dugway had a lid on the basket as nearly everything they threw at the hoop wouldn’t go in while Rockwell Charter continued to hold a lead throughout.

The fourth quarter finally saw Dugway make progress on their home court as they outscored Rockwell 16-12 but it wasn’t enough to complete the comeback. Preston Hansen scored three points in the final minute, including a layup that helped give Rockwell a 38-33 victory Tuesday night in Dugway.

Sammy Peterson led Dugway with 19 points, including eight in the fourth when the Mustang offense woke up. Nathaniel Broadhead also reached double-figures with 10 points in the loss. Owen Feller led Rockwell with 15 points in the first-ever boys basketball victory in school history.

Rockwell started out redhot in the opening minutes as they scored the first seven points of the game. Travis Jenson capped the run for the Marshals with a 3-pointer to give his team a 7-0 lead with 5:59 left in the first.

Dugway had plenty of good looks at the basket against the Rockwell zone but couldn’t get anything to fall. Peterson helped to keep the quarter close with a pair of 3-pointers in the final two minutes that helped Dugway get within 7-6 after one.

Feller helped to rebuild the Rockwell lead in the second by scoring six of the first eight points scored by the Marshals. Feller capped the 8-0 run with a basket in the post to give Rockwell a 15-6 lead at the 5:10 mark.

A layup by Broadhead and a pair of free throws by Peterson helped to put some life into Dugway and get them within five points but Rockwell finished off the first half strong. A basket by Feller and two free throws by Trevor Jenson helped to give Rockwell a 19-10 lead at the break.

Dugway was able to chip away at the Rockwell lead slightly in the third by compiling a 7-2 run. Broadhead capped the run with a layup that got Dugway within 24-17 with 53 seconds left. A pair of free throws by Hansen gave Rockwell a 26-17 lead heading into the fourth.

Missed free throws really hurt Dugway’s chances of constructing a comeback as they only made 2-of-10 from the charity stripe. Even with the foul line difficulties, Dugway managed a 6-1 run that was capped by a layup by Peterson to get within 33-27 with 2:01 left.

Dugway missed four consecutive free throws after the Peterson layup that dimmed any chances of a comeback. The closest Dugway would get would was five after another Peterson layup. Broadhead hit a shot at the buzzer for Dugway to again get within five but Rockwell still came away with the five-point victory.

Dugway will finish out their season today at home against Liahona at 6 p.m. and will not be in consideration for playoffs after falling to 1-6 in Region 18 with the loss.