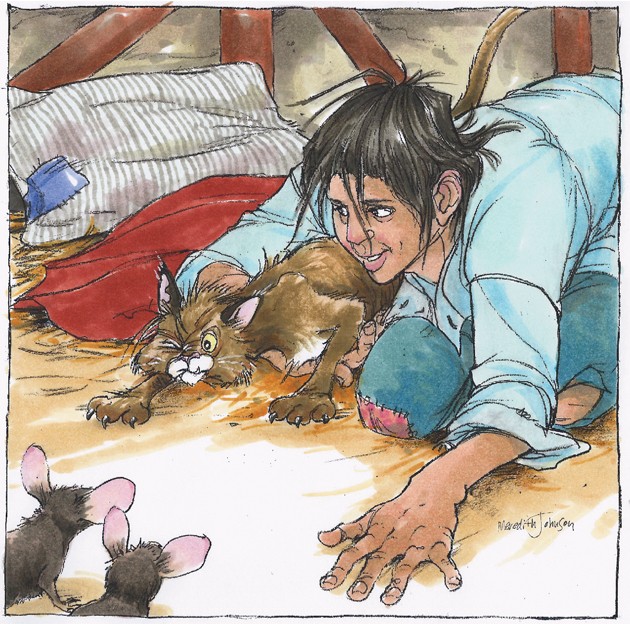 Dick Whittington was born in Yorkshire, and when he was just a boy, his parents died. He wandered from village to village, begging for food and shelter. When a family took him in for a day, a week or even a month, Dick listened to the tales they told, and he began to dream.

The people spoke of London, of streets paved with gold, and ladies and gentlemen dressed in furs, their pocketbooks heavy with money. They spoke of all the opportunities a fellow could have in the city. After a while, Dick decided he must try his fortunes there. Surely he would have success!

And so one day he hopped a wagon headed for London. When they arrived after a few days, the driver let the boy off in the city.

“Here you go, lad,” the driver said, and off he went, leaving Dick to ponder this strange place.

The streets weren’t paved with gold, after all, and although some people looked prosperous, others looked very much like the Yorkshiremen he knew, but here everyone teased him about his dirty hands and face. For days he wandered the city begging for food and shelter, but no one even looked at him. This wasn’t a beautiful city, after all; it was a cold, hard place.

One day he knocked upon the door to a beautiful home to ask for work. To his delight, the fellow who answered was friendly.

“Come in! We’ll find you work in the kitchen,” the man said. Dick would have been the happiest boy on earth, but the cook was cruel. She sent him to sleep in the attic, in a room that was full of rats and mice.

When his employer paid him, Dick decided he must use his money to buy a cat to eat those rats and mice — otherwise he’d never have a good night’s sleep. And so he bought a cat and called her Puss, and he sneaked her into his attic room. He knew if the cook found out, she’d throw them both out.

Puss turned out to be a fine hunter, and soon Dick Whittington and Puss were sleeping peacefully, with no rats or mice anywhere in sight.

Many months passed this way, until one day Dick’s boss called all the servants together to tell them he would soon set sail for the East.

“I’ll take whatever you have to give,” the man said, for in those days it was customary for servants to offer something to each ship that set sail. This way, each servant could send something without paying either custom or freight, and the ship owners thought they would be blessed if they allowed the poor to join in their good fortune.

And so one by one the servants offered up their gifts, but when it was Dick’s turn, he blushed with shame.

“Alas, I’ve nothing to offer but my cat,” Dick said.

“Then bring the cat,” said the merchant.

Dick was terribly sad, but he had no choice but to part with dear Puss. As he handed over the cat, he had tears in his eyes. He would miss his good friend, and now he would be bothered once again by mice and rats.

So the merchant set off with all his gifts, including the cat. But the other servants began to tease poor Dick. “Who sends a cat out to sea?” they laughed. “Everyone knows cats get seasick! Only a cruel man would do such a thing.”

After a few days of this, Dick could no longer bear their taunts, and so he packed up his bag with his one pair of trousers, his two shirts and three pairs of socks, and he left to find a better place to live.

After he had walked a long way, he sat down on the steps of a church to rest, and suddenly the church bells began to chime. He listened closely. True, he was hungry and tired, but he was sure those bells were singing to him, singing a song about Dick Whittington, the future mayor of London.

This gave Dick the will to return to the house. “I simply must work harder,” he said, and so he went back.

Meanwhile, the merchant’s ship encountered a storm and lost its way at sea. At long last, the sailors saw land and sailed to the coast of Barbary. There the Moors greeted the exhausted crew, and the merchant began to show them his wares.

The king was impressed, and he invited the merchant and his sailors to join him in a feast. They all sat on the rich, beautiful carpets, but no sooner had they tucked into a delicious feast than mice and rats appeared from every corner and began to nibble at the food.

This gave the merchant a grand idea. “I know a way to help you,” he told the king, and he sent one of the sailors to fetch Puss.

The moment Puss entered the hall, she began to chase the mice and rats. They fled for their lives, and soon the hall was free of the creatures. Exhausted, Puss lay down to rest and soon fell fast asleep.

The king was overjoyed. “I’ll give you a fortune for this creature,” he said.

Naturally, the merchant agreed, and soon the sailors were filling the ship with treasures.

The next day, they set off for home.

When the merchant returned home, he sent at once for Dick Whittington. When Dick arrived in the study, the merchant smiled.

“You’re a wealthy man now, Dick Whittington,” he said, and he handed him a sack of gold. “It was your cat who earned me a fortune.”

Dick was overjoyed, of course, and he thanked the merchant. He was so happy, he purchased gifts for everyone in the household, including the cruel old cook.

The next day everyone in the house was amazed to see the new Dick Whittington: He was clean and groomed, dressed in a fine suit and shiny shoes.

Even the cook stared and said, “I never knew you were such a handsome fellow!”

The merchant’s daughter stared, too. She had always pitied the young man, and now she fell in love with him.

Dick fell in love with her too.

So they married, and the mayor and the politicians and dukes and duchesses and everyone of importance in London came to the wedding, for the story of how Dick had earned his fortune had spread far and wide.

Dick Whittington and his wife lived happily together. They had many children they taught to be kind and hardworking. Mr. Whittington, as he came to be called, became sheriff of London, and then he became the Lord Mayor. During the last year of his mayoralty, King Henry V invited the Whittingtons to the palace to dine.

Everyone spoke of Dick Whittington’s character — his kindness and generosity. Indeed the king was so impressed that he honored him with a knighthood.