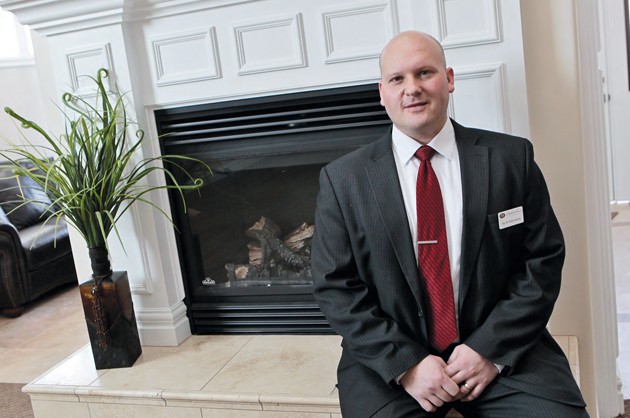 J.R. Didericksen poses for a photo at the new Didericksen Memorial Building Wednesday afternoon in Grantsville. The new building is located at 87 W. Main Street.

After a few nomadic years, Didericksen Memorial has a place to call home.

J.R. Didericksen, owner of Didericksen Memorial at 87 W. Main in Grantsville, said the completion of the building is a tangible, cemented symbol of the fulfillment of his plan for the business he has built over the last few years.

“It seems like it’s been three years in the making, but we’re there now. It feels good,” he said. “It was always the plan. When I decided to jump ship from my previous career, it was always my plan to end up here.”

Six years ago, Didericksen was a financial attorney, representing banks in court against borrowers who had failed to repay their loans. The job took an emotional toll, though, as people lost homes or vehicles, he said. One case, against a soldier who had just returned from the Middle East, was the last straw. After that he began to consider other careers. In December 2007, he attended the funeral of one of his former teachers, Gary Callister. There, he noticed the funeral directors interacting with the family, and was struck by a thought to look into that field.

“The idea just crossed my mind that this was something I ought to look into,” he said. “I could be a comfort to families, and it would be rewarding helping people through possibly the most difficult time in their lives, and that it would be quite a change from what I was into before.”

To do that, Didericksen had to start over with his education. He enrolled in the mortuary science program at Arapahoe Community College in Littleton, Colo. After completing the requisite courses and an apprenticeship, Didericksen graduated in 2009.

Immediately after receiving his certification, he quit the mortuaries at which he had worked during his apprenticeship, and struck out on his own. The work turned out to be challenging, but rewarding and enjoyable.

When he started his full-service mortuary, he joined Tate Mortuary as the second funeral business in the county. A third, Dalton-Hoopes Funeral Parlor, joined that list last year. Before the Didericksen Memorial building was completed, all embalming and body preparation occurred at a mortuary in Salt Lake, with which Didericksen had a contract. The new building has on-site capabilities for body preparation, he said, though cremations are still done at a crematorium in Salt Lake.

Didericksen said his business’ growth has been steady if slow, which he expected given the nature of the field.

“People don’t shop for a mortuary in the phone book, like they maybe would a plumber or an electrician,” he said. “It takes time — and I knew that — to develop the confidence and trust in the community. My business comes from referrals — that’s the big part of my business is referrals — and that takes time, but year to year, I’ve grown.”

The other part he could anticipate, the interaction with families, has also proved to be true, he said, and has been even more enjoyable than expected. Some, however, can be more difficult than others. “That’s where I’m most comfortable, is with families. Depending on the circumstances — for example, if it’s a tragic death, then there’s always going to be a higher emotion when dealing with that, the loss of a child or the loss of a young parent or a car accident. Those are going to be harder and the emotions are going to be higher,” he said.

“The toughest funerals I have are the ones I relate most with, like a young parent, whether it be a mother or a father, that’s close to my age, and you see the spouse bring the children to the service,” he added. “You can’t help but relate to what they’re going through. Those never get easy.”

Didericksen said besides his family roots to the area, he likes being based and performing services in Tooele County because of the close-knit community. The connection people have to each other, rather than in a larger, more metropolitan community, appeal to him.

“I know who I’m serving and I’ll most likely see them again, in the grocery store or something. That’s one of the biggest rewards, so see someone you’ve served and they come up and give you a hug and say ‘thank you,’ and you have a bond with them. That’s the biggest difference.”

A ribbon-cutting for the new building will be Jan. 18 at noon, while an open house for the building is planned for Jan. 26 from noon to 4 p.m.