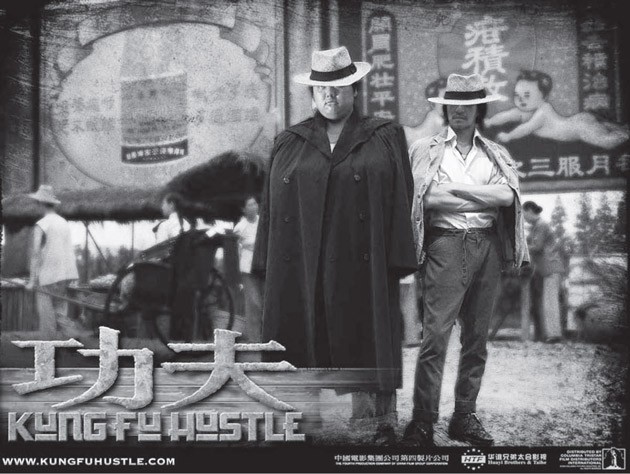 May 3, 2005
Director having good time in Kung Fu Hustle

It’s refreshing to see there’s a director out there who doesn’t take himself so seriously.

Stephen Chow’s work (which includes Shaolin Soccer) is anything but pretentious.

He’s just in it for the pure joy of making movies. And it’s evident, in Kung Fu Hustle, that he’s having a walloping good time.

It has the visual punch of Crouching Tiger, Hidden Dragon, the manic physical comedy of The Mask, and the savage barbarism of a Roadrunner cartoon. Chow seems to have been heavily influenced by the Roadrunner, a master of impassive violence.

But somehow, watching a real human head get bashed into a five foot hole in the concrete doesn’t seem much worse than watching it happen to Wile E. Coyote with a boulder.

Here is the big difference though — and it might seem like a contradiction — but the big difference is that, when all is said and done, Looney Tunes are cartoons for kids, and Kung Fu Hustle is a lustrous example of great, genre-defying film.

Often, the highest quality films aren’t as audience-friendly as the masses want them to be. Kung Fu Hustle is one of a few films that is both continuously, wildly entertaining and a technical bull’s-eye.

Chow stars as an ersatz bad guy; a mop-topped transient named Sing who wanders the streets stealing and bullying in 1930s Hong Kong. He unwittingly stumbles into a fierce war between the suave and powerful Axe gang and the dirt poor residents of Pig Sty Alley.

But Chow doesn’t take over star duties until audiences have been properly introduced to a myriad of colorful and certifiably wacky characters: a cranky landlady (Yuen Qiu) in curlers who’s shrill scream can wipe out villages; a pair of musical assassins who magically pluck sabers from their instruments; and a flip-flop wearing asylum inmate named The Beast who (surprise surprise!) is the greatest warrior in the world.

The Axe gang recruits The Beast (Leung Siu Lung) to help them bring down Pig Sty Alley, which has been more of a challenge than they anticipated. Pig Sty Alley has masters of combat among them.

When The Beast comes to town, however, Pig Sty Alley must find their own hero to come face to face with the greatest fighter any of them have ever seen.

Chow pokes fun at the classic Kung Fu genre as well as American movies including The Shining and Spider-Man. The clever pop culture references are just one of the many surprises of Kung Fu Hustle. The movie, unfettered by the distractions of labored, serious writing and directing, exudes untroubled mirth.

• Lemony Snicket’s A Series of Unfortunate Events If you’ve read the books, you already know that these are very adult themes — themes that careful parents may shy away from in an effort to protect young psyches. But one of the treasures of the film is that it acknowledges the very real weight of a child’s life. But it in turn also teaches them hope and perseverance.

Jim Carrey bounces tirelessly off dusty walls as Count Olaf. But it is in the casting of three achingly callow unknowns as the Baudelaire children that the movie finds its success.

They show how the death of loved ones can be at once a driving force and a crippling roadblock. They find a disturbing sense of tranquility in their grief. And all the while they know they must simply do the work of surviving. This is where Harry Potter and his movies have failed all along: they have yet to reach the crescendo of crushing sadness that plagues the heroes of these beloved works of children’s literature.

In their Gothic world of sticks and gray and stones, the little Baudelaire’s nurse a serene and abiding trust in one another.

Their plight is tragically regrettable, but as they demonstrate, they have each other. And with that message, this dark children’s movie becomes a supremely optimistic one.

• Blade: Trinity I’m going to count my blessings and be glad that this isn’t nearly as gory and out of control as Blade II: Bloodhunt was. And there is some campy greatness in the performances of psycho vampire Parker Posey and vampire fighter Ryan Reynolds. But there are some big problems here. You see, most writer/directors think you should choose one plot and stick to it. But David S. Goyer decided that instead of going with just one plot possibility, he could go with several. Which is great, because that means we end up getting six Blade sequels for the price of just one. Plus, we get to see Blade degenerate into something that is simultaneously cool and heartless and heroic. We get to see Blade looking a little like M.C. Hammer, scuttling about with Dracula in a confused fashion, wearing his enormous belt and mysterious sunglasses and black balloon pants, with that soundtrack in the background.